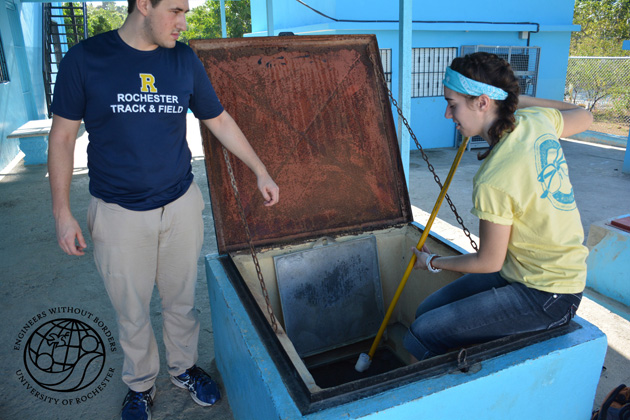 (Grace Caza '17 of Mechanical Engineering and Francis Cunningham ’15 of BME, members of Engineers Without Borders, test the water in a cistern at the school their chapter is working with in the Dominican Republic.)

At Santa Maria Josefa Rosello Escuela Taller, a primary school in Don Juan, Dominican Republic, the teachers want the same thing for their students that teachers want for their pupils in the United States.

“They want their kids to be able to read and write,” said Emily Kwan ’16 of Biomedical Engineering. “They want more materials for their kids so they don’t have to always share.”

And they would like something that American teachers take for granted: A safe, reliable water supply.

Kwan and more than 30 other students in the University’s Engineers Without Borders chapter are determined to provide that water for them.

Five of the students, including chapter president Kwan, just returned from a 10-day assessment trip to Don Juan. The group plans to build a water filtration system for safe, potable water free of contaminants, and to install solar panels at the school. The panels will provide energy to pump water from an existing 140-foot-deep well into a cistern, and to power the filtration system.Until recently, the school relied on an erratic municipal electric supply (that operates between 3-4 hours per day) to pump the water from the well. Now, a solar pump is being used to provide running water for use in the schools restrooms. Water for drinking, cooking and hand washing has to be purchased from a local filtration site, and then transported to the school.

“The system they have now is very costly and not sustainable in the long term”  -- especially given that the school plans to expand from 400 pre-K through 8th grade students to 500, said Grace Caza  ’17 of Mechanical Engineering, one of the program coordinators.

The chapter has made a five-year commitment to not only work with the community on a installing a reliable water system, but to also help train the community to maintain that system long after the EWB team has left.  “When we leave after five years it should be as if we were never there,” Caza said.

In the meantime, the students are gaining global perspectives as well as organizational, communication, and fundraising skills that will serve them well in their future careers. 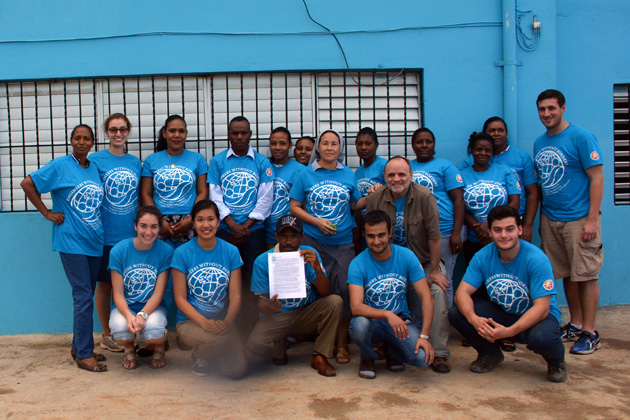 (Members of the UR assessment team pose with the Association of Fathers, Mothers, and Friends of the school, showing the signed official program documents.)

The moment they arrived in Don Juan, Kwan and Caza recalled, they were “swarmed” by children. “It was so welcoming, and such a great feeling,” Caza said.

In Don Juan, a rural town in Monte Plata Province, music plays all day, people welcome strangers with open doors, children go in and out of every house, and neighbors know each other as well as the members of their own family, Caza said. Motorcycles are more common than cars; each morning the bread deliveryman arrives “carrying six feet worth of bread on the back of his motorcycle,” Kwan noted.

The global perspective these students are gaining extends beyond mere sights and sounds, however. For example, running water in Don Juan is pumped to tanks on top of the houses; none of the houses have hot water.

That might not be acceptable here, but people in rural areas of the Dominican Republic are accustomed to it, and do not consider hot water a priority, Caza said. “One thing we learned from our assessment trip is that with a community-driven program like this, we have to design in accordance with the standards and expectations that the school community has.”

As part of their assessment, the students compiled lists of project supplies that will need to be purchased, then visited hardware stores in Don Juan, Monte Plata and Santa Domingo to determine what equipment and materials are available locally. This would help to save shipping costs and to further support the local economy, thereby making it easier for the school community to maintain the system.

To test the water supply, the students used a portable micro-bacterial laboratory kit that can incubate samples using body temperatures. The students took turns sleeping with samples taped to their stomachs and arms to “incubate” the cultures for testing.

Gary Moore, a Philadelphia-based engineer, is the EWB chapter’s professional mentor. Moore, Director of Operations at Bryant Associates, has designed solid waste, wastewater and water engineering projects in Iraq, Haiti, the Bahamas, Serbia, Kyrgyzstan, Kazakhstan, Afghanistan, Egypt, and South Sudan. Francis Cunningham ’15 of BME, who served as a health and safety officer during the assessment trip, said the group connected with Moore while speaking at an EWB regional conference. Moore’s technical insight has proved invaluable in helping the team develop their preliminary design plans.

The program has energized the University’s EWB chapter, which has not only increased its membership, but also refined its organizational structure. In addition to weekly “working” meetings for members, a 10-member executive board also meets every week to keep the chapter on track.

“Now that we have the ball rolling, we have to keep up with it,” said Kwan. She puts a high priority on recruiting not only engineering students, but non-engineering students from fields such as accounting and marketing, who can greatly benefit the program. She also wants to make sure all new members are fully integrated into the program and are recognized for their contributions, whether they are designing a flyer for a campus event or drawing up plans for the water system itself.

“We may be a small club, but we can make a huge difference,” said Caza. “Starting small, and going through the whole learning process, with not just the chapter but the school community itself, has been so inspiring.”

“While engineering is a technical business, a lot of it comes down to communication,” she added. “We are helping communities achieve the level of life they want by the means they see fit. It’s a learning process, and just being part of that process has motivated my desire to study engineering and pursue a career in community driven development programs.

To donate, learn more, or ask a question: 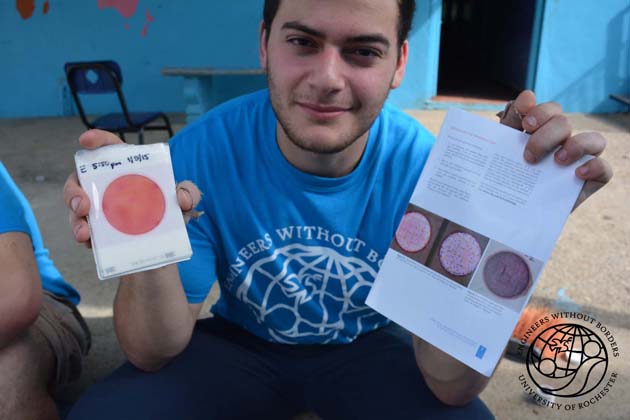 (Above, Adam Hartman '15 of biomedical engineering, a member of the Engineers Without Borders team, shows the E.coli test results that had been incubated on his arm overnight. Fortunately, there is no presence of E.coli in the school water.)