A rising leader in optics

These terms, used to describe Katie Schwertz '08 as an undergraduate at the University of Rochester’s Institute for Optics, continue to apply.

The senior design engineer at Edmund Optics is making her mark as a leader, a role model for women, and an advocate for gender equity in her field.

In 2019, for example, she was elected a director of SPIE, the International Society for Optics and Photonics, for a three-year term starting in 2020. She also was one of 20 “inspiring engineers” profiled in a video collection produced by NBC News Learn for use as education material for teachers, students, and parents.

Schwertz has also served on the SPIE Education Committee and a SPIE Gender Equity Task Force that was established in 2015 to identify how the professional environment and culture of the community can better enable equal opportunities, rewards, and recognition for its members, independent of gender.

She was also featured in a SPIE Women in Optics monthly planner in 2015, a spiral-bound desk calendar featuring stories and pictures of optics and photonics professionals making a difference in the world through their work.

“In addition to the amazing technical advancements enabled by optics, the work done by our community to make it more inclusive and diverse constantly amazes me and makes me proud,” Schwertz says.

However, in a 2017 Electro Optics article on gender equality, she urged people to recognize that equity problems still exist within the field, even if they don’t experience those issues themselves, and there’s still work to be done to improve gender equity and diversity as a whole within the optics community.

‘One of the top engineering students’

Schwertz, who grew up in Buffalo, NY, says “Looking back, I did a lot of things that made sense that I would go into engineering. I played a lot with building blocks. I definitely liked logic puzzles and problem solving.” She also enjoyed math and science in high school, but “I thought I never wanted to be an engineer or scientist because I had this stereotypical picture in my head—which I now realize is not the case—of being isolated in a lab with a computer.”

She came to the University of Rochester intending to major in statistics, but then, upon the advice of another student, took Professor Wayne Knox’s introductory optics course. She learned why a rainbow forms, and why insects can appear iridescent. “That was the first time I really connected scientific principles to nature and the way things work,” Schwertz says.

She switched to optics.

As president and social chair of the student chapter of the Optical Society of America Schwertz was instrumental in getting undergraduates involved in outreach programs that incorporate the OSA’s “optics suitcase.” The interactive package of scientific concepts was developed and produced by the late Professor Steve Jacobs at the University’s Laboratory for Laser Energetics and distributed to elementary and middle schools throughout the world.

She also helped organize tours of local companies and brought speakers on campus to talk about job applications and various career paths.

“She was a tireless advocate for the organization,” says Lisa Norwood, assistant dean in the School of Engineering and Applied Sciences. “As a result of her superb networking and public speaking skills, combined with her excellent grasp of the field of optics, she is one of the top engineering students I have worked with.”

Schwertz was “one of the most conscientious, hard-working undergrad students that I have ever encountered,” adds James Fienup, the Robert E. Hopkins Professor of Optics.

She was recipient of the Iota Book Award, given to sophomores who show outstanding scholastic and leadership qualities during their first year. She was elected to Phi Beta Kappa and the National Society of Collegiate Scholars.

After graduating from the Institute, Schwertz earned a master’s degree at the University of Arizona James C Wyant College of Optical Sciences, where she received the Optical Society’s 2009 Harvey M. Pollicove Memorial Scholarship. The scholarship is given annually to an outstanding student pursuing a degree in the field of precision optics manufacturing.

“Katie’s passion for optics shines through in the research she is conducting at the University of Arizona,” said Donald Golini, member of the scholarship’s advisory committee. “She has a real interest in applying her knowledge and expertise in optics in a way that will benefit the optics manufacturing field as a whole.”

‘Have confidence in yourself’

As a senior design engineer at Edmund Optics, Schwertz is responsible for executing and iterating optical subsystem designs, tolerancing, analyses, and prototype evaluations in compressed timeframes for both internal development and external customers.

She also excels at communicating her passion for what she does to a general audience.

“Have confidence in yourself,” she advises students in a profile on the SPIE website. “You are not always going to know the answer to something, and that's ok! It's important to know when you can provide useful information and when to say ‘I don't know' and then go figure it out. I learned so many things on the job that I think it's important to recognize that you don't have to know everything from the start - you will do better in both your academic and professional careers by continuously learning, observing, and having a willingness to accept help.”

And in her video for NBC News Learn, she explains that “Engineering moves society forward. The things that you use, the things that you rely on, the new technology that comes out that you want, that all relies on different fields of engineering. It's really cool to see something that you've created or something you've worked on then be used out in the real world.

“That's what I love about engineering.” 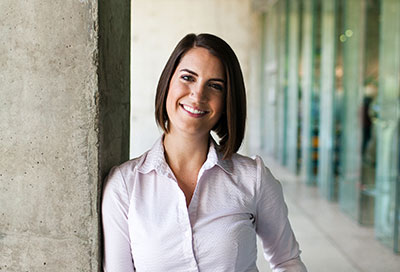