Donna Strickland ’89 (PhD) still recalls the visit she took to the Ontario Science Centre when she was a child growing up in the town of Guelph, outside Toronto. Her father pointed to a laser display. “‘Donna, this is the way of the future,’” Strickland remembers him telling her.

Lloyd Strickland, an electrical engineer, along with Donna’s mother, sister, and brother, was part of the family that “continually supported and encouraged me through all my years of education,” Donna Strickland wrote in the acknowledgments of her PhD thesis, “Development of an Ultra-Bright Laser and an Application to Multi- Photon Ionization.”

She was captivated by that laser display. And since then, she says, “I’ve always thought lasers were cool.”

Her passion for laser science research and her commitment to being a “laser jock,” as she has called herself, has led her across North America, from Canada to the United States and back again. But it’s the work that she did as a graduate student at Rochester in the 1980s that has earned her the remarkable accolade of Nobel Prize laureate.

When Strickland entered the University’s graduate program in optics, laser physicists were grappling with a thorny problem: how could they create ultrashort, high-intensity laser pulses that wouldn’t destroy the very material the laser was used to explore in the first place?

Working with former Rochester engineering professor Gérard Mourou, Strickland developed and made workable a method to overcome the barrier. They called it “chirped pulse amplification.” The groundbreaking research was recognized by the Nobel Prize committee with the 2018 Nobel Prize in Physics.

Strickland, now a professor at the University of Waterloo in Canada, and Mourou, now at the École Polytechnique in France, shared one half of the prize. The other half went to renowned physicist Arthur Ashkin of Bell Laboratories for his work to develop an equally field-changing way to use light, a technique known as “optical tweezers.” The technique involves using lasers to cool atoms to a temperature where they can be studied individually.

Strickland’s selection for the Nobel Prize was newsworthy for an additional reason: she was the first woman laureate in physics since 1963 and only the third since Marie Curie received the prize in 1903.

Strickland, who received her undergraduate degree at McMaster University in Ontario, came to Rochester for her graduate degree because of the University’s reputation as one of the top schools globally for studying optics and light. One day on campus, a fellow graduate student mentioned the lab of Gérard Mourou.

“I told someone at the Institute of Optics that I wanted to study lasers, and he said, ‘I know just the guy you’ll want to work with,’ ” Strickland recounts. As she told the University of Waterloo, when she walked into Mourou’s lab at the Laboratory for Laser Energetics, “it was full of these red and green lasers. I just said, ‘Oh my God. It’s like working around a Christmas tree all the time. How fabulous is that?’ ”

As laser science grew as a discipline in the 1980s, researchers were incrementally increasing the intensity of laser pulses, resulting in damage to the amplifying material. Mourou had come up with an idea to clear the hurdle by perfecting the technique known as chirped pulse amplification. The technique involved a three-part sequence: stretching a laser pulse thousands of times so that the power was low; amplifying the pulse to higher intensities; and then compressing the pulse in time back to its exact original duration.

Mourou knew the pulse needed to be perfectly compressed, yet still retain its amplification, in order to make the technique work more effectively.

He had the idea to put amplification in the middle of the process—a novel concept at the time, according to Strickland. To make it work. Strickland tested different laser systems at the LLE to create laser pulses that were short and high powered, but that wouldn’t destroy the amplifying material. In 1985, she succeeded, demonstrating the stunning advance in laser power with the table-top terawatt laser, or “T-cubed laser.”

At the time, Strickland didn’t recognize the research would interest an audience outside the laser-physics community: “I was aware that it was going to be big for scientists working in high-intensity laser physics,” she says, “but I didn’t know it would have relevance for the general public so quickly.”

Changing the Field of Laser Science

Chirped pulse amplification has since paved the way for the shortest and most intense laser pulses ever created, making it possible to build more compact and precise laser systems.

This allowed laser technologies to be used more broadly, especially in medical settings. Chirped pulse amplification is instrumental, for example, in laser eye surgeries such as Lasik, to quickly slice open the lens of an eye without damaging the surrounding tissue. It’s used to accelerate protons in proton therapies to treat deep-tissue tumors, like those that develop in the brain. Beyond its medical applications, chirped pulse amplification is important in more precise machining of materials such as the cover glass used in smartphones. Mourou has also developed a technique to treat radioactive waste using the technology.

But the technique is also essential in basic physics research.

Scientists use ultrafast lasers like those housed at the Laboratory for Laser Energetics to create the extreme conditions found in space, allowing them to study star formation and the inner workings of distant planets. The technique also allows physicists to take ultrafast images of split-second processes at the molecular level in order to study how atoms behave.

Strickland has been getting used to the limelight. A hectic schedule of travel and speaking engagements took her to 11 countries in just the first year after receiving her Nobel Prize, according to the Toronto Globe and Mail. “Along the way, she has hobnobbed with Apollo lunar astronauts, talked shop with Queen guitarist (and astrophysicist) Brian May and had an audience with the Pope,” the newspaper reported.

As she told the British publication the Guardian, she doesn’t like too much focus to be placed on her gender. The fact that she is only the third woman ever to receive the physics Nobel—joining Curie, who received the prize for research on radiation, and Maria Goeppert-Mayer, who won in 1963 for discoveries concerning nuclear structure—is much less interesting to her than the science that earned her the award.

Buy she recognizes the gender disparity in the field.

“I never had a female professor as an undergrad or graduate student,” she said in an interview with Morgan Sherburne for University of Michigan news. “We’re still only at about 15% women in the field. We’re not at majority, or even at gender equity. We’ve moved the needle, but the question is: Can we keep moving the needle?”

She also stresses the need to improve public engagement with science.

“The point is that everybody needs to get on board," she says. "We read to our kids at bedtime because we want to have literacy, but what are we doing to make sure kids are equally fascinated by science?”

Part of that challenge is making sure scientists can explain their work to a wide range of audiences.

She shows how that can be done in a video for WIRED, explaining the inner-workings and importance of lasers, not once, but five times—to a child, a teenager, a college student, a graduate student, and, finally, to an expert (Mike Campbell, director of the Laboratory for Laser Energetics). Each time she moves through progressively more complicated concepts.

Interestingly, despite her seminal contribution, Strickland still wears glasses. As she told the Guardian, she refuses to get the corrective eye surgery made possible by her laser research: “I have great faith in lasers, but no one’s putting one near my eye.” 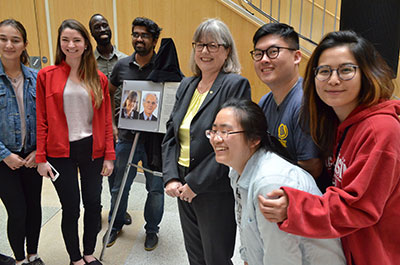 Nobel Laureate Donna Strickland ’89 (PhD) with Institute of Optics students and graduates at a ceremony to unveil a commemorative plaque in Munnerlyn Atrium.