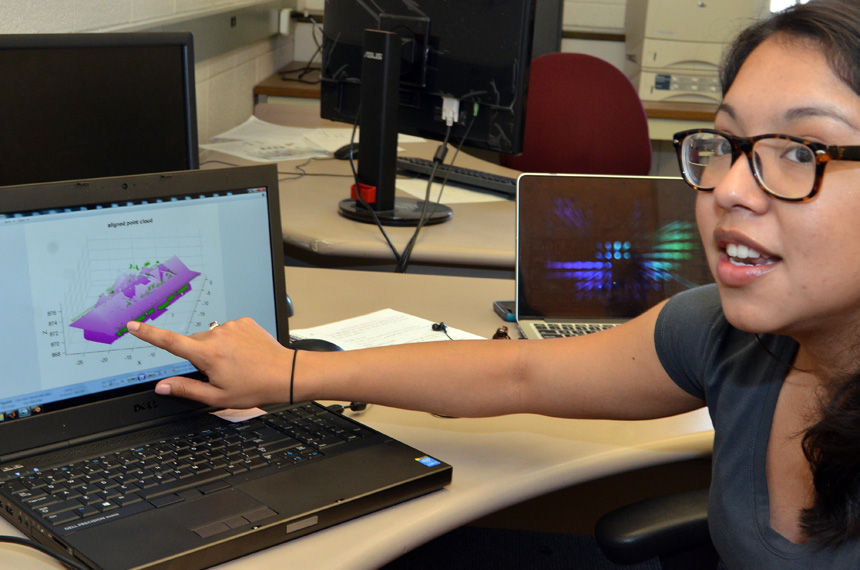 “Now that I have experience with research, I have another option to consider,” says Xerox fellow Ariana Cervantes.

Peter Christensen, assistant professor of art history at the University of Rochester, hopes to give voice to the people who "typically get written out of the historical record" — the often illiterate, poorly paid workers who actually constructed the historic structures that dot our landscape. In the process these workers often added their own flourishes to the standardized building designs they were given — flourishes that tell us much about their own heritage and local traditions.

Xerox fellow Ariana Cervantes, working with Christensen’s collaborator, Professor Gaurav Sharma of electrical and computer engineering, is helping to develop and refine the computational tools that will allow Christensen and other researchers to compare incredibly detailed scans of mass-produced objects for such flourishes of individual "authorship" – in this case the 19th-century train stations that Christensen and other students scanned in Canada and Turkey last summer and fall.

This is the first research experience for Cervantes, a rising junior in mechanical engineering. She admits she was a “bit nervous” coming into the program, worrying she might not have enough background to make a contribution.

Using an open-source program called Blender, she has created 3D models from the blueprints of what the stations were supposed to look like. Then, using both available open source software and programs developed in Sharma’s lab as part of its research in this area, she has compared them to the 3D scans that Christensen and his students recorded from the actual structures they visited.

“It’s been a really great experience,” Cervantes said. “I wasn’t thinking at all about grad school before this. I was just interested in going into the work force immediately. I’m still not 100 percent sure, but now that I have experience with research, I have another option to consider.”

Sharma, who is also mentoring Xerox fellow Matthew Dombroski this summer, said the Xerox fellows program has been a “great way to bring in new skills and new talent” into his lab. Both Cervantes and Dombroski are using tools that Sharma, whose expertise is in signal processing, did not previously employ in his lab. “It has been a learning experience for me as well,” he said.