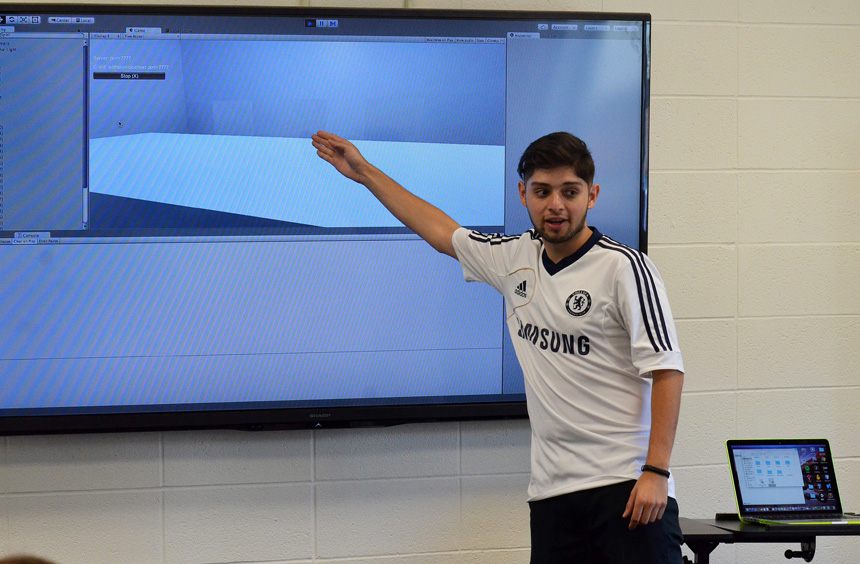 Hoque’s students are also working on understanding and influencing how an app can help entire groups of people interact more effectively – when they work together on a team project, for example.

“The goal is to develop a conferencing application that senses many aspects of human behavior to assess group dynamics,” explained Luis Nova, a rising junior in computer science who joined the group this summer as a Xerox fellow. Added Hoque: “A lot of people are spending time online doing videoconferencing, trying to reach a decision and collaborate with others to get work done. Is there a possibility for an automated system to give them automated and respectful feedback on maximizing their productivity?” This could be in the form of coaching, or a combination of private and shared real-time feedback and mediation when, for example, someone is spending too much time “monologuing.”

This is Nova’s first research experience, and he is already making a contribution.

When Hoque took Nova and other undergrads in his group out for lunch, to help them open up, Nova described his love for computer graphics, and suggested using a virtual reality approach for the group dynamic app.

“It’s a little detour from what we were planning to do, but I figure if he’s excited about it, I would let him run with it,” Hoque said.

“I think I learned more in the first month in terms of what I can do on my own than I have in my entire first two years of college,” Nova said.

This is the second summer in a row that Hoque has welcomed a Xerox fellow into his group. As a volunteer mentor, Hoque doesn’t get any extra pay, but doesn’t mind. “We have access to top students; we get to hand pick who we bring into our labs, and they are a great addition. The extra pay is the work they do. That’s the gain.”