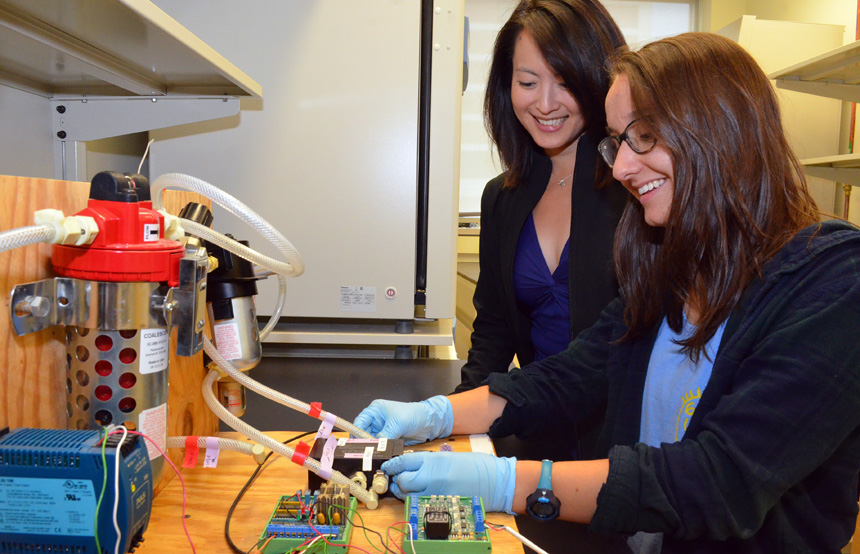 “I have learned more from a week of being in this lab than I probably could have in a semester of classes,” says Xerox fellow Breanna O’Reilly, a rising senior in biomedical engineering who is working with Associate Professor Catherine K. Kuo.

“Learning by doing is always the most valuable.”

Kuo’s lab studies embryonic tissue, specifically how it can be used as a model for growing tendon replacement tissue in a bioreactor. Tendons are composed primarily of fibers of collagen protein. Actual tendon cells and blood vessels are scattered in such small numbers along these fibers that it is difficult for damaged tendons to heal properly -- hence the interest in cultivating replacement tissue.

Part of O’Reilly’s work this summer is helping set up a bioreactor that is custom built by the Kuo lab.

O’Reilly has also been exploring a possible new research topic, spurred by something Kuo noticed from a prior experiment. Kuo simply told O’Reilly the name of a particular enzyme, asked her to research it and come back with possible ways it might be integrated into the lab’s research.

“I gave her a task typically given to PhD students, not to undergraduates, and she not only met my expectations but exceeded them,” Kuo said. “She’s amazing.”

“This went from a chemical I knew nothing about to being a possible PhD thesis,” said O’Reilly. “The ability to take something so simple and so succinct, and turn it into a project that could go years and have serious implications in what we’re studying – that’s not something you’re going to get in a classroom.”

She’s also had an opportunity to do some mentoring of her own. This summer, Xerox fellows interacted with high school students participating in an Upward Bound precollege program. At a kick-off event and subsequent weekly breakfast meetings, fellows described their projects, answered questions and, in turn, listened to the high school students share their own dreams. “I was a little tentative about doing it at first, but it ended up being a really wonderful experience,” O’Reilly said.

This is Kuo’s first experience with the Xerox fellows program, and she’s clearly sold on it. “The program was a huge help in providing the funds for Breanna to stay here for the summer,” she said. The benefits extend beyond having another person in the lab, or what they actually produce, she added. “It’s about mentoring young people to become scientists and mentors themselves. It’s the enjoyment of seeing them grow and become excited about research. I think it’s a great program.”