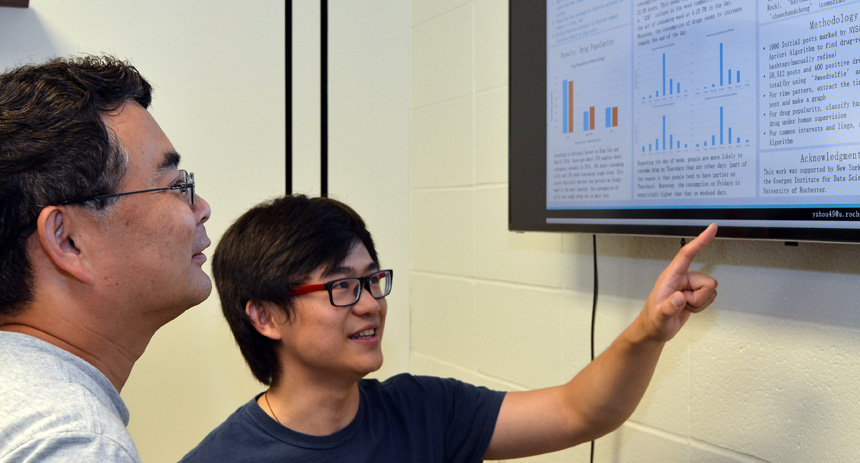 Jiebo Luo does not like to keep a promising research topic waiting, especially in a field as explosive as machine learning, computer vision and data mining. “If you sit on a project, three months later somebody else will have done it,” says the associate professor of computer science.

Moreover, “I don’t view teaching as taking place only in the classroom,” Luo says. “I also enjoy teaching students how to solve real-world problems through research.“

That’s why Luo has welcomed Xerox fellows like Yiheng Zhou, a rising senior in computer science, into his lab each of the last three summers.

Zhou began doing research for Luo last fall as a course project. He is using his Xerox fellow opportunity this summer to expand his previous work – using data mining to track Instagram for drug use and drug dealing – into a broader project linking various risky behaviors, such as smoking, drinking, drug use and eating disorders.

By accessing millions of postings on Instagram, Zhou can look for correlations between risky behaviors on a much larger scale that traditional studies that involve, say, 20 subjects who undergo interviews over a period of time.

“This work is important for understanding how risky behaviors affect each other, and also for prevention,” Luo said. “Maybe someone is not doing drugs, but is engaging in behaviors that we see in people who have gone on to drug use. That could prompt families and schools to help them in a pre-emptive fashion.”

Initially a chemical engineering major, Zhou switched to computer science because it interested him more as a future career. “I’m good at math, and programming is very cool,” he said.
He took Luo’s class on data mining last fall. “I wanted to give it (data mining) a try. Unless you put effort into it you will never know of you’re interested. As I put more and more effort into data mining, I felt more and more like it was something I would love doing.”

Zhou even turned down a promising summer internship with Ernst and Young, the multinational professional services firm, to stay on in Luo’s lab this summer.

Luo is grateful that the Xerox program enabled Zhou to do so, ensuring that a promising line of research could be expanded upon. “It’s as if all the stars are aligned.”