The names behind the awards 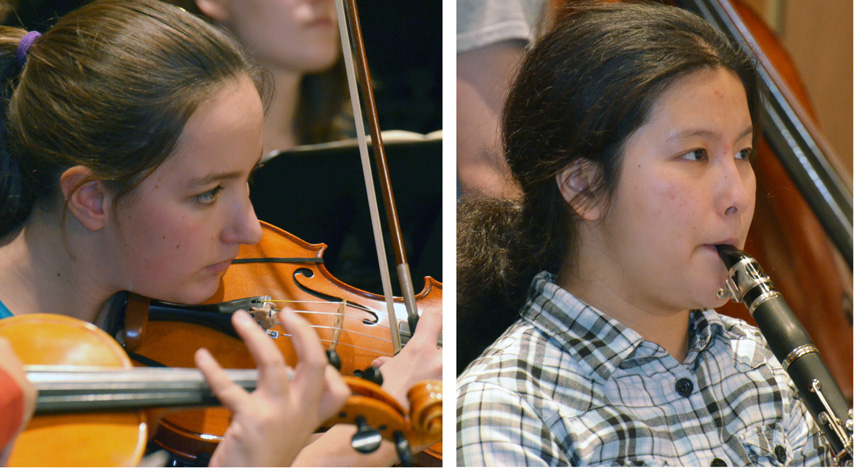 Seniors Joyce Zhu (at right) of computer science, and Wendy Snyder of mechanical engineering are this year’s recipients of the Robert L. Wells Prize for students who excel in both engineering and the humanities. Zhu is double majoring and Snyder is minoring in music. They are shown here rehearsing with the University of Rochester Symphony Orchestra, directed by David Harman, for a December concert of “fantastic finales” by Beethoven, Berlioz, and Brahms. (Photos by Bob Marcotte/University of Rochester)

At the Hajim School commencement each spring, the roll call of undergraduates who step forward to receive their diplomas is sprinkled with other names as well. Several of the awards these students receive from the school or their departments are named for alumni or former faculty members.

• The Emil L. Kuichling Award for juniors in mechanical engineering, named after the first student to receive a civil engineering degree at the University in 1868, who then distinguished himself as an expert in municipal waterworks.
• The Robert L. Wells Prize for seniors in engineering, named after the ’39 graduate of mechanical engineering who became a top executive at Westinghouse, was elected to the University’s Athletic Hall of Fame for his prowess as a varsity high jumper, and later served as a life trustee.
• The Richard Eisenberg Engineering Award for students in metallurgy, named after a University alumnus and professor in the Department of Chemical Engineering, who also endowed summer research fellowships for undergraduates.
• The Donald M. Barnard Prize for juniors or seniors, named after the ’49, ’56 (MS) mechanical engineering and ’77 Simon MBA graduate who, with his wife Janet ‘73W (EdM), ‘78W (EdD), also endowed a fellowship for PhD students in engineering or the sciences.
• The Gary E. Sommargren Research Award in optics, named for the ’72 PhD graduate of the Institute of Optics who received patents for multiple innovations in optical metrology at Lawrence Livermore National Laboratory and at Zygo Corp.
• The H.D. Polster Prize for seniors in optics, named for a former Institute of Optics faculty member (1948-54) who worked in optical thin films.
• The Helmut Weymann Prize in mechanical engineering, named for a former professor of mechanical engineering and materials science.
• The William Fujimara Prize for sophomores in optics, named for the ’59 graduate of the Institute of Optics, who survived the atomic bomb blast at Hiroshima to become director of optics technology at Eastman Kodak and honorary curator of technology at the George Eastman House International Museum of Photography.
• The William C. Britton Award for freshmen in optics, named for a ’48 graduate of the Institute.

The awards are important to the Hajim School for several reasons.

They celebrate and reward the achievements of students who seize the “full spectrum” of educational opportunities available to engineering students at Rochester.

They help reinforce the values and traits that the Hajim School holds important. The Robert L. Wells, award, for example, is given to students who demonstrate competence in both engineering and the humanities.

Anne Wells explains that early in their marriage, her husband bought the complete set of Great Books of the Western World, edited by Robert Maynard Hutchins. “Throughout his life he continued to read these books as well as histories and biographies,” she says. “He felt strongly that an engineer needed the balance of the humanities to be a competent engineer.”

Lisa Norwood, the school’s assistant dean for undergraduate studies, concurs. “Although engineers are problem solvers, as problems become larger and more complex, it’s important that our students are skilled at communicating with each other, their customers, and with other stakeholders in order to effectively solve these problems,” she says.

“Studying the humanities provides our students with the skills to clearly communicate their ideas with diverse audiences, facilitating multidisciplinary collaborations and generating creative ideas. This helps make our graduates well-rounded and socially conscious individuals.”

The prizes also serve as an enduring testament to the engineering alumni and former faculty members who have served the Hajim School well, by their gifts and accomplishments.

There are multiple opportunities to endow additional undergraduate and graduate awards and fellowships, and for loved ones or colleagues to do the same in honor of an engineering alumnus or former faculty member.