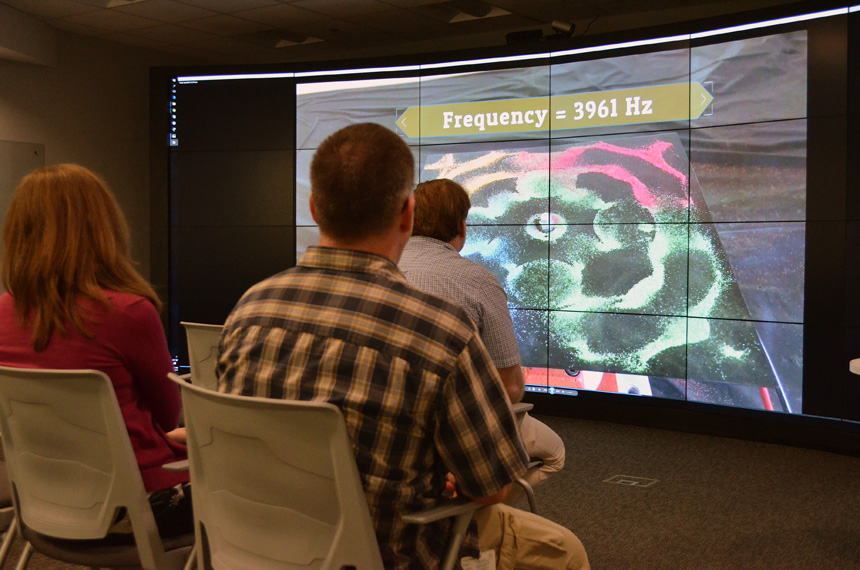 Hoda Ayatollahi's video, Art of Physics: Resonance Phenomenon, is shown on the screen at the VISTA Collaboratory.

Showcasing the beauty in science and engineering

Colored grains of sand formed striking patterns that became increasingly complex in a video shown on the huge screen at the VISTA Collaboratory.

The eye-catching illustration of a physics phenomenon called resonance is the creation of Hoda Ayatollahi, a PhD student in electrical and computer engineering. She hopes to “motivate people . . . to learn more about physics and science in general.”

Nearby, Dalia Mitchell ’20, a chemistry and biochemistry major, stood near her drawings mounted on a Carlson Library wall -- including one showing a bird inside a human ribcage. She wants to “make anatomy seem interesting to people, rather than something to shy away from.”

Ayatollahi and Mitchell had just been announced as the top finishers in the Hajim School’s Art of Science Competition, which drew 55 entries from across the University.

“This was an incredible competition this year,” said Hajim School dean Wendi Heinzelman. “We were hoping to get maybe 10 or 15 submissions, so we were just blown away by the level of enthusiasm.”

Twelve of the entries were videos, prompting the school to create a separate prize just for them.

Second place in the larger category of images went to Kilean Lucas, a PhD candidate in biomedical engineering. He used a scanning electron microscope to capture a single human red blood cell among several white blood cells on a silicon nanomembrane.

Third place went to Charlie Granger, a PhD candidate in optics, who used adaptive optics technology to show the natural fluorescence of retinal pigment epithelial cells, which form a layer only one cell deep, on the backside of the eye’s light-sensitive retina.

And the winners are (left to right): Hoda Ayatollahi, Dalia Mitchell, Kilean Lucas, and Charlie Granger. ( See and learn more about the prize winning entries.)

These and other submissions will be showcased on the walls of Carlson Library, at the Hajim School office suite in Lattimore Hall, and at other campus locations. They will also be exhibited at Clothesline Festival this fall.

“We absolutely love having the Art of Science on the walls of Carlson Library,” said Rochelle Mazar, assistant dean of academic engagement for the River Campus LIbraries. “It means that our patrons have the opportunity to marvel at the beauty and the wonder of science, to get curious about scientific research, and to become inspired to discover more.”

The competition, organized by Sandra Turner, a special assistant to the dean, “is an absolutely fantastic way to showcase the beauty that there is in engineering, science, and technology,” Heinzelman said.

“I think this competition highlights that beautifully, because you can see the most incredible images in things you never would have thought of.”

The 17 judges included Dan Menelly, chief science officer at the Rochester Museum and Science Center. He was “inspired by the talent and the creativity and the scientific rigor we saw in these works.

“I thought of a phrase by one of my mentors, Robert Penn Warren, who commented on the world’s ‘hieroglyphic beauty,’ and I thought ‘oh, this is what he meant.’ “ 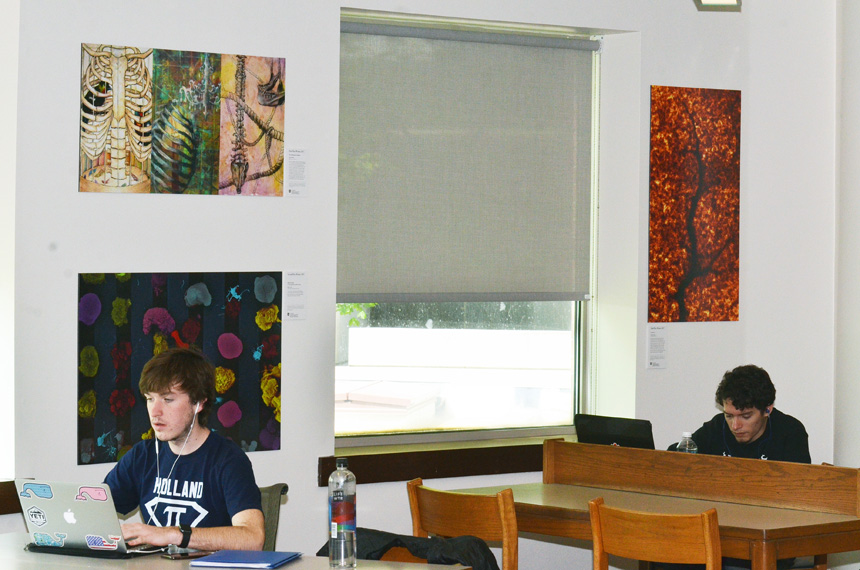 Conor Shanahan '19 of biomedical engineering (at left) and Gabriel Morales '17 of computer science study in Carlson Library. The three prize-winning images are mounted on the wall next to them.