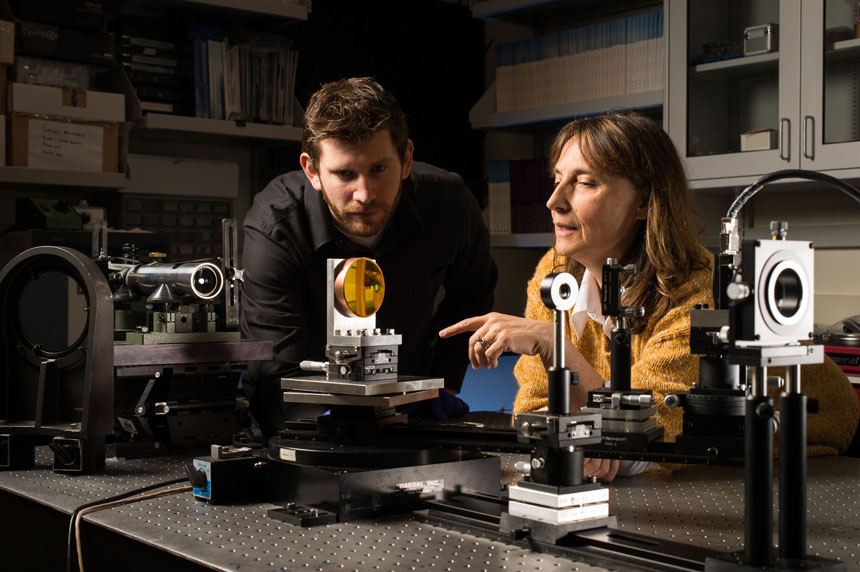 Jannick Rolland in the lab with Kyle Fuerschbach. (Photo by J. Adam Fenster/University of Rochester)

These are the adjectives that help explain why Jannick Rolland is the 2017 recipient of the Edmund A. Hajim Outstanding Faculty Award.

Rolland, the Brian J. Thompson Professor of Optical Engineering, joined the Institute of Optics in 2009.

Since then, she has:

• Helped shape the Robert E. Hopkins Center for Optical Engineering, which she has directed since 2012. It is now a shared instrumentation facility that promotes collaboration across departments, and recruits diverse undergraduates from optics and mechanical and chemical engineering into its research.
• Spearheaded the 2013 creation of the Center for Freeform Optics (CeFO), which she directs and which now has 16 corporate and research laboratory members. CeFO, a joint venture with UNC-Charlotte, brings the universities and companies together at the precompetitive research stage of a game-changing new technology. Freeform optics uses lenses and mirrors in a range of shapes to deliver increasingly compact, lightweight and easily targetable optical devices.
• Co-founded and is CTO of LighTopTech, which she launched in 2013 with Cristina Canavesi, based on high definition volumetric microscopy Canavesi helped develop in the Rolland lab. A liquid lens refocuses at different depths inside samples to obtain high-resolution volumetric images of materials. This allows medical professionals to rapidly and noninvasively image subcellular structures beneath the surface of the skin or within the human eye. It can also capture details inside materials to monitor the quality of manufacturing processes.
• “Produced some of the very best students,” says Xi-Cheng Zhang, director of the Institute of Optics and M. Parker Givens Professor of Optics. For example, Kyle Fuerschbach, one of her graduate students, was awarded the 2014 outstanding dissertation award in the Hajim School for pioneering work in freeform optics.

Dean Wendi Heinzelman concurs. “Jannick is not only a distinguished researcher, but also an incredibly effective leader. I cannot think of a more deserving candidate for this award.”

Rolland already had a distinguished track record in research and education when she came to Rochester. Recipient of a PhD in optics from the University of Arizona in 1990, Rolland served as a research assistant professor in the computer science department at UNC-Chapel Hill from 1992-1996. She then served as professor of optics at the University of Central Florida from 1996 to 2008, helping establish the Optical Diagnostics and Applications Laboratory at CREOL (Center for Research and Education in Optics and Lasers).

“Jannick is a force,” says Rob Clark, former Hajim School dean, now provost at the University of Rochester. “Her ability to integrate and apply very fundamental concepts in optics to very practical applications is, in one sense, an expression of art in science and engineering. She’s a very creative person; we’re fortunate to have her at the university.”

Jacob Reimers, a PhD candidate in her lab, can attest to that. “The first couple of years in her lab I felt like I learned more than I had in all my schooling previously. She asks a lot of her students, but we get back many times over that in return.”

Reimers joined Rolland’s group just as the Center for Freeform Optics was taking shape, and worked on one of the center’s first projects. He’s had an opportunity to meet and work with representatives from 20 to 25 companies; he’s been giving talks since his second year with the group.

“I feel like I’ve had so many advantages, just from being associated with Prof. Rolland,” he says.

Reimers appreciates her passion for research. “Whenever I have something exciting to show her, she’s also very visibly excited about it as well. We can share that excitement and talk about ‘where are we going from here?’”

“Her enthusiasm is contagious.”