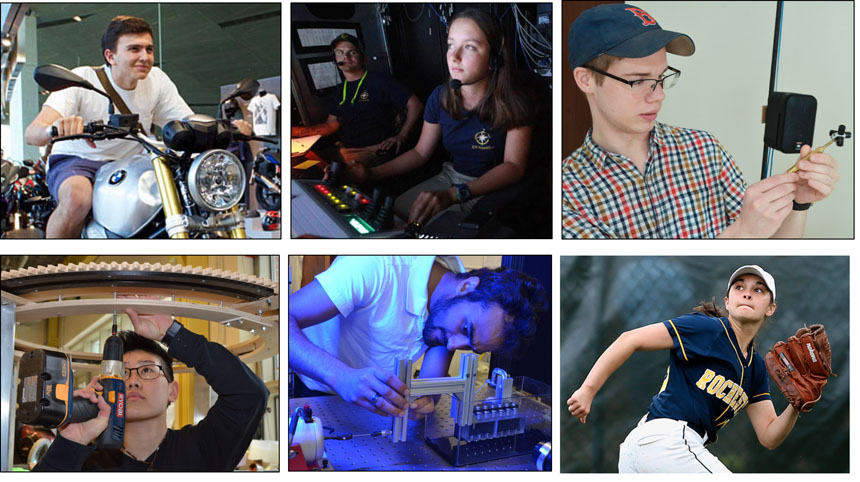 Left to right, top to bottom: David Lippman visits the BMW museum in Munich during his summer internship with Arnold & Richter Cine Technik (ARRI) in that city; Wendy Snyder pilots Hercules, a Roving Operational Vehicle, from aboard the Nautilus, a sea-going exploration ship; Matthew Dylewsky demonstrates an ambisonic microphone; Catherine Yip applies finishing touches to her team’s senior design project; Ibrahim Mohammad works in the laboratory as a Xerox Research fellow; and Haberly Kahn patrols the outfield for the varsity softball team.

The Charles L. Newton Prize — recognizing engineering students who show a special proficiency in an engineering subject and have conducted research, given a presentation or published a paper — is awarded to William Green of mechanical engineering.

The Richard Eisenberg Engineering Award — which recognizes hard-working undergraduates with an interest in metallurgy — is presented to Rahima Bah of chemical engineering.

The Robert L. Wells Prize — presented to senior engineering students for demonstrated competence in both engineering and the humanities, based on the highest-ranking seniors in the Hajim School as of the fall of their senior year — is awarded to Wendy Snyder of mechanical engineering and Joyce Zhu of computer science.

.The Tau Beta Pi Prize — for Tau Beta Pi seniors who, through academic achievement, proven leadership and sterling character, have excelled and inspired fellow students — is awarded to Jessica Bernstein of optics.

The G. Harold Hook Prize — presented to a student who has demonstrated outstanding interest in engineering — is awarded to Edward Ruppel III of biomedical engineering.

Albert K. Ackoff Award: Haberly Kahn, Unni Kurumbail.
(For the third year student, based on grades through the fall the junior year.)

The American Chemical Society Chemistry Achievement Award: Laurence Lohman.
(For the senior with an outstanding academic record who has done excellent work on a research project or independent study in applied chemistry.)

Award for Outstanding Teaching Assistant:  Mikayla Konst
(Given to a student who has provided outstanding support to professors as a teaching assistant, workshop leader and/or super leader during his or her undergraduate career.)

Excellence in Undergraduate Research: Chuyang Ke, Yiheng Zhou, Joyce Zhu
(Given to a student who has worked with an advisor on significant research, received awards or presented at conferences, or been published as a result of his or her work.)

Entrepreneurship Award: Anis Kallel
(Given to a student who has embodied the entrepreneurial spirit by creating a computing product or service and pursued its commercial development.)

UR Women in Computing Leadership Award: Euakarn Som Liengtiraphan
(Given to a woman who has made a significant contribution to leadership, to the design of programs and activities that build a stronger community in CSC, and to a level of service and a creative enthusiasm for UR WiC.)

MVP (Most Valuable Programmer): Daniel Rubery
(This student has been a valued member of various programming teams, such as the Association for Computing Machinery — ICPC team and the CS Games team, strengthening URCS' visibility among top schools.

Outstanding Senior:  J. Hassler Thurston
(Given to a student who has made outstanding contributions to the Department and its undergraduate program in academics, research, and student leadership, and who has gained the respect and appreciation of the Department community.)

Emil L. Kuichling Award: Alexander Boyd, Rebecca Walton
(To the junior who has shown the greatest proficiency in mechanics.)

Teaching Service Award: Alan Grier, Catherine Yip
(For outstanding contributions to instruction in the department during this academic year.)

H.D. Polster Prize: Jessica Bernstein
(Awarded to a senior who has demonstrated through academic performance or a special project, unusual ability in the field of optics.)

Faculty Prize: Sarah Bjornland, Joel Hoose
(Awarded to a senior who best exemplifies the ideals of character, scholarship, and service.)

Fujimara Prize: Jaren Ashcraft
(Awarded to a sophomore who represents The Institute’s values of academic excellence, research, and campus citizenship.)

Britton Award: Erin Sumfleth
(Awarded to a freshman who has excelled academically and, through his or her actions, demonstrates a keen interest in Optics.)

Dr. Kevin Thompson Prize: Brandon Dube
(Awarded to a student who demonstrates a keen interest in optical design and/or metrology.)