Chem-E-Car team moves up in the pack

Members of the Chem-E-Car team were jubilant when their car stopped in the last second before the time limit during a regional competition at RIT. Click here to see the video by Dawn Wendt.

Last year, members of the fledgling Chem-E-Car team at the University of Rochester took it in stride when their car would not start at their first ever regional competition. They were ecstatic just to get into the competition and pass the safety component.

This year’s team had even more to be excited about.

Not only did the car start; the team placed 11th among 21 teams competing at the RIT campus in regional contest the UR team cohosted. And they finished second in the poster contest.

“Although we by no means finished on the top of the pack, we were ecstatic that everything came together after all our hours of work,” says team captain Charles Chiang ‘19, who was also a member of last year’s team.  “I think there might be a video of me jumping for joy somewhere when the car stopped in the last second before the time limit.”

The competition, sponsored by the American Institute of Chemical Engineers (AIChE), features vehicles students build from scratch, powered by chemical reactions. Teams are given two attempts to deliver a load of water as close as possible to a distance determined an hour before the competition begins.

Last year’s Rochester vehicle was powered by a reaction of aluminum and oxygen.

“What threw us off our guard last year was, it wasn’t a reusable battery. So, we didn’t know before the competition how well it would work,” Chiang explains. This year the team came up with a reusable thermoelectric generator. “Basically, you have a container with hot liquid inside it and another with cold water inside it, and something called a Peltier cell in between, and that creates electricity based on the temperature difference.”

About 15 students showed up regularly to work on the car this school year, including five other members of last year’s team. “I was really happy with the amount of participation,” Chiang says.

“This is really a great opportunity to apply what we’re learning in the classroom to a hands-on project, and a great way to get to know students from other class years,” Chiang added. “They were all really great to work with.”

Next on the agenda: Planning for next year’s competition, of course. 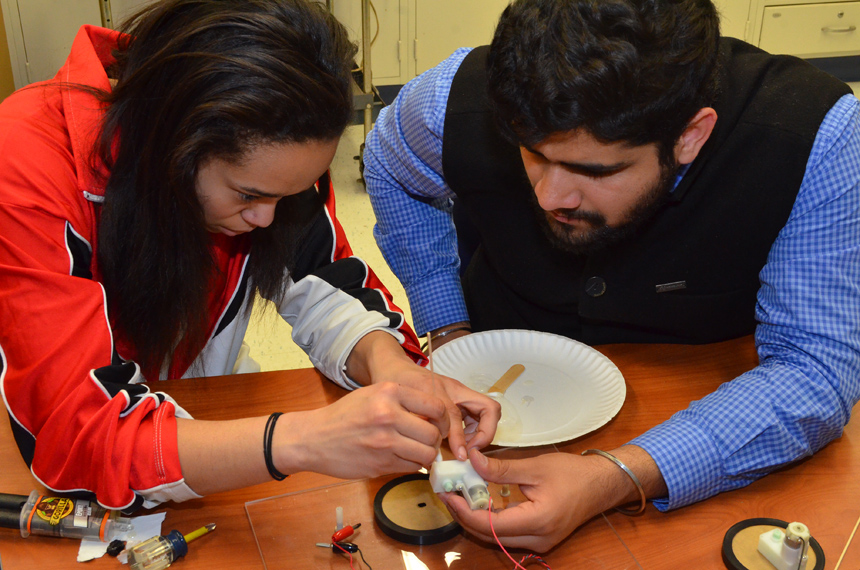