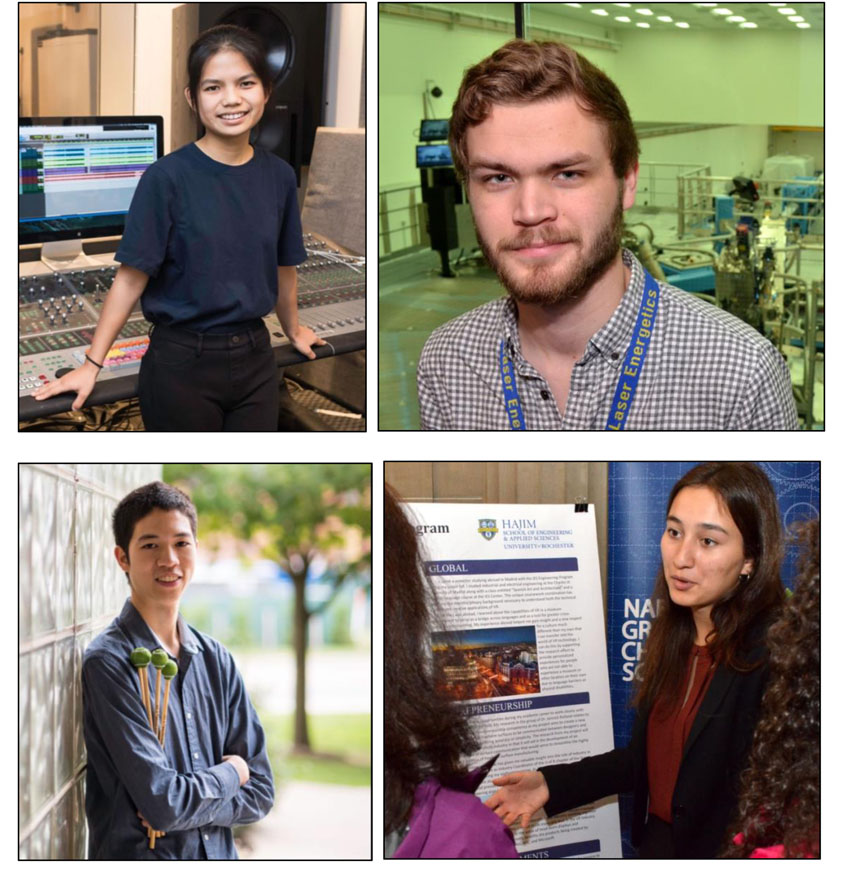 The Hajim School of Engineering and Applied Sciences is honored to bestow these 2019 awards on outstanding students.

This prize is awarded to students who show special proficiency in some subject connected with engineering, and who has conducted research, given a presentation, or published a paper.

Jackson was published as a first author in a recent paper, has presented at multiple conferences, and is also completing a Math major. Jackson will be pursuing his PhD in Computer Science at Carnegie Mellon University.

Andrew is currently completing a manuscript for publication, and is also a recipient of the Robert L. Wells Prize. Andrew will be attending Stanford University in the fall to pursue his PhD in Applied Physics.

Chantelle is a top student and has been included as a co-author in an upcoming paper. Chantelle will be pursuing her PhD in Biomedical Engineering at the John Hopkins School of Medicine.

Reem has been named a co-author on a recent paper published in a top journal, and has presented her research at a number of conferences. Reem will be going on to complete her PhD in Electrical and Computer Engineering at the University of Rochester.

The winners of this prize have all been accepted into graduate programs at the University of Rochester. They show high achievement and good personal qualities.

Robert has served as a TA for his junior and senior year and will be included as a co-author on an expected publication.

Mattie has excelled in her chemical engineering courses, and also dedicated herself to music as a member of Wind Symphony.

Muhammad is a Xerox Fellow and has completed significant work as an undergraduate researcher. Muhammad will be completing a Take-5 next year titled “Multimedia Journalism in Developing Country Dynamics.”

Tasneem is deeply involved in research and has spent this past semester completing a Master’s level independent study.

Anna has made significant contributions to research as an undergraduate, while also balancing her time as a varsity athlete. Anna will be continuing at the University of Rochester as a Master’s student in the Center for Medical Technology and Innovation.

Jake was nominated for his impressive academic record and advanced abilities in Optics. Jake will be pursuing his Master’s in Optical Engineering at the University of Rochester.

Ben is a talented student who has exhibited a profound understanding of programming. After graduation, Ben will be continuing on at the University of Rochester to pursue his Master’s in Electrical Engineering.

Tianyu has shown true mastery of his coursework and has also dedicated himself to research as an undergraduate.

This award recognizes a hard working undergraduate with an interest in metallurgy.

As only a sophomore, Alec has impressed his professors with his high interest in materials and metallurgy. He has also undertaken independent projects which have exhibited his hardworking spirit and self-driven attitude.

This prize is awarded to the student who has demonstrated an above average interest in engineering, and who has conducted research, given a presentation or published a paper.

James was nominated for his outstanding desire to learn and his commitment to mastering the fundamentals of chemical engineering. After graduation he will begin his PhD in Chemical Engineering at North Carolina State.

Seth was nominated for his overwhelming passion for engineering, which he applies in and out of the classroom. He plans to begin working for IPG Photonics as a Mechanical Engineer after graduation.

This prize was established in 1984 and is given to a senior engineering student for demonstrated competence in both engineering and the humanities.

Andrew is an outstanding, well-rounded student. He has completed a minor in Italian along with his engineering courses. Andrew is also a recipient of the Charles L. Newton Prize.

Yiting has pursued her passions in technology and music by minoring in math and music alongside her major in AME. Yiting will be pursuing her Master’s degree in Music Technology at Georgia Institute of Technology next year.

Oliver is a top student. He is pursuing a dual degree with the Eastman School of Music and plans to continue his training in percussion performance in graduate school.

This prize was established in 1959 by a gift from the Tau Beta Pi Association Alumnus Chapter. This prize is awarded to a senior who, through academic achievement, proven leadership and character has excelled and inspired fellow students.

Chantelle has stood out amongst her peers as a leader and a role model. She is also a recipient of the Charles L. Newton Prize.

Beatriz pursued the challenge of “Restoring and Improving Urban Infrastructure”. After graduation, she will be moving to San Francisco to work at Deloitte as a Business Analyst in Strategy and Operations.

Emma tackled the grand challenge of “Providing Access to Clean Water.” She will be going on to complete her PhD in Biomedical Engineering at the University of Utah after graduation.

Syed pursued the challenge of “Providing Access to Clean Water.” He has been accepted to the TEAM program to continue his studies in engineering.

Nicole’s grand challenge was to “Enhance Virtual Reality.” She has accepted a Fulbright English Teaching Assistantship in Galicia, Spain for next year. She plans to return for a graduate degree in Optics.

Haley pursued the challenge of “Providing Access to Clean Water,” and she will be attending UC Berkley as a PhD student in Mechanical Engineering.

Michael’s grand challenge was to “Advance Health Informatics.” After graduation he intends to pursue medical school.

Jing Tian tackled the grand challenge of “Advancing Personal Learning.” She is interested in studying music education or arts administration after graduation.