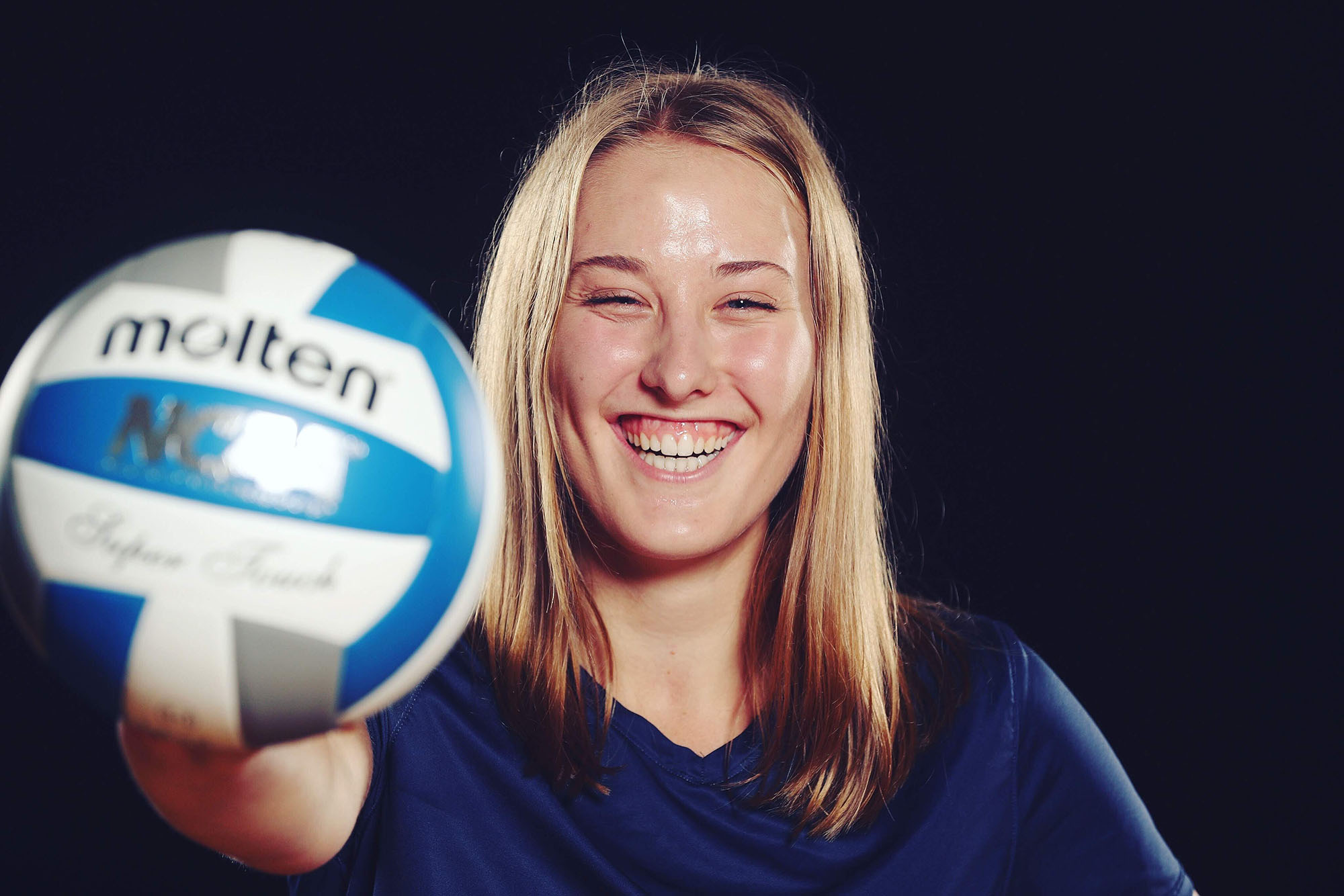 In the middle of her senior year, Kate Korslund ’20, a mechanical engineering major, had knee surgery due to a volleyball injury and was on crutches for 6 weeks.

“Every mechanical engineering professor that I would see around campus, even ones I hadn’t had a class with since sophomore year, would ask me how I was doing. This made me feel so supported while going through a tough recovery,” she says.

That’s an example of why Korslund says she “would not want to change a thing about my time at the University of Rochester.

“My main wish for college was a good engineering program where I could play Division 3 volleyball,” says Korslund, who is from Edina, Minnesota.

Her University of Rochester teammates, classmates, and professors, she says, created a supportive environment in which to fulfill that wish.

And she has taken full advantage.

A consistent Dean’s List student, Korslund has excelled in mechanical engineering. She received the Emil J. Kuichling Award, given to the junior who demonstrates the greatest proficiency in mechanics. She’s been a teaching assistant for three years. She is completing a minor in French. She was elected to Tau Beta Pi, the engineering honors society, and served as its president.

She has broadened and applied what she has learned in the classroom with three additional experiences the Hajim School encourages its students to pursue: internships, hands-on research, and global experience.

She spent two summers as an intern, first at POWER Engineers in 2017, then at SpaceX last summer. In between she gained both research and global experience as a participant in the Digital Heritage of West African Monuments Field School during the summer of 2018, performing structural analyses of masonry vaults at historic forts along the coast of Ghana. (Read her blog entry here.) Her oral presentation on this research at an Undergraduate Research Expo with Marcos dos Santos ’20, also a Ghana field school participant, won a Dean's Award.

Her experiences as an undergraduate have taught her important lessons, she says.

For example, “as a student-athlete majoring in engineering, I had to learn how to manage my time efficiently within the first few weeks of my first year,” Korslund says. “Playing varsity volleyball taught me leadership skills and accountability that make me a better engineer and member of a team.”

Her mechanical engineering classes, especially starting with the Fluids Lab class she took as a junior, right through senior design this year, have involved her in projects that will serve her well when she begins a job as an Integration and Test engineer with SpaceX in Los Angeles after she graduates this spring.

“We do a lot of hands on problems that involve the machine shop, wind tunnel, 3D printing, finite element analysis, and other skills,” she explains. “For example, the air engine that every senior built during the fall semester gave me experience in the shop that led me to learn so much about manufacturing. This experience also showed me my interests in manufacturing, which will be useful in my new role at SpaceX after graduation.”

Her experiences have taught her how to work as part of team, helped her understand how people approach problems differently, and helped her appreciate “how important it is to have engineers with diverse backgrounds.”

Help from classmates and professors

She has been buoyed by numerous of instances of support and a strong sense of community at the University.

The FIRST Robotics Scholarship she received as an incoming student, for example, was important because, “as a woman in engineering, it can sometimes feel like the odds are stacked against you,” Korslund says. “A scholarship that is centered on your contributions or potential in engineering is the greatest gift you can give a woman or minority student because it shows that they belong in engineering and that engineering needs their perspective.”

A “collaborative community of students” in the Department of Mechanical Engineering welcomed her into their midst, helped each other with assignments -- and even turned out to root for her at her volleyball games.

“The mechanical engineering department is unique in that we have several events through the year for students and professors to connect,” Korslund says. “My favorite one is the annual spring roast when seniors make fun of our professors. The professors treat it with such good humor, and we also give them a chance to roast the students back.”

Several of those professors – especially current chair Renato Perucchio, former chair John Lambropoulos, and Chris Muir – took time to talk with Korslund about the pros and cons of going to graduate school versus going into industry. Muir also helped her prepare for her internship and job interviews, then decide between job offers.

“Having professors so invested in my learning and future was incredible because I felt comfortable trying and failing at new problems,” she says. And it motivated her to work that much harder while at a college, in order to be successful afterwards.

Above all, she drew inspiration from being on the volleyball team, which she says was “definitely the most influential part of my Rochester experience. We have a very diverse set of majors on the team and what I loved is that we all do homework together which keeps us motivated to succeed in school.”

“I will forever consider myself a volleyball player,” she says.

So, when’s she’s not working as an engineer at SpaceX, you’ll know where to find her: Hitting spikes and aces on the beach volleyball courts of Los Angeles. 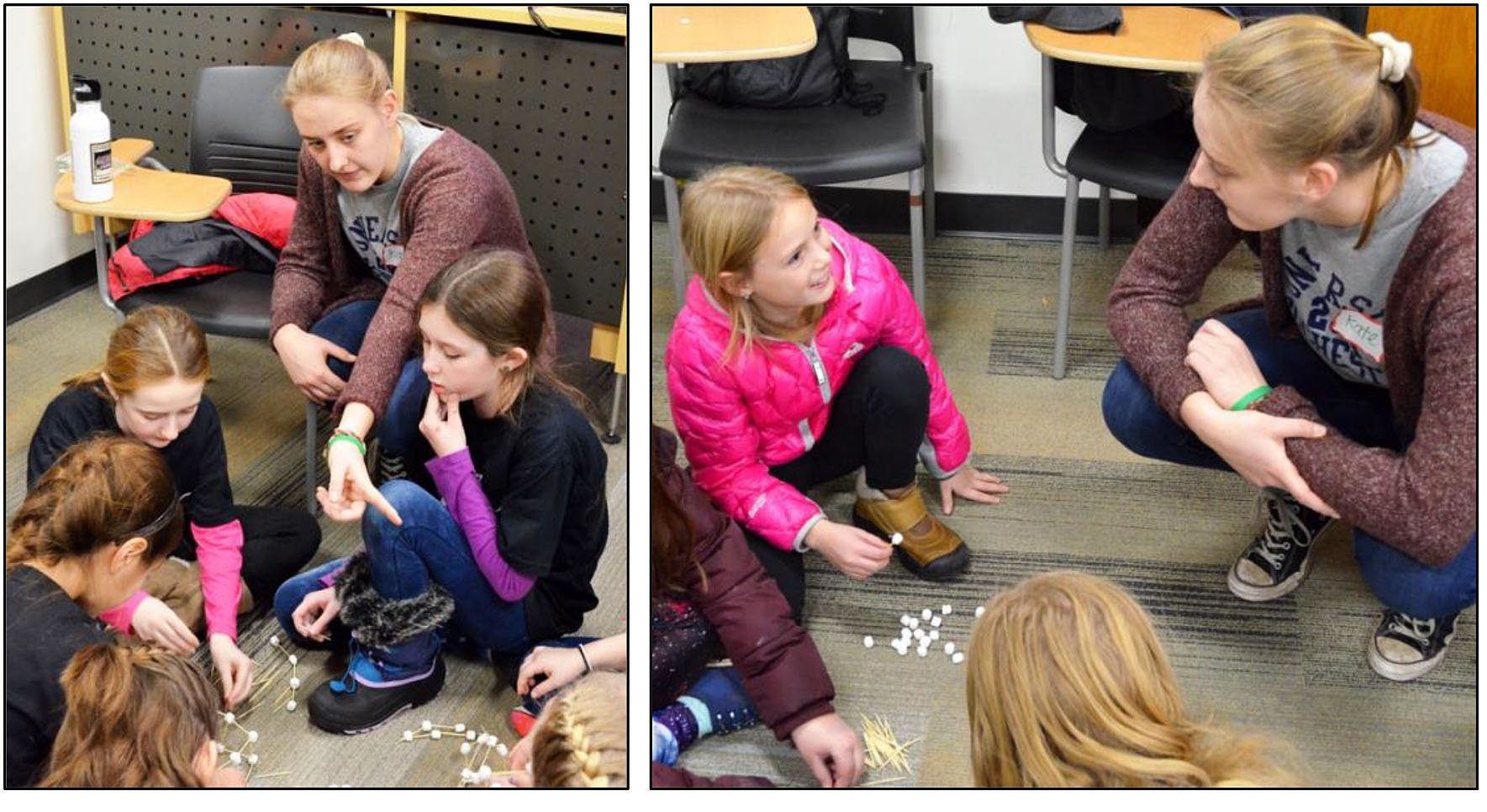 Kate Korslund ’20, a member of the Society of Women Engineers, listens as Evy Rafferty, a Girl Scout with Troop 60926, explains how she’s building a Hollywood “movie set” with marshmallows and toothpicks at a biannual Girls Day hosted by SWE in 2018. The event introduces the girls to basic science and engineering concepts through fun, hands-on projects.