Over the last 16 years, Chen Ding, professor of computer science, has offered research internships to at least 48 undergraduates. He welcomed eight of them into his research group last summer alone. 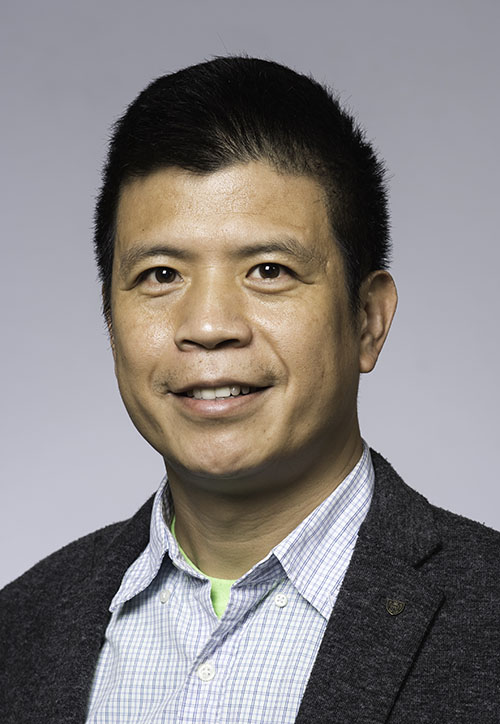 For Ding, this involves much more than simply welcoming the students into his group, and then assigning them to graduate students for their day to day mentoring.

Ding takes a keen interest in what his interns are doing, visiting with them daily, getting to know them individually, answering questions, hosting team-building activities like rock climbing, and above all treating the interns as equal partners in the group’s research endeavors.

It is often a transformative experience. And that is one of the reasons why Ding is this year’s recipient of the College Award for Undergraduate Teaching and Research Mentorship.

Wesley Smith, for example, was an undergraduate at the University of Edinburgh when he came to Rochester for a summer REU (research experience for undergraduates) internship in Ding’s group. “From day one he treated me with respect and as a peer,” he says. “Thanks to Chen’s guidance and mentorship, I was inspired to pivot completely my area of academic interest and pursue a PhD (in Ding’s group).”

Michael Scott, the Arthur Gould Yates Professor of Engineering and a colleague in the Department of Computer Science, says “I never cease to be impressed with Chen’s ability to connect with undergraduates – to motivate and inspire them, to make them feel capable and confident.

“This is a fabulous service not only to the students he mentors, but to the department’s external reputation as well.”

Ding says he is " incredibly honored and humbled to receive this award. We have such well-educated, motivated students. Working with them is a joy and rare privilege at a venerable institution like this one."

Ding’s research involves measuring, analyzing, and modeling the behavior of complex computer programs. A major focus is his groundbreaking work in understanding how programs reuse data over time.  By understanding this reuse, operating systems and computer hardware can make a program run faster by caching heavily used data nearer to the processor.  By optimizing the reuse, a programmer or compiler can make a program run faster on a given system.

One of the reasons Ding is able to support so many undergraduate researchers is his success in obtaining funding for this research from federal agencies and companies. His National Science Foundation grants, for example, allow him to request supplemental REU funding each summer to sponsor student researchers.

“For international students, who are not generally eligible for NSF REU’s, Chen has sought out University and industrial funding in an effort to not turn anyone away,” Scott says.

Ding says it’s important for undergraduates to have research experience, because it gives them insights and skills they don’t gain in a classroom. “In the courses we teach them, we know the problem, we know the answer. We are training the students how to solve the problem with the solution that we teach them,” Ding says. “However, when doing research in the lab, we don’t know the answer and often not even how to phrase the question.  So, it’s a very good experience for them.”

That said, Ding also gets high marks for his classroom teaching. Two of the courses he created – in compiler technology and software engineering – have become key electives for the department’s undergraduates. He has also taught undergraduate research honors, parallel and distributed systems, computer organization, and programming languages.

“It is difficult to imagine a more deserving recipient of the College Award for Undergraduate Teaching and Research Mentorship.”