Ready to ‘innovate, create, and change the world’ 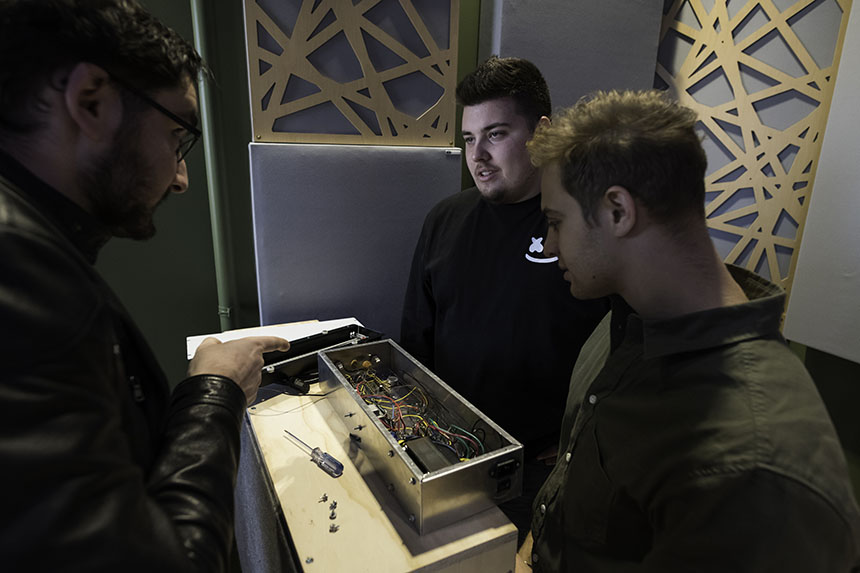 Gregory Hernandez ’20 found the University of Rochester quite by accident.

“I was researching (online) for music technology programs at the Rochester Institute of Technology. I typed in Rochester instead of RIT for music tech and stumbled upon the Audio and Music Engineering homepage,” Hernandez says, “and I am so grateful for that.”

He is not the only one.

“Greg is one of the most engaged students I’ve ever had, and he really wants to learn the material,” says Mark Bocko, chair and Distinguished Professor of Electrical and Computer Engineering.  “He loves to make things and test them in the lab. He has all the skills and motivation that will take him very far in his career, and I look forward to seeing where his career takes him. I’m sure it will be very far!”

The next step along that career path for Hernandez will be pursuing a masters in acoustical engineering from the University of Southampton in the United Kingdom on a Fulbright Award. Then he will attend Duke University to earn his PhD in electrical and computer engineering with a concentration in acoustic metamaterials, with support of a prestigious National Science Foundation Graduate Research Fellowship.

And after that? Perhaps Hernandez will work as an acoustic engineer, designing and building speakers and sound systems.

“Music changed my life. Respectfully, I am going to innovate, create, and change the world as it has done for me,” Hernandez says.

Hernandez is a hands-on learner. As a teen growing up in Catskill, NY, for example, he worked with his father’s business, repairing vehicles and building houses.

In high school, he participated in sports and in a concert and jazz band. A National Honor Society student, Hernandez focused on math and science classes, and “enrolled in all engineering courses offered by the high school.” While taking music theory his senior year, Hernandez realized how significant mathematics was in music composition. This, combined with his curiosity for electronic music, sparked his interest in music technology.

During that time he built his first loudspeaker and also became engaged in acoustics.

He enrolled at Syracuse University, originally intending to pursue a degree in civil engineering. Hernandez quickly changed his discipline and decided to pursue a degree in electrical engineering with the hopes of obtaining a second major in sound recording technology. However, after a difficult first year, he learned that he might have to stay an extra year to complete both majors. He had built “another more advanced loudspeaker out of my own curiosity,” he says, “I knew then that I wanted to change my degree and aim more towards audio engineering, physics, and sound.”

After stumbling upon the audio and music engineering program at Rochester, he applied within a week, and transferred in time for his sophomore year.

“I absolutely love it,” Hernandez says. “It is not like any other engineering program I looked at. It is very heavily project based. It’s interdisciplinary, combining a lot of mechanical engineering, physics, and electrical engineering with musical performance and recording. You can become a producer, a recording engineer, an acoustic engineer, a physicist – anything focused on sound.”

“Truthfully, it has changed the whole path of what I wanted to do,” Hernandez says.

A ‘most capable, motivated student’

The Tau Beta Pi student has taken advantage of multiple opportunities to immerse himself in his newfound passion.

For example, the summer after his sophomore year, he began working in Bocko’s lab as a Xerox Engineering Research Fellow, learning how to design new flat panel loudspeaker technologies. He worked closely with Mike Heilemann, a former graduate student of Bocko’s (now an assistant professor in the department) using a laser vibrometer to image the way the speaker panel ripples as sound moves through it.

“This is not the old procedure of just sticking a driver on a picture and saying it's worth three grand.” Hernandez explains at his LinkedIN profile.  “No, here at the University of Rochester I help explore the acoustic properties of the flat panels including frequency patterns, modal shapes, and sound radiation. I construct and develop new methods on top of current research already completed in hopes of discovering a flat panel loudspeaker analogous to conventional loudspeakers in the market today.”

Hernandez is “one of the most capable and motivated students I have ever worked with in the lab,” Bocko says. “We would discuss an idea and he would disappear to the shop and in no-time he was back with a prototype.”

Hernandez has served as a teaching assistant (TA) for five different audio and music engineering classes during the last two school years, including an introductory course for first year students, courses on sound design, the physics of sound and electroacoustics, and creating music for film and videogames.

Along the way, he’s also found time to play trombone with the River Campus Jazz Ensemble and participate in club rugby.

‘This is really, really sweet’

Last fall, Bryan Price leaned forward, turning the knobs on a spring reverb pedal with one hand, while strumming his Telecaster guitar with the other.

The sounds that emerged from the amplifiers in the new recording studio at Gavett Hall had an almost ethereal quality.

“You have a wide sweeping range of reverb, which is extremely cool,” Price told Hernandez, who designed and built the spring reverb for AME 295 – an audio electronics portfolio class. The two dozen students in the class used skills acquired from three previous analogue design classes to custom design their own guitar pedals, then personally assembled and packaged the electronic circuitry.

The challenge: Create guitar pedals that are not only technically correct, but aesthetically appealing to guitarists who use the pedals to coax different sounds, textures and special effects from their instruments.

“Not for nothing, you put this in a nice little tweet box, then it becomes not just cool, it becomes sexy,” Price told Hernandez, drawing appreciative laughter from his classmates. “This is really, really sweet. Well done.”

Hernandez describes himself as always questioning and pushing the boundaries of current technologies and theories.

If that spring reverb is any indication, Hernandez is preparing himself well to “change the world with new inventions.” 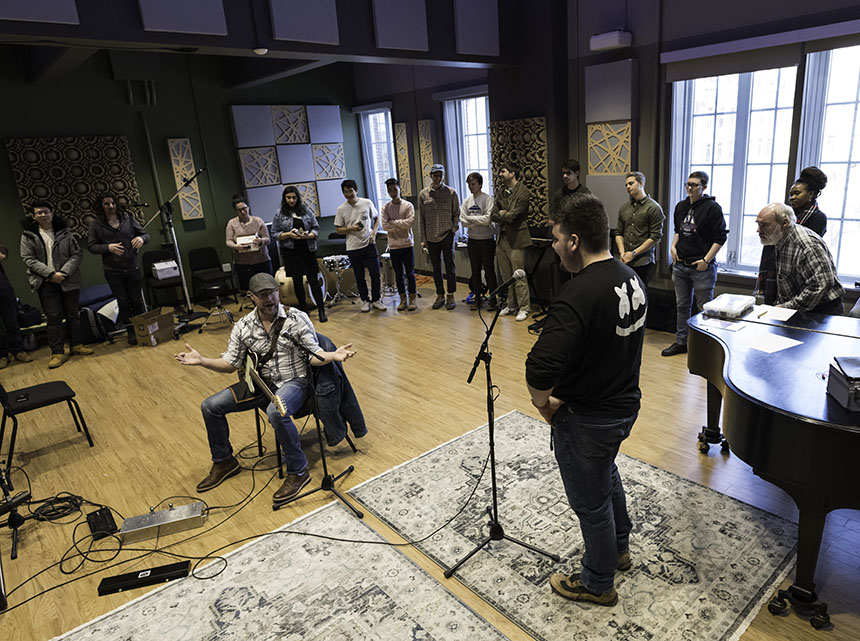 Price offers feedback on the spring reverb Hernandez created. The session was held in the new recording studio in Gavett Hall. “I absolutely love it,” Hernandez says of the audio and music engineering program at the University of Rochester.