MD-PhD grad has a ‘rare combination of attributes’ 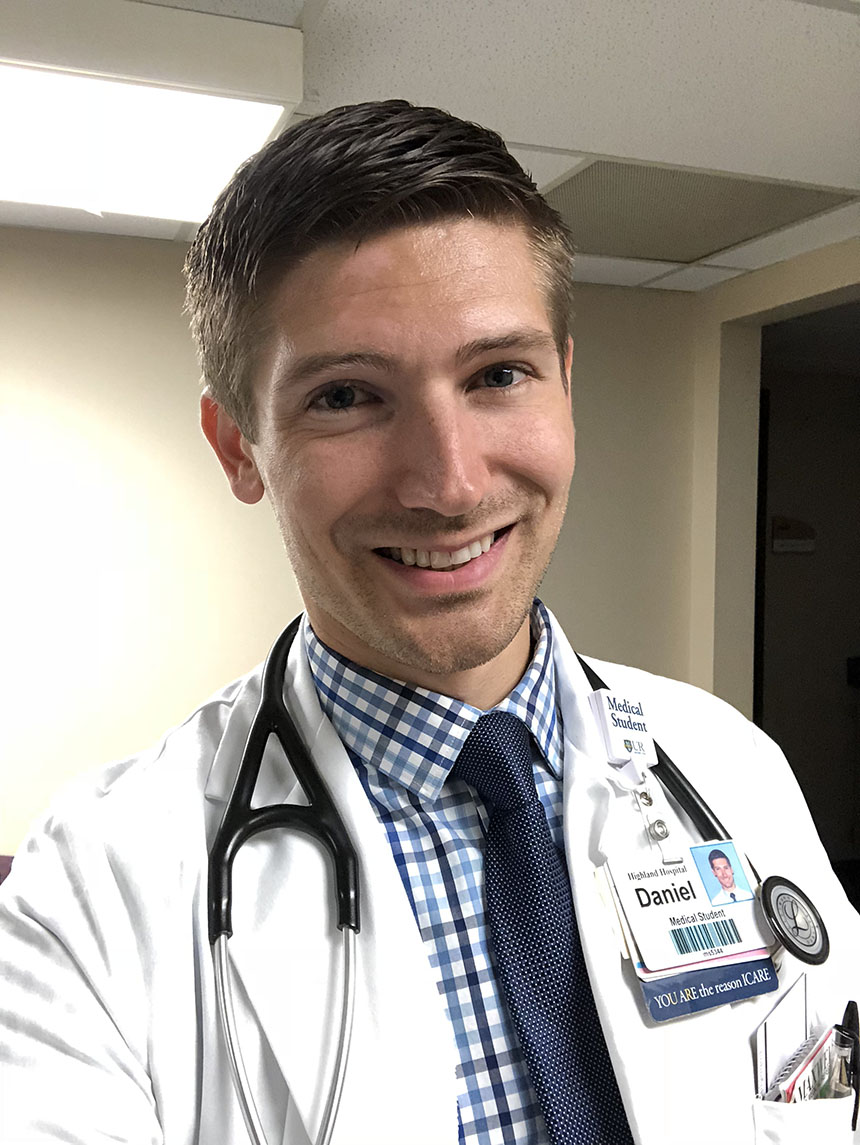 "I solemnly pledge myself to consecrate my life to the service of humanity."

Daniel Savage repeated those words on April 8, standing in front of a computer screen in his parents’ home in Webster, NY. The virtual ceremony wasn’t exactly how Savage and his fellow medical students had envisaged celebrating their graduation.

But, then, who could have anticipated they would be graduating in the midst of a global pandemic?

“The medical school graduation is such a special thing,” Savage says. “I’ve been to graduation ceremonies for friends in previous years, and it’s really a wonderful celebration. I would be lying to say there wasn't a tinge of disappointment that we didn’t get to have that full experience, but given the circumstances, this was absolutely the right thing to do. It was still very meaningful and a wonderful celebration.”

Certainly, the opening words of the oath he took that day will resonate with anyone who knows Daniel Savage. From the very beginning of his 10-year journey to complete his dual-degree program, Savage has been motivated by one goal, to find better ways to improve vision, especially in underprivileged populations.

He has been unflagging in expressing his appreciation for the unique opportunities the University has provided for him to earn those degrees. “I’ve been privileged to have had many amazing opportunities in life, but the best ones have always been at the University of Rochester,” he notes. He is particularly grateful for the many superb mentors he was worked with, and eager to become a mentor himself. Above all, he regards his education as a privilege that in turn entails an obligation to serve others.

“As a person, Daniel demonstrates a level of maturity in his interactions with people from all walks of life, that belie his age. From an academic point of view, he is simply brilliant,” says Krystel Huxlin, the James V. Aquavella, MD, Professor of Ophthalmology, who served as one Savage’s PhD advisors.

“Equally impressive is his easy, warm nature, his humility, his ceaseless quest for self-improvement and his generosity towards his peers. This rare combination of attributes will make him a natural leader in his field. I feel privileged to have known and worked with him. I simply cannot express enough how impressive Daniel is.”

"Dan has blazed a remarkable trail."

A desire to serve others

Savage, who was home schooled, says his Christian faith helped foster his desire to serve others. “I believe that every person has intrinsic God-given value that demands they be treated with the utmost dignity and respect,” he says. “Also, I was taught to always work to better the lives of those in my community, and in my own experience, joy is most often found by helping others.”

From an early age, he watched his older brother endure the childhood teasing and other disadvantages that come with wearing glasses. So, Savage says, he decided that he would focus his service on finding better ways to improve vision.

As it turned out, the best possible place to pursue that dream was just a few miles from his home, at the University of Rochester.

“We have the Institute of Optics, one of the best schools for optics in the world. We have the Center for Visual Science, with some of the most prolific vision scientists, and we have the Flaum Eye Institute – all increasingly intertwined in collaborative research,” Savage says. “That’s a combination of vision science expertise, optical science expertise, and clinical ophthalmology expertise that you can’t find anywhere else.”

After transferring to the University from Monroe Community College, he quickly became involved in research at the Institute of Optics. James Zavislan, an associate professor of optics, helped him obtain a summer internship at Optimax Systems, a manufacturer of precision optics in Ontario, NY. He continued interning there throughout his undergraduate education.

In 2010, he began his graduate studies in Knox's lab. Savage quickly expressed an interest in a project Knox and Huxlin were collaborating on: the application of femtosecond refractive index shaping to vision correction.

“Wayne introduced Daniel to me as ‘that student who graduated with a 4.0 average from his undergraduate degree in Optics – basically a genius.’” Huxlin says. “Daniel did not disappoint; his grasp of theoretical and applied optics became simply masterful.”

Savage’s PhD thesis provided important insights into the application of femtosecond laser beams to noninvasively “write” vision corrections directly into the human cornea, without any flap-cutting or other surgery.

The technology is now licensed to Clerio Vision Inc., which is also exploring ways to apply the technique to contact lenses and intraocular lenses.

“It sounds magical, but if this works out you could literally sit in a chair, look at a fixation point for a few minutes while we shine a special type of laser light into your eyes, and walk away with perfect vision,” Savage says.

This could have enormous impact, not only in this country, but also in less developed nations where access to surgical care is limited. “Giving people in underdeveloped countries glasses is a phenomenal thing to do, but they may lose them, or people may step on them, or consider them strange enough to avoid,” Savage says. “But with this technology, it might be possible to take a machine over to these countries and correct peoples’ vision very simply. It has the potential to be a very elegant solution.”

Savage’s interest in not only developing new vision technologies, but applying them as a clinician sparked his interest in earning a medical degree as well.

“He had completed about three years of excellent research when he walked into my office one day and said, 'I want to go medical School,’” Knox recalls. “I was stunned to think that such an excellent student would want to quit the Optics PhD program. But then he said 'no -- I want to do the PhD in Optics too, through our MD-PhD program.'”

When Knox replied that, to the best of his knowledge, nobody had ever done that in the history of the University, Savage replied: “ ‘right - but let's figure out a way to do it,’“ Knox says.

Knox, Huxlin, and Holly Hindman, associate professor of ophthalmology, met with officials at the UR Medical School and designed a plan of study to allow Daniel to become the first-ever student to complete an Optics MD PhD combination at the University of Rochester, through its Medical Scientist Training Program.

“We were absolutely delighted when we received Dan’s application to the Medical Scientist Training Program,” says Kerry O’Bannion, professor of neuroscience and director of the MSTP program.  “His outstanding experience in Optics research, combined with a passionate commitment to helping patients by working on challenging and cutting-edge research questions is exactly what we seek in future physician-scientists.”

Through the meatgrinder, out of the desert

“I always tell people, getting an MD is kind of like being put through a meat grinder,” Savage says with a laugh.  “It’s painful, but after four years you’re done.”

Getting a PhD, on the other hand, “is a little bit like getting dropped in the desert. You have to find your way out. And it requires a lot of self-motivation. It has to be something you’re very passionate about,” he says.

“A number of people have referred students to me who are interested in pursuing MD-PhD programs, and I always tell them, ’if you’re going to do a 10-year MD-PhD track you need to have really good reasons.’”

And for Savage, there were very good reasons.

“One of the things I’ve heard over and over again from ophthalmologists is that they always wish they had more optics and physics training, because ophthalmology is all about vision and light, which are intrinsically tied to physics and mathematics.  Having a PhD in optical physics and specializing in ophthalmology is a very advantageous combination,” Savage says.

Ultimately, after completing his residency here and his fellowship – mostly likely elsewhere – Savage would like to return to the University as an ophthalmology clinician and researcher. Two of his mentors, Rachel Wozniak, an MD/PhD physician-scientist and assistant professor of ophthalmology and Scott MacRae, a professor of ophthalmology, have been influential role models. “They are both able to balance their clinical duties and also contribute a lot of really fantastic research,” Savage says. “They are both huge inspirations to me. Following in their footsteps would be my ideal career.”

Ready to ‘step up to the plate’

One of his last rotations as a medical student was in Emergency Medicine, Savage says.

That was just before the first confirmed case of coronavirus in Monroe County. But he and his colleagues were already taking precautions.

“If someone called us and said, ‘hey I think I have these symptoms of the coronavirus’ but they didn’t warrant emergency room care, we would tell them to stay home, because the last place you want someone who is infectious to come to is the place where everybody else is.

“And if they needed to come, there were cases where they were evaluated in the parking lot.”

When the Medical School queried its latest graduates about their willingness to work in local hospitals during the impending peak of COVID-19 incidence, Savage didn't hesitate.

Better him, he reasons, than the retired physicians, nurses and health care workers who have also volunteered.

“Those people are real heroes, and those are the ones I worry about. The current data suggests they are in the higher risk categories. I’d much rather step up to the plate, and hopefully fill the need in place of someone who likely has a much higher risk from COVID-19.” 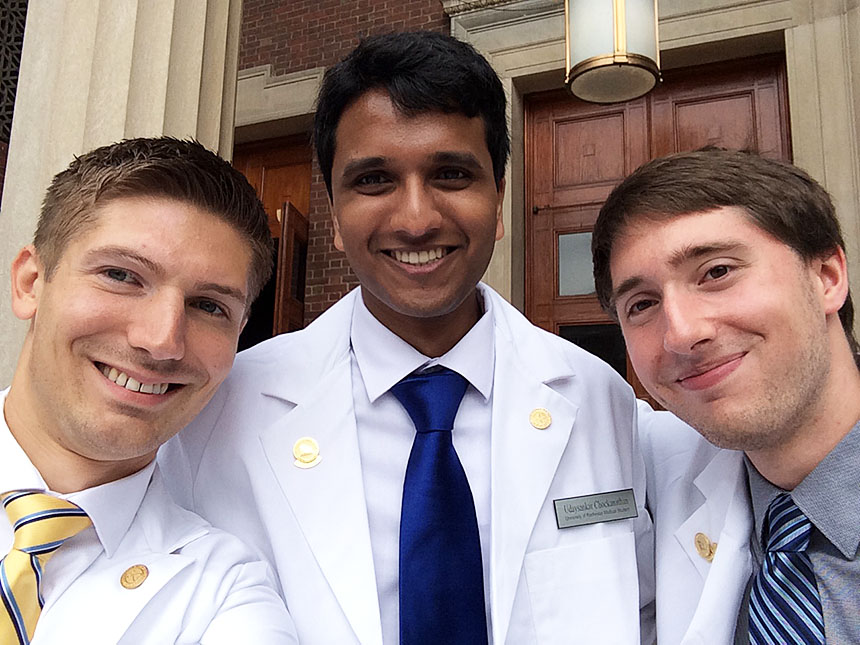 Daniel Savage with fellow medical students Udaysankar Chockanathan (middle) and Matthew Tanner. Savage says his favorite of memories of his 10-year pursuit of dual MD and PhD degrees are of the people he’s worked with—for example, his PhD advisors Wayne Knox and Krystel Huxlin and their lab staffs, and fellow PhD students and medical students. “There are just so many wonderful people at Rochester who have mentored me and invested in me. No career trajectory like this is a one man show.”