An array of solar panels activated this year at the University of Rochester will not only provide renewable energy on sunny days, but serve as an open, public demonstration of how that energy can be stored for cloudy days as well.

“We want to make available the data on how much energy the solar array is producing and how the battery is storing it, so members of the public can improve their understanding of what grid-scale energy storage of solar production looks like,” says Douglas Kelley, associate professor of mechanical engineering and principal investigator of the $1 million project.

A public website monitors “real time” energy production by the array. It will also let researchers “use the data to think about how to build next generation solar energy storage,” Kelley says. Students will also be able to integrate the data into class projects.

The 335-kilowatt integrated solar and energy storage system –about one-third the area of a football field -- is atop the Goergen Athletic Center at a university where energy efficiency and sustainability are pursued in research labs, classrooms, and student and campus life.

“This project helps advance our mission as an educational institution, for students at the University and in the greater Rochester community, while simultaneously helping to reduce our carbon footprint,” says Karen Berger, associate professor of earth and environmental sciences and coordinator of sustainability studies.  “I hope it will be the first of many projects on campus to provide these dual benefits.”

Why energy storage is important

The array was built with a grant from the New York State Energy Research and Development Authority (NYSERDA) as part of the authority's REV Campus Challenges. The challenge recognizes New York Universities for their commitments to clean energy. Rochester was one of three NY universities to receive similar NYSERDA grants. (NYSERDA is also funding research by University scientists at the Rochester Data Science Consortium to use machine learning to improve modeling of grid-scale powers systems.)

The array, installed by GreenSpark Solar, consists of 960 panels, each with 72 individual solar cells. It is connected to a 444 kWh capacity Tesla battery that will save excess energy produced by the solar panels for times when there isn’t energy available from solar power.

“There are very few systems anywhere in NY state that have this much storage, and storage is really important as we look forward to electricity grids running primarily on renewables, because we can’t turn sunlight and wind on and off as needed,” Kelley says. “NYSERDA’s interest is to see a pilot project that demonstrates that storage can work.”

Taking Rochester weather into account, the system is expected to produce about 390 MWh per year, enough to pay for itself in the first nine years of an expected 20-year lifetime, Kelley says. Producing that much from solar power, as opposed to using fossil fuel power plants, will keep about 77.9 tons of CO2 out of the atmosphere per year.

“New York state has one of the cleanest grids in the nation, so reductions in CO2 could be even bigger if our system were replicated elsewhere. For example, in West Virginia, it would keep about 346 tons of CO2 per year out of the atmosphere,” Kelley says.

A topic in classrooms

Berger says the students in her Energy and Society class “always chuckle” when she talks about the solar panel project and the potential for solar power in Rochester, “because they complain that the sun never shines here. The data we're able to collect from this array will help them see for themselves that solar power can be a viable option even in Rochester.”

While upstate New York is “not the sunniest place in the United States,” Kelley notes, it is “a lot sunnier” than parts of Europe “that have gone big on solar.” Moreover, cooler temperatures lower the electrical resistivity of the solar panel materials, thereby increasing efficiency.

Two Hajim School of Engineering and Applied Sciences faculty members have also found ways to integrate the solar array into classes they teach.

Last fall, Mark Mathias, invited Lucas Spencer, senior PV designer with GreenSpark and Michael Whitmore, the University’s director of utilities and energy management, to talk to his chemical engineering course electrochemistry, batteries and fuel cells. They discussed the technical details of the array and how it fits into the University’s overall grid and energy strategy.

They also fielded several questions from the students. For example:

Even before the array was installed, Chuang Ren, professor of mechanical engineering, invited Kelley to talk to his Heat and Power Applications class about the project. He then asked students to compare the costs of generating electricity with a similar-sized solar array versus using a more traditional technology like natural gas or nuclear power.

“The students liked it because, for one thing, some of them didn’t realize that for solar power to work, you have to have battery storage,” Ren says. “Also, it gave them a very concrete example just nearby.”

Learn more about sustainability at the University of Rochester. 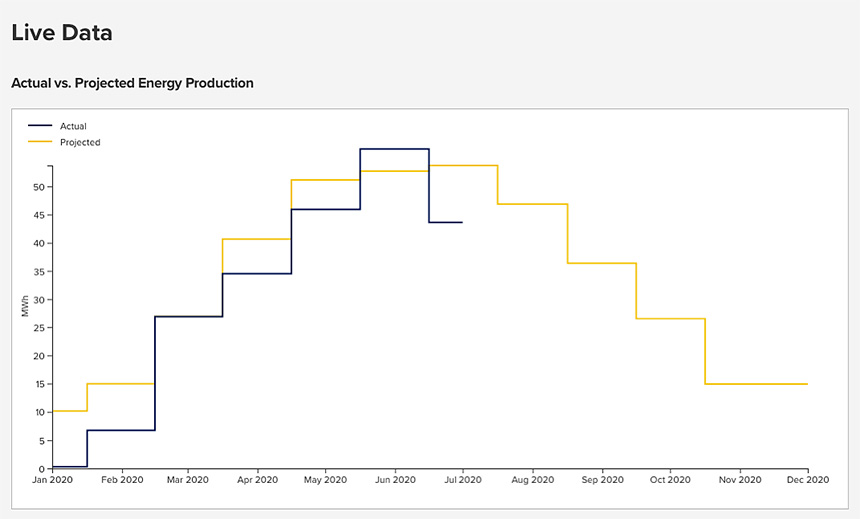