If you take a simple metal plate, attach it to a looped coil of wire, then zap the plate with a laser, something interesting happens.

The laser strips electrons off the plate, giving it a positive charge. This allows you to drive a current from the plate to the coil, creating a magnetic field inside the coil’s loop. Researchers have known about this since the 1980s. But only in recent years, with the widespread used of high-power lasers, have they begun to explore using these so-called “laser driven coils” to create magnetic fields powerful enough to magnetize high energy density plasmas – and enhance inertial confinement fusion.

One problem is that nobody has come up with a way to conclusively measure the strength of the magnetic fields in those coils during the billionths of a second that a typical experiment lasts. 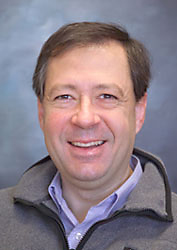 This is the issue that Riccardo Betti (shown at left), chief scientist at the Laboratory for Laser Energetics and the Robert L. McCrory Professor in the Department of Mechanical Engineering, is addressing with co-principal investigators at LLE, senior scientist Jonathan Davies and scientist Jonathan Peebles. Their $549,433 grant from the DOE’s Office of Fusion Energy Sciences is entitled "Getting to the bottom of it: do laser driven coils really work?"

Several groups have attempted to measure the magnetic fields inside laser driver coils by zapping the coil itself with a stream of protons produced by another intense laser pulse. Since protons are charged particles, they are deflected when they traverse a magnetic field. By imaging and measuring the amount of deflection, it should be possible to determine the strength of the magnetic field.

Unfortunately, Riccardo says, the laser pulse used to generate the coil current also creates an electric field – which can also deflect protons. “So, there are charged particles all over the place, and when protons get deflected, you don’t know if the deflection is caused by the magnetic field or the electric field.” In some instances, this has resulted in papers claiming magnetic fields up to 1,500 Tesla (a measure of magnetic field strength) -- with more magnetic energy than the laser energy used to produce them -- “which is obviously impossible,” Riccardo says.

In a paper published in Physics of Plasmas in June, Peebles and Davies demonstrated that a stream of protons moving along the axis of the coil will not be deflected, but instead rotates around the field.  Since the amount of rotation is proportional to the magnetic field strength, the magnetic field can be inferred by measuring the proton beam rotation.

With the grant, Riccardo and his collaborators will account for all deflections and rotations that show up in the images resulting from this axial proton probing technique. Also, they will compare images of the rotating protons derived from the laser driven coil, with images derived from a type of coil with  clearly documented magnetic fields generated by a pulsed power device. This will enable them to create a database of reference images that would occur at different strengths of magnetic fields.

“This will end the current ambiguity that arises from transversal proton probing,” Riccardo says.

Currently, researchers at LLE are able to create magnetic fields of up to 50 Tesla in a coil using pulsed power devices. Researchers interested in magnetizing laser-produced plasmas, replicating astrophysical plasmas, or enhancing the rate of fusion reactions, need even stronger fields.

“Even if we can produce 200 to 300 Teslas in laser-driven coils, that would be a big step forward,” Riccardo says. “But first we have to make sure we can accurately measure that’s what’s actually happening.”