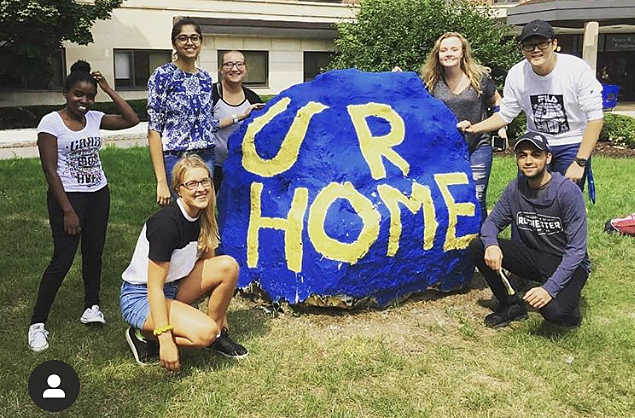 Anindini Singh '21, second from left at back, with fellow members of the D'Lions, sophomores and juniors who serve as peer advisors for first-year students--answering questions about classes and helping students with registration, decorating residence halls, and sponsoring activities to help first-year students get to know and bond with each other.

Anindini Singh ’21 came to the University of Rochester intending to major solely in economics.

But it was also in the “back of my mind,” she says, that data science might also be worth pursuing. So, when a Rochester advisor pointed out that many economics majors also major in applied mathematics, Singh decided on a different approach. She would apply her already strong background in math, acquired at the school she attended in India, to pursuing a second major in “a much more upcoming field”—data science.

“It’s definitely been one of the most challenging things I’ve done so far,” Singh says. “I didn’t have any programming experience prior to coming to college, so it was a pretty steep learning curve.”

That learning curve involved some “nerve wracking” moments in an introductory computer science course, she says. Classmates who had prior programming classes in high school were instantly grasping concepts that “took me a lot longer to understand,” Singh says. The learning curve also meant “moments when I doubted whether I would ever be good at this, whether it would ever be a field I would want to pursue.”

But Singh followed her parents’ advice and persisted. She got help from supportive classmates and from the University’s Center for Excellence in Teaching and Learning (CETL).

And now it is Singh who is helping other students as a peer advisor in data science.

Singh, who grew up in New Delhi, enjoyed taking math, physics, and chemistry courses at the private school she attended there. “But I wasn’t all that interested in computer science, and I definitely didn’t like statistics, ironically enough.”

As is often the case in the United States, Singh couldn’t help noticing that “even in my school, it was the humanities and social science sections that were dominated by women whereas the science and math sections were typically dominated by boys.”

However, her parents, both of whom work for the Indian Revenue Service, “were very persistent” in encouraging Singh to pursue math and the sciences, she says. “To them, math was something they thought would always hold me in good stead, in whatever field I chose to pursue later on.”

“Also, I knew I needed financial help in order to study in the United States, and the University of Rochester was very generous in that respect,” Singh says.

Branching out at UR

She does not regret her decision to attend the University of Rochester. “The environment at the University is very collaborative,” Singh says. “People aren’t competitive amongst themselves in an academic sense. My friends here have always been willing to help out.”

She arrived on campus “in a mood to experiment,” and quickly found the perfect opportunity.

At an activities fair during orientation, Singh met Nigel Maister, artistic director of the University’s International Theatre Program. He convinced Singh to audition for a part in an upcoming student production --“In the Matter of J. Robert Oppenheimer” –a drama based on actual transcripts from the national security hearings into the famed scientist who participated in the Manhattan atomic bomb project during World War II. Oppenheimer later strenuously opposed nuclear proliferation and development of the hydrogen bomb.

Singh performed the role of Isidor Isaac Rabi, a fellow scientist who testified at the hearing.

“I had dabbled a little bit in acting in school (in India), but nothing quite on this scale,” Singh says. “It was a great experience, and fortunately that was the one semester when I actually had enough time to devote to the theater, because it took up a lot of time in terms of rehearsal.” Not to mention performing nine shows back to back, including two a day on weekends.

That December she began serving for a year as an international student legislative aide for the Students Association, researching possible legislation to ease the integration of international students on campus and encourage their participation in student organizations and leadership opportunities. She also joined the D’Lions--sophomores and juniors who serve as peer advisors for first-year students--answering questions about classes and helping students with registration, decorating residence halls, and sponsoring activities to help first-year students get to know and bond with each other.

Even when the rigors of pursuing dual majors in economics and data science left less time for other activities, Singh participated in valuable internships each of the last three summers.

For example, this past summer she participated in a virtual internship with STEM-Away as part of team, using natural language processing to build a web-scraping model—essentially a way to retrieve relevant information from a website.

The previous summer, she worked as a data analyst at Leibniz Universitat in Hannover, Germany, working with PhD students in macroeconomics who were researching the influence of transportation routes on the emergence of different crafts and occupations across Europe, and the effects of colonialism still experienced in Africa today.

“That was very exciting for me because it helped combine both my interests in economics and in data science,” Singh says. The internship, through the DAAD-Rise program, was funded with a Research and Innovation Grant (RIG) from the University of Rochester.

‘Don’t give up at the first sign of a hurdle’

Thanks to the internships, combined with her coursework for the data science major at the Goergen Institute for Data Science, Singh is now confident in her abilities. “I think one of the most gratifying aspects of this major is you can write an algorithm, design a program, and then see the output right before your eyes,” Singh said in a recent Zoom session describing the data science major for other students.

“There’s a lot you can learn on the job,” Singh says. “I’m not looking to super specialize just yet. I want to strengthen the fundamentals first, before I zone into something more specific, or transition into something like data science,” she says.

During the Zoom session, Singh concurred a fellow data science major. Students will learn the most when they are willing to put themselves in a challenging situation, outside their comfort zones – just as Singh has done throughout her schooling, in India and at the University.

Her advice for students is the same that her parents had for Singh: “Anything worth pursuing is going to be challenging. Don’t give up at the first sign of a hurdle. You just have to rally on and put in the work.”