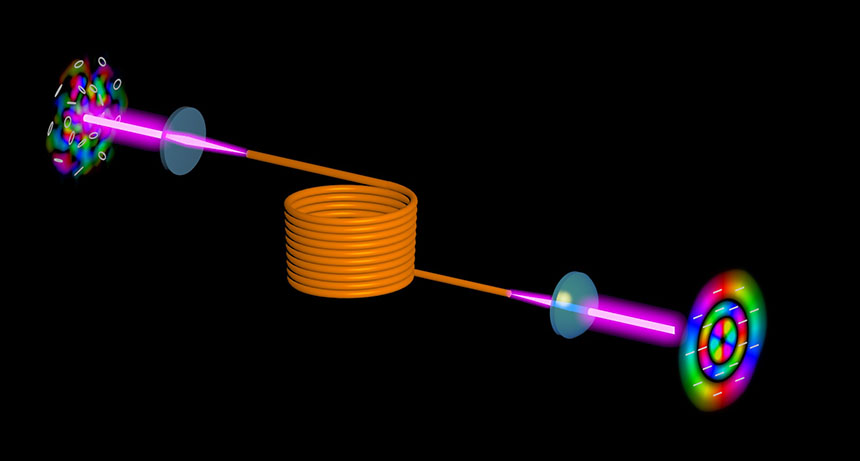 When a well-defined image propagates from the right-hand side to the left-hand side through a 1-km-long multimode fiber, its spatial profile and polarization will be strongly distorted. By flipping the wavefront of the distorted image for both polarizations simultaneously, a technique referred to as vectorial time reversal, an undistorted beam is formed after it passes from left to right through the optical fiber. (Illustration by Yiyu Zhou)

The use of multimode optical fibers to boost the information capacity of the Internet is severely hampered by distortions that occur during the transmission of images because of a phenomenon called modal crosstalk.

Lead author Yiyu Zhou, a PhD candidate in the Rochester lab of Robert Boyd, professor of optics, draws an analogy to a multilane highway in describing the challenge the researchers confronted.

“Obviously, a multiple lane highway is faster than a single lane,” Zhou says. “But if a courier is forced to change from lane A to lane B, the package will be delivered to the wrong destination. When this happens in a multimode fiber—when one spatial mode is coupled to another during the propagation through the fiber--it’s what we call modal crosstalk. And we want to suppress that.”

The solution the researchers devised involves digitally pre-shaping the wavefront and polarization of a forward-propagating signal beam to be the phase conjugate of an auxiliary, backward-propagating probe beam—in an experimental realization of vectorial time reversal.

“When an optical beam with perfect wavefronts passes through the multimode fiber, it comes out badly distorted,” explains Boyd, who is also the Canada Excellence Research Chair in Quantum Nonlinear Optics at the University of Ottawa.

“If we use a mirror to send the wavefront back, it will become even more distorted. But if we instead reflect it off a mirror, and also flip the wavefront from front to back, the distortion becomes undone as the waves go back through that distorting medium. In particular, we need to perform this procedure for both polarizations simultaneously when the distorting medium is a long multimode fiber.”

“Our technique can be used to realize mode-division multiplexing over long, standard multimode fibers to significantly enhance the channel capacity of optical communication links,” Zhou says. “It can potentially be used to increase the Internet speed by one or two orders of magnitude.”

The technique could also be potentially used to improve endoscopy imaging of the brain and other biological tissues, Zhou says.

The research was supported with funding from the U.S. Office of Naval Research; a Banting Postdoctoral Fellowship; the Natural Sciences and Engineering Research Council of Canada; the Canada Research Chairs program; the Canada First Research Excellence Fund; a Vannevar Bush Faculty Fellowship sponsored by the Basic Research Office of the Assistant Secretary of Defense for Research and Engineering; and a Qualcomm Innovation Fellowship.