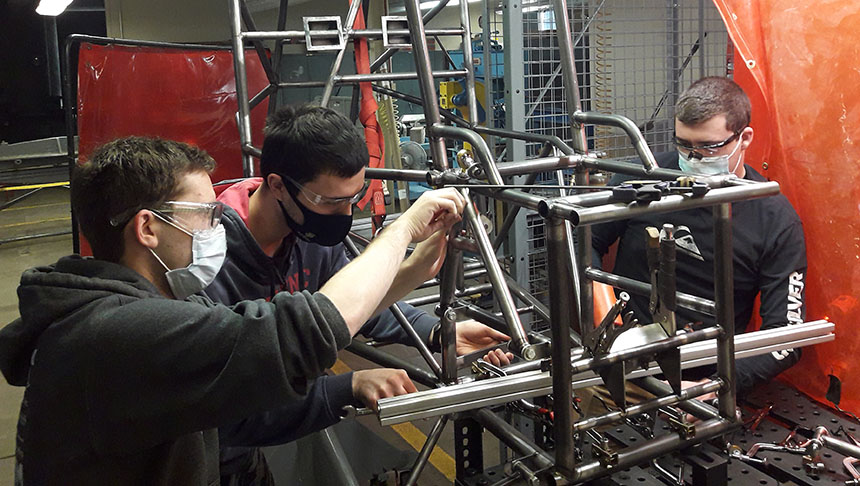 Ongjen ‘Ogi’ Bosic’s dream job is to one day design a Formula One race car.

In pursuit of that dream, the mechanical engineering major from Bosnia and Herzegovina has been unswerving in his desire to learn new things. To broaden his horizons.  To take the initiative in finding “useful” applications for what he learns in his University of Rochester classes. 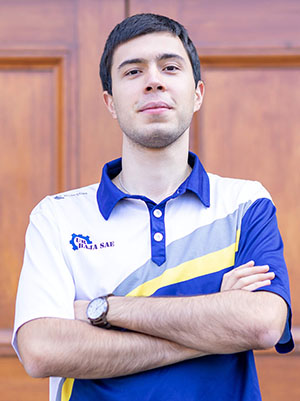 By his second semester as a freshman, for example, Bosic was selected by his fellow Baja SAE student teammates to be the frame project team lead. It was not only a major responsibility but an opportunity for Bosic to apply lessons from the classroom to a real-life challenge: building an off-road vehicle to compete against other university teams.

Just before his sophomore year began, Bosic took the initiative and emailed Assistant Professor Niaz Abdolrahim asking if he could do research with her. He has worked with her Advanced Computational Mechanics and Materials Laboratory ever since.

That same year he received the Suzanne J. O’Brien Book Award, which recognizes students who excel academically and in leadership roles in their first year at the College of Arts, Science & Engineering.

He is also the inaugural recipient of the Prof. Alfred Clark Undergraduate Scholarship in Mechanical Engineering, which recognizes worthy students based on their successful scholastic record and potential to build on multiple talents.

And most recently he received the Hajim School’s Richard Eisenberg Engineering Award, which recognizes hard-working undergraduates who have an interest in metallurgy.

In nominating Bosic for this award, Abdolrahim praised him as a “hardworking researcher with great enthusiasm and exceptional advancement” who will “continue to succeed and glow in his educational and career endeavors.”

Bosic grew up in Bosanski Samac, a small town of about 10,000 people in Bosnia and Herzegovina in southeastern Europe. During the 1990s, the country gained its independence from Yugoslavia, then experienced bitter conflict as Muslims, Croats and Serbs fought for control. His mother, a bookkeeper, and his father, an engineer, “had a really rough time” during the war, which robbed them of some of the best years of their lives, Bosic says.

“They were a big inspiration for me because they nonetheless moved forward with their lives. They always told me, ‘okay, you need to study really well’, so I could get into a good school. They always pushed me to study more, so that’s something that has really motivated me.”

He attended a year of high school in Finland as an exchange student, then returned to Bosnia and Herzegovina to earn his high school diploma from the International Baccaulaureate School in Banja Luka.

Bosic has been a “big fan” of Formula One racing since he was eight years old. “Initially it was because the cars are cool, they drive fast, and I really liked the racing part,” he says. “But as I got older, I got interested more in the technical side of actually building them.”

By his second year of high school, he knew he wanted to pursue a degree in mechanical engineering. Given the circumstances in his home country, Bosic says, his best chance of doing that was overseas.

When he learned he could attend the International Baccalaureate World School Conference at the University of Rochester in 2017, all expenses paid, “it was like, why not, let’s go!” Bosic says.

He liked what he saw at the University. At the urging of Jonathan Burdick, then dean of admissions, Bosic applied and was accepted.

A passion for research

In addition to pursuing a BS in mechanical engineering, Bosic is earning a minor in Archeology, Technology and Historical Structures, a multidisciplinary program in which students study the evolution of technological, architectural, and engineering practices and their relationship to ancient and pre-industrial cultures.

He became interested after hearing ATH program director Renato Perucchio, professor and chair of mechanical engineering, describe the program in an Engineering of Bridges course. The program appealed to Bosic in part because it gave him an opportunity to learn more about the ancient structures of Rome and Greece, in the same part of the world where he grew up.

Bosic, who can speak Serbian, English, and Finnish, and knows “the basics of Latin,” has also taken Russian and German language classes. During the summer before his sophomore year, he participated in a study abroad program in Germany to further immerse himself in the language.

He has taken full advantage of the opportunity to do research with Abdolrahim. Her lab uses computational modeling and simulation to better understand the physics of deformation in advanced materials. Her researchers also develop mathematical models to predict the mechanical or physical properties of the materials, often at nanoscale.

Most recently, Bosic has been simulating the deformation of a copper matrix when implanted with helium nanobubbles, to better understand the resulting mechanical properties, and how they could then be tuned for specific applications.

Abdolrahim says she is amazed by Bosic’s “passion for research and, more importantly, his critical thinking and independent research skills. Ongjen is truly a remarkable student—detail oriented, capable, and versatile in expertise, and a person who can think on the fly and work independently.”

‘I know I can trust him’

He has especially enjoyed the opportunity to participate in Baja SAE, the student team that designs and builds an off-road vehicle for competitions against other university teams from around the world. He is now the Drivetrain Project Team Lead and was recently elected to be chief engineer during his senior year.

He was attracted to the team because it aligns so closely with his love for Formula One racing, --but also because “It’s such a great implementation of knowledge that you learn about in class.”

He revels in the opportunity to convert the equations and theories of, say, a solid mechanics class, into “useful knowledge” to help design a better frame or drive train

“And you get involved in the entire engineering cycle. We design the parts for our cars and we also preform analysis of them to make sure they don’t fail. We manufacture them and we also test them.

“I think this is also what employers like to see.”

Chris Muir, a professor of mechanical engineering who serves as the team’s faculty advisor, describes Bosic as “an excellent student, and an integral part of the Baja team. . .  who not only has the responsibility to design and lead the manufacture of his subsystem, but also is expected to work with younger members to train them and involve them in the process. He is doing both things well . . .”

Muir worked in industry for nearly 25 years before joining the mechanical engineering faculty. “I would certainly have hired Ogi to be part of my team in a research or design/development capacity,” he says. “I know I can trust him to get something done.”

Bosic has also found time to serve as TA for Muir’s course in solid mechanics, and to serve as study group lead and peer tutor with the University’s CETL.

And when he needs a break, Bosic pursues another passion: chess. “You can play three-minute online games,” he explains. “So, I just play for three minutes and go back to my work.”

Bosic is still debating what to do after graduation. He might pursue a PhD, concentrating on finite element methods. Or he might first pursue a master’s degree.

But his “dream job”—designing a Formula One race car—is still definitely on his agenda.

And that would mean working in industry, at least at first.

Bosic says he wouldn’t mind emulating Muir, who has received a professor of the year award from students and the University’s Edward Peck Curtis Award for Excellence in Undergraduate Teaching. Students appreciate his ability to draw on his industry experience to show them the relevance of what they are learning in the classroom and their senior design projects.

“I would like to gain that kind of knowledge as well, and then maybe when I am a bit older work in academia,” Bosic says.