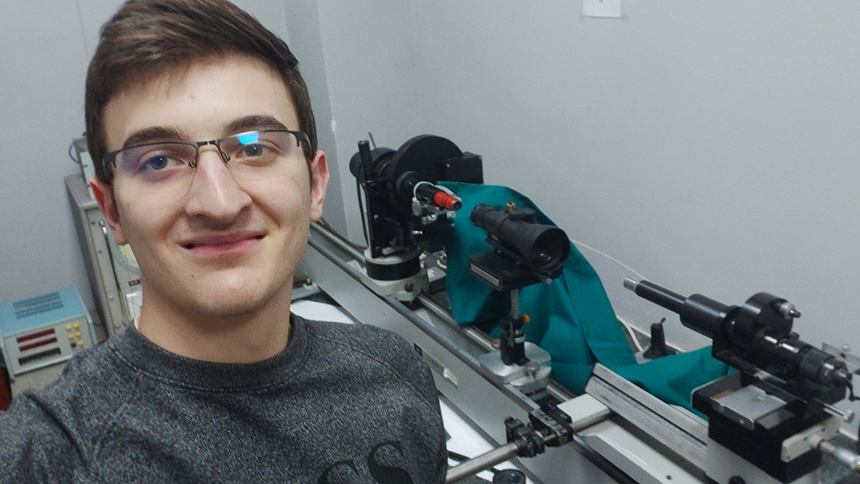 This photo was taken of Hristijan Stojkovic while he was working last semester at HARDER.digital GmbH as an optical design engineer.

It wasn’t easy being a 10-year-old growing up in an orphanage in Serbia, says Hristijan Stojkovic ’22.

“To be honest, I don’t remember much about it,” the University of Rochester optical engineering major says. “I think I blocked a lot of it out.”

But Stojkovic does remember not having any pocket money to do the things most kids that age take for granted. So, he learned how to repair portable CD players and other electrical devices--and resell them.

“Later I realized that this was my first introduction to engineering,” he says. It was also an example of how he learned at an early age to be a self-reliant entrepreneur, “to do things on my own, and then make it work. I guess that’s what helped me come to the United States.”

Stojkovic has continued to make the most of his opportunities since arriving here.

When COVID shelved his research fellowship plans last summer, Stojkovic was not deterred. He emailed 20 faculty members asking to work in their labs—and landed a position in Adam Sefkow’s research center at the Laboratory for Laser Energetics. This summer he is working remotely, through a prestigious DAAD-Rise fellowship, with a research team at the Institute of Physics at Humboldt University of Berlin studying an ultra-cold atom (Bose-Einstein Condensate) machine. He was one of 268 students chosen out of 1,635 applicants.

Stojkovic is also among the outstanding students that SPIE—the international society for optics and photonics-- recently picked to receive its 2021 Optics and Photonics Education Scholarships, based on the recipients’ potential to contribute to the field.

But it would be a mistake to assume Stojkovic arrived where he is entirely on his own. Far from it, he says. From the end of middle school onwards, supportive family members and mentors have helped guide him.

‘My time to shine’

Things began looking up for Stojkovic when an aunt and grandmother became financially able to adopt him about the time he was in middle school in Serbia. They provided him a solid footing and sense of family for the first time in his life.

Stojkovic’s first exposure to optics came in a high school physics course. An experiment using lasers and lenses to bend a ray of light left a lasting impression on him.

“Then a piece of news changed my life forever,” Stojkovic says. Thanks to a cooperative arrangement between the SOS Children’s Villages in Costa Rica and the United World College in Costa Rica (UWC), Stojkovic was one of five students—all current or former orphans—who were offered scholarships to attend UWC for his last two years of high school.

“I was confident that after 16 years of struggle, my time to shine had come,” he explains at his LinkedIn profile. “For the first time, I believed that despite being an orphan I could achieve my dream of pursuing a higher education degree and studying in the field of optics.”

He had to work hard to earn his UWC international baccalaureate degree.

“I was taking math and physics courses that were taught in English, and I didn’t even know how to speak the language; I had only a very basic level of English,” Stojkovic says. “In addition, many of the students were native Spanish speakers, so I had to learn both English and Spanish simultaneously. The good thing is that I am very talkative and love spending time with people, which helped me to adjust to new languages and the different student cultures (there were around 90 nationalities at UWC).”

UWC was also where he was introduced to optical engineering as a possible degree choice. That choice was cemented for Stojkovic during a visit to Montenegro. While sitting by a lighthouse one evening at a beach, he witnessed a laser beam pointed at a ship far offshore. “That visible green beam seemed so powerful in the dark night sky,” he recalls. “This astonishing high-intensity laser beam attracted my interest and helped me decide that optics is an engineering field worth pursuing.”

But perhaps Stojkovic’s most important takeaway from UWC was the value of mentorship.  He met Slavko Bradić, an associate director of admissions from George Washington University and a fellow Serbian, who took Stojkovic under his wing. “He really went above and beyond to help me succeed, not because he had to, but because he likes helping people. Slavko is a mentor any student would be grateful to have,” Stojkovic says. He still calls on Bradic for advice-- an important lesson in having mentors, not just for the moment, but for a lifetime.

Only Rochester belonged to the Davis United World College Scholars Program, which provided Stojkovic with enough additional scholarship support to cover all costs of attending the university. Stojkovic applied early and was accepted.

Stojkovic says he’s happy with his choice of optical engineering as a major, in part because the field offers ample opportunities for entrepreneurship.

He also appreciates the opportunities he’s had to explore the different ways his engineering skills can be applied. Last summer in Sefkow’s research lab, for example, Stojkovic was exposed to “the computer science side of electromagnetics-- basically electromagnetic modeling,” he says. “It was a very valuable experience. Professor Sefkow really helped me out and I will be grateful forever because he let me join his research group.”

This spring he took a leave of absence to work full-time as an optical design engineer at HARDER.digital GmbH, collaborating with a group of engineers on optimizing Night Vision Devices and doing physical assessments of the optics used in the devices. He was also involved in a project with engineers who were modeling a device to measure the modulation transfer function (MTF) of optical systems.

As at UWC, Stojkovic has benefited from interactions with mentors at Rochester.

His favorite course outside of optics, for example, is WRTG 273—Communicating Your Personal Identity, which he took during his sophomore year. The required course teaches engineering students how to prepare a portfolio of resumes, cover letters, elevator pitches, and online profiles to compete for internships, jobs, and graduate school. The class includes an opportunity for students to gain feedback and advice from Real Readers--University alumni working in an engineering field that interests the students.

“I’m telling you, that class was great,” Stojkovic says. “I was actually thinking of taking it again, just as a refresher.”

His Real Reader, Jay Kumler ’87 MS, president of Jenoptik Optical Systems, not only helped Stojkovic with his portfolio, but also got him thinking about different fields of optics he could pursue. Kumler also encouraged Stojkovic to think about becoming an entrepreneur in the optics field and start a business just like he did.

This past spring, the University’s Greene Career Center connected Stojkovic with Jenifer Bunis ‘86, a photonics recruiter and consultant in the field of optics, who helped him further hone his interviewing skills. She also helped him think about his long-term goals and--just as importantly--how to articulate them. “Jenifer would advise me on the best moves I can make at the time regarding my professional development offers and personal life decisions,” Stojkovic says.

A company of his own

After completing a master’s degree in optical engineering at Rochester, Stojkovic plans to work at some of the biggest optical companies in the field to gain more knowledge of what’s involved in being a leader at a company with many employees.

He would then like to begin a company of his own in Serbia. Initially--given the lack of a trained optics workforce in his native country--the company would do assembly work for US companies.

Eventually, Stojkovic would like to open the first school for optical engineers in his country, prequalifying them to work in his company, which could then design and produce its own products.

“This is my dream,” he says. “The struggles I went through made me want to start a company that can educate and help other orphans have a better life in Serbia.”

That would be quite an achievement for a young Serbian orphan who resold portable CD players for spending money, to build a company of his own.

Given Stojkovic’s achievements so far, it seems a good bet that he’ll pull it off.