Muhammed El-Sayed ’22 says he tends to “jump in headfirst before thinking.”

Such was the case when the electrical and computer engineering major at the University of Rochester decided to take a digital history class—just to fill out his schedule—taught by Michael Jarvis, a professor of history who for several years ran an archaeological field school in Bermuda for his students.

“Little did I know I would get the opportunity to make a digital educational game about the discovery of Bermuda,” El-Sayed says.

And consider the fortuitous chain of events this set in motion.

The class led to El-Sayed becoming a research assistant for Jarvis. That led El-Sayed to the Digital Scholarship Lab where he worked as a student developer.

And that in turn led to El-Sayed’s appointment as one of this year’s cohort of five Karp Library Fellows. As a Karp fellow, El-Sayed is serving as the immersive technologies developer for Studio X, a new space in the Carlson Science and Engineering Library that will foster exploration, cross-disciplinary collaboration, and peer-to-peer tutoring in the latest extended reality (XR) technologies, including virtual, augmented, and mixed realities.

El-Sayed will play a key role in helping all that exploration, collaboration and learning occur.

Emily Sherwood, director of Studio X, says that El-Sayed’s background in both computer science and history, “makes him ideal for thinking through some of the cross-disciplinary challenges of XR. He’s an excellent teacher and is constantly coming up with creative ways to get his peers excited about XR. He’s played a central role in getting the word out about Studio X.”

El-Sayed says he is grateful for the opportunity.

“Being surrounded by people making cool things with cool technology—and being able to provide support—is something I really look forward to,” he says.

Studio X, he adds, is a “perfect example of a fantastic work environment. I am given the freedom to pursue my own interests; I’m given guidance when needed; and I am surrounded by like-minded people who are all just as passionate and dedicated to our mission as I am, as we all explore these technologies and their role in our current society.” 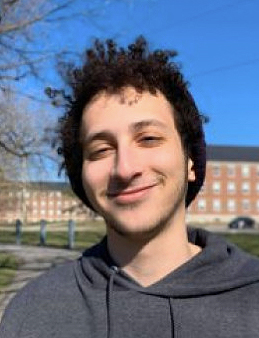 El-Sayed was born in St. Louis. Barely a year later, his family moved to Bloomington, Ill., and then, when he was 6 years old, on to Peoria, Ill. “There I spent my elementary school years, and soon after the Arab Spring of 2011, we moved back to Egypt, the home country of my parents,” Sayed says. “I stayed there until I left for college.”

As a result, El-Sayed speaks both English and Arabic fluently, as do his three siblings. His father, a mechanical engineer, completed his PhD in the US. His mother, a pediatrician, discovered a love for teaching while volunteering at one of El-Sayed’s schools and became a teacher.

He vividly recalls his 4th grade science teacher at Charter Oak Elementary School in Peoria giving him an empty hornet’s nest she had found in her house. “Looking back, she honestly might have just wanted to get rid of it, but to me it was the coolest thing in the world. I took it home and spent hours taking it apart trying to understand how the whole thing worked,” El-Sayed says.

However, his love for science and engineering was primarily fostered during four years of Botball, a global robotics competition he participated in during middle and high school in Egypt.

“At first I joined because computers are cool and my friends were joining,” El-Sayed says. “But I'll never forget the way it felt to watch the robot that I coded do –mostly—what I told it to and win us awards. That was cool.”

He began his college education at Stevens Institute of Technology in Hoboken, NJ. owever, El-Sayed says, “the campus was tiny, diversity in the student body didn't exist, and it was simply too expensive.

“I had friends who were students at the University of Rochester, and when I told them I was thinking of transferring they told me to apply. Being the ‘do first/do the thinking you should've done first later’ kind of person I am, I applied. And I couldn't be happier.”

I’ll accept whatever comes my way’

El-Sayed says his experience at the University has been positive in multiple ways. Faculty members—especially Jarvis and Jack Mottley, associate professor of electrical and computer engineering—have “been amazingly accommodating and have taken a genuine interest in me,” he says.

El-Sayed says he is especially proud of the way the University handled the onset of COVID-19 last summer. Students were given not only living accommodations, but also food and essentials. Amid all the scrambling to switch to remote learning, El-Sayed says, he appreciates those faculty members, such as Mottley, who “took extra care to ensure that students felt no unnecessary pressure.”

As a student developer in the Digital Scholars Lab and now as a Karp Library Fellow, “everyone I have worked with has shown me the same kindness.” He gives special shout-outs to Meaghan Moody, immersive technologies librarian, and Joshua Romphf, digital scholarship programmer.

After he graduates, El-Sayed says, he will primarily look for jobs that either involve using Unity (a game development engine) or some of the other technical skills he has picked up.

“I despise unhealthy, competitive environments, so I don't aspire to work for a big-name Silicon Valley company,” El-Sayed says. “Generally, I think I'll get into something like video game development or multimedia application development with a focus on XR technologies.

“Beyond that, who knows! Changing the world would be cool, but so would working at a library or becoming an educator. I'll accept whatever comes my way!