Alvin Lomibao wants to 'meet students where they are' 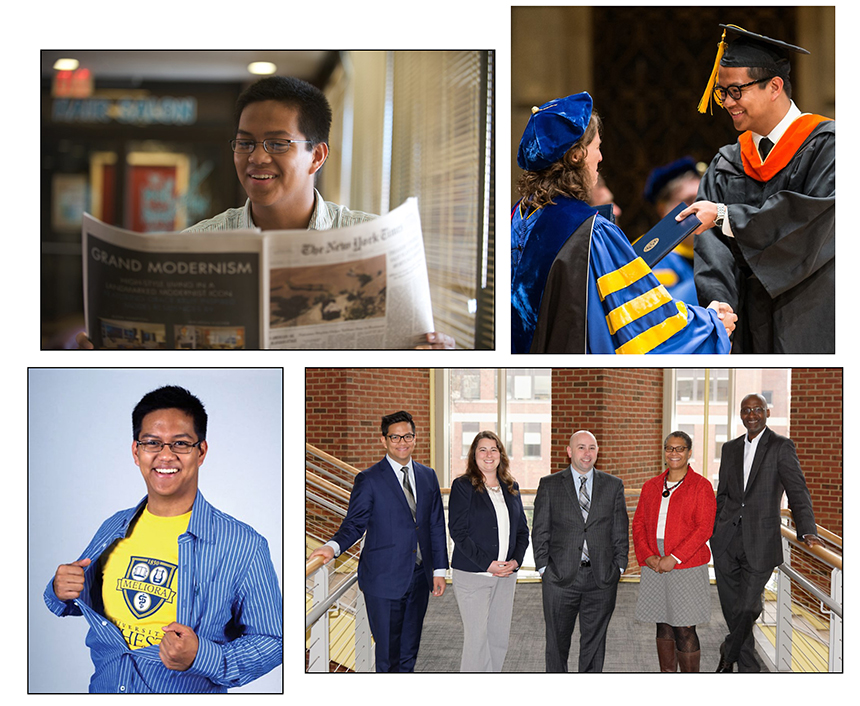 This collage reflects Alvin Lomibao’s long association with the University of Rochester, as an undergraduate, top left and lower left; receiving his master’s degree, upper right; and after receiving the University’s Meliora Award in 2016, lower right, with other members of the Hajim School advising team, including former assistant dean Lisa Norwood, second from right.

Alvin Lomibao ’09 ’13 MS, the Hajim School’s new assistant dean for undergraduate studies, says he is fortunate to be “picking up the baton” from such an able predecessor.

Lisa Norwood, who held the position for more than 26 years, left the office “in such a healthy state,” Lomibao says. As a result, he can concentrate on building upon her legacy, which included creating new pathways for women, underrepresented, low-income, and first-generation students to excel in engineering.

Lomibao played an important role in helping Norwood shape that legacy during his six years as the Hajim School’s assistant director of undergraduate studies, after previously working as a project manager and student organization advisor with Wilson Commons Student Activities.

Those experiences, combined with “his thoughtfulness, his analytic eye, and his sincere desire to help both students and colleagues” helped Lomibao stand out during a nationwide search that produced a strong slate of candidates to fill the assistant dean vacancy.

Indeed, it would be hard to imagine how any other candidate could have demonstrated a stronger association with the University and Hajim School—or keener insights into how they operate

“That’s why I am thrilled to announce that Alvin has been selected as our new assistant dean—and excited to work with him in taking Hajim School advising, initiatives, and programs to the next level!” Hajim Dean Wendi Heinzelman announced.

A ‘very good experience’ as an undergrad

Lomibao says he knew, after having a “really good experience” as an undergraduate, that he would have a “lifelong relationship with the University of Rochester.”

Lomibao was president of the student’s association, a member of Alpha Delta Phi Fraternity and Senior Class Council, and majored in biomedical engineering with minors in chemistry and music. “I was amazed by the breadth of content, skills, and opportunities available to BME students, so I kept with it,” he says.

After graduation, Lomibao moved to New York City for a two-year stint as an academic associate with Northwell Health, New York state’s largest integrated healthcare network. But he kept in close touch with his alma mater. Lomibao read @Rochester every morning and the Hajim School’s memo every week. In his spare time, he conducted alumni interviews for the Office of Admissions and helped mentor students through the Greene Career Center.

When Lomibao then returned to Rochester as a graduate student, he was part of the second cohort of medical device design students in the Center for Medical Technology and Innovation (CMTI) master’s degree program. Lomibao’s team advanced to the finals of the New York Business Plan Competition. He began looking for positions in the medical device or health care technology sectors while working part-time with Wilson Commons Student Activities.

However, as the workload in WCSA increased, so did Lomibao’s responsibilities.

“I wasn’t really looking to get into higher education,” Lomibao says. “But the opportunities just kept presenting themselves. I think I’ve always been motivated to find the best ways that I can use my talents and proximity to the University to help other students have a great experience like I had.”

So, rather than pursue a career in health technology, Lomibao began working full time as a student organization advisor and project manager. His duties included planning events like Winterfest weekend and Dandelion Day. He also helped undergraduate student groups undertake large scale programs, such as concerts and festivals, providing them funding support from a $375,000 budget.

After he heard about the new assistant director position in the Hajim School--created in response to school’s dramatic enrollment increases--Lomibao applied.

As assistant director he helped the school:

In addition, Lomibao took on a larger advising role during the last two years. This included working individually with up to 100 students a year under the new College Advising Model.

Lomibao also advocated for student interests on a College-wide committee that focused on co-curricular experiences for students at the height of the pandemic. He served on another committee that planned virtual 2020 commencement activities.

A propensity to learn, communicate, and build relationships

When he applied for the assistant dean’s position, Lomibao cited his “propensity to learn and teach new software systems,” his “facility with interpreting and communicating data,” and his “comfort with relationship building and systems thinking” among his qualifications for the job.

He also described approaching projects with a design process that includes involving the right stakeholders, defining a need, ideating solutions that fit the constraints, advocating for necessary resources, and then assessing and iterating to refine the solutions.

In a recent interview, Lomibao says the top priority for his team of 5 advisors, is “related to the fact that we are now back in person.”

For example, during the transition to remote learning at the height of COVID 19 last year, the advising office “went to a model where we were doing everything remotely,” he says. “So now we have to take a look at the services and business processes our office took from paper to online and decide whether we want to bring them back to paper or keep them online.”

The fact that Zoom” is so ubiquitous now means that we’re able to hold more meetings, with more people,” Lomibao says.  “It’s not as cumbersome to attend meetings. I think those are all pluses. So, we’re trying to figure out how we can best leverage that to serve the most students and meet them where they are.”