The ‘best possible place’ to study both piano and photons

Nicholas Achuthan’23 arrived at the University of Rochester knowing he wanted to major in a STEM or engineering discipline, but not sure which one. “I didn’t have the slightest idea,” he says.

Achuthan also hoped to take piano lessons at the University’s world-renowned Eastman School of Music to further his passion for performing classical music.

Just look at how far he has come since then.

This semester he is taking lessons with Eastman faculty member Vincent Lenti, emeritus professor of piano. Only a limited number of River Campus students not pursuing a degree at Eastman study with a faculty member there.

“Nicholas is a wonderful student,” Lenti says. “I find him to have good skills as a pianist, fine sensitivity to music, and a passion for playing the piano. I look forward to my continued involvement in his pianistic and musical development.”

Achuthan recently was co-winner of a concerto competition sponsored by the River Campus Department of Music and will appear in concert next spring with the University of Rochester Symphony Orchestra.

And he has discovered another talent: for optics. When Achuthan is not practicing at the keyboard, he’s teaching other students and doing research in the Cardenas Lab for Nanoscale and Integrated Photonics as he pursues his major at the University’s venerable Institute of Optics.

Achuthan is almost incredulous at his good fortune to be in the perfect place to pursue two such diverse interests.

“The extent to which I’m getting involved in music and being able to take it to this level, working with Professor Lenti and Eastman degree students, is way further than I would have ever imagined,” Achuthan says.

“Not only that, now that I realize how much I like the field of optics, there’s really not a better school in the country. So, when it comes to a music and optics combination, this is undoubtedly the best possible place. You could not find any other place that even comes close.”

‘Totally in the zone’ at age 7

Achuthan, who is from Chicago, first became interested in playing the piano when he was 7 years old. An older cousin brought an electric keyboard to a family reunion. “My mom would hear a piece being played by my older cousin, who was already learning piano. And then 10 minutes later she would hear the same piece, a lot slower and a lot worse, and see me trying to figure it out, by ear,” Achuthan says. 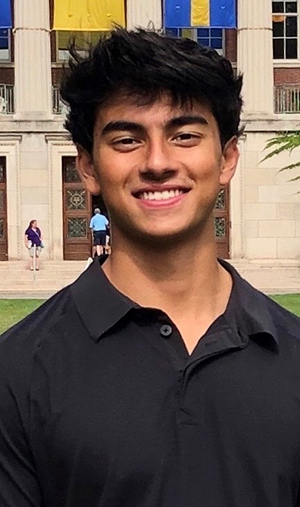 “I was just totally in the zone, trying to match what I heard my cousin playing.”

At first, Achuthan played piano for his own enjoyment. He even stopped taking lessons during middle school

A key moment for Achuthan came during his sophomore year at Latin School of Chicago, when he began thinking about applying for college. He was doing well in math and science and was also active in music ensembles. “It was a very introspective time,” Achuthan says. “The colleges want to know what you do outside of school, what it is that really inspires you—what is your identifier. For me, it was piano.”

He began taking lessons again, this time with Regina Syrkin, a teacher at the DePaul College community music division who graduated from the Russian conservatory system. “She helped take my playing to the next level. That's when my passion for the instrument really started to kick in,” Achuthan says.

As soon as he arrived at Rochester, Achuthan successfully auditioned at Eastman to take piano lessons. For two years Achuthan worked with Jidong Zhong, an Eastman doctoral student who graduated this spring.

During orientation, Achuthan also attended Dean Wendi Heinzelman’s traditional greeting to first year engineering and computer science students. At the end of the session, students were asked to go to other rooms to learn more about their intended majors. “I wasn’t sure where to go,” Achuthan says. “I didn’t know if they had an undecided section.” So, he followed a group of students interested in signing up for either optics or engineering science.

He was handed a folder full of information about optics. “I knew it was a special program at Rochester, though I didn’t know the caliber of it at that time,” Achuthan says. “So, I thought I would give it a try.”

He discovered that optics is a “great balance of math and physics. And the field is so broad,” Achuthan says. His credits for the advanced physics courses he took in high school enabled him to start taking sophomore level classes in optics his first semester.

During his sophomore year, he received the O’Brien Book award, presented to arts, sciences and engineering students who excel academically and in leadership roles in their first year. Achuthan began serving as a workshop leader and group leader—essentially a teaching assistant—at the Institute of Optics. He worked as an office assistant for Dustin Newman, the institute’s undergraduate program director, who became one of Achuthan’s favorite mentors. “He’s just amazing,” Achuthan says. “Super supportive, super understanding. I know I can talk to him about anything; it doesn’t have to be optics related.”

And Achuthan found his niche: Photonics.

“Typical, everyday electronics use electrons to send signals,” Achuthan explains. “The idea is to replace them with photons, which are more efficient and faster. If those every day electronic devices can migrate to a photonic platform, there’s a ton of potential for improving information processing and all sorts of other applications.”

During his sophomore year, Achuthan joined the lab of Jaime Cardenas, assistant professor of optics, as a research assistant. Cardenas “is great to share ideas with and a very encouraging professor who really sees his students as family,” Achuthan says.” He has made me feel like a significant part of his group, even though I’m not writing a PhD thesis or publishing journal articles.  He has made sure I’ve had a really valuable experience from my time in his group, which I am really grateful for.”

Achuthan also had a valuable experience this past summer as an intern with Jacob Grosek, a mathematician and senior scientist at the Air Force Research Laboratory, lending an optics perspective to Grosek’s work on a project involving laser amplifiers.

Despite the virtual format because of COVID, Achuthan says, “I learned a ton.”

‘To play a concerto will always be a dream of mine’

Achuthan says his interests in music and optics overlap, starting with the fact that sound and light are both produced by waves. Moreover, competing in a concerto competition, or taking an exam in optics, both involve a “strikingly similar” mindset, Achuthan says. “So not only does piano give me a mental break from studying, which is important, but I’m 100 percent convinced that my musical involvements are helping me with the academics as well.

This semester, under Lenti’s tutelage, Achuthan has been practicing at the keyboard more than ever before.

“I am so incredibly, incredibly grateful for this opportunity,” Achuthan says. “The standard he is holding me to is that he’s not treating me any differently than an Eastman student. He tells me he doesn't want people to say, ‘oh, you play well for an optics major.’ Which I value a lot, because he’s really pushing me to take my playing to the next level.”

Does the next level mean an eventual career in music?

“I am always wrestling with that,” Achuthan says. “Not only is the field immensely competitive, but immensely difficult to make a living at.” So, he could be perfectly happy continuing to hone his skills just “for my own fulfillment, for the love of the music,” Achuthan says.

For now, Achuthan is leaning toward pursuing a master’s degree in either optics or in physics with an optics-focused thesis. “I want go further with my education, because the more you study, the more you want to learn and the more you realize what you don't know. And for me I don’t feel satisfied until I fully understand concepts that I’ve been exposed to.

One career possibility he’s considering is doing research in a national lab. “But whatever job I do, I want it to be something that requires a deep conceptual understanding because I really value that,” Achuthan says.

And there will always be music in his life. “To listen to a beautiful rendition of a piece I really like, and to then be able to play it and take it one step further and do something of my own with it, that’s just awesome,” Achuthan says.

Asked what he would like to be doing 10 to 20 years from, Achuthan replies: “I know more what kind of musician I see myself being. I want to perform with orchestras. To play a concerto with an orchestra will always be a dream of mine.”