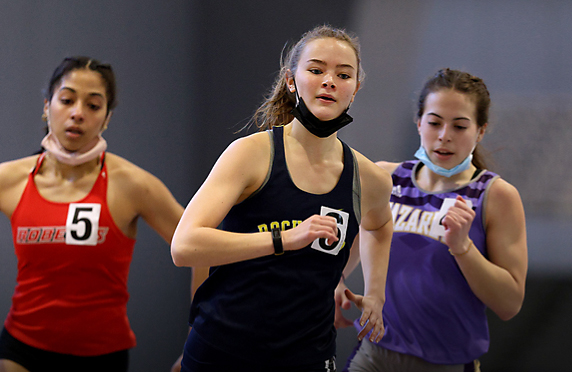 Kendra Watson ’22 balances a major in chemical engineering with running hurdles for the women’s varsity track and field team. “I find that when we’re in the middle of our track season, and I’m going to practice twice a day and having meets on the weekend, that’s when I’m the most organized. When I only have one chunk in a day to get something done, I just do it. I don’t get distracted by something else. Besides, the track is where all my good friends are, and it’s just a great release for sure.”

Fortunately, she has found plenty of ways to keep her happy at the University of Rochester and its Hajim School of Engineering and Applied Sciences.

Watson balances the rigors of pursuing a major in chemical engineering and a minor in German with the rush that comes with clearing the hurdles for the women’s varsity track and field team.

She has taken trumpet lessons at the University’s famed Eastman School of Music, spent four weeks in Berlin studying German language and culture, was a teaching assistant for two chemistry classes, and serves as the programming and events chair for Tau Beta Pi, the engineering honors society.

This summer Watson, a GEAR scholar, worked as an Eisenberg Research Fellow with Astrid Müller, assistant professor of chemical engineering, on a project involving the electroreduction of CO2 to methanol using nanocatalysts.

Along the way she has “made the best friends I have ever had in my life,” Watson says.

And she has excelled academically, receiving:

“I’ve just had a really good experience, kept busy, and have had a lot of opportunities here,” Watson says.

Science kits and solder at an early age

Watson’s college experiences continue a trend that began for her in childhood, growing up on Mercer Island near Seattle, WA. “I did everything when I was a kid,” Watson says. Soccer. Trumpet lessons. Dance choir. Skiing. Horseback riding. Track.

Her father, a vascular surgeon, and her mother, a corporate banker, were “supportive, but with no amount of extreme pressure, ever,” Watson says.

Her grandfather, who works as an electrical engineer at Lawrence Livermore National Laboratory, was a big influence, she says. “He brought me science kits, taught me to solder, and we would take electronic devices apart and rebuild them together.

“It definitely stuck with me.”

Watson’s interests in science and engineering were strengthened when she attended a four-week STEM program for women high school students at Smith College in Northampton, MA, the summer after her junior year. “I was there with a lot of really smart girls, and it was empowering,” Watson says. “It really solidified that, yes, these are the kind of people I want to be working with the rest of my life.”

That summer she also received a letter from Sam Albert, director of track and field, wondering if she would like to attend the University of Rochester.

Watson visited the campus in October. “I missed my senior homecoming to do the visit, but it was totally worth it,” she says.

Watson had already accompanied her older sister on similar visits to college campuses and had also gone on a couple of her own. “So, I had seen a ton of schools, but this was the first place where I arrived and just really, really, really liked it,” Watson says.

During a tour of the campus, including the Hajim School, “I saw myself in most of the people I met. I got along with everybody, and the academics were exactly what I was looking for,” she says. “Coach Albert was phenomenal, and the connection to Eastman (School of Music) was also a really cool opportunity.”

Her acceptance into the Hajim School’s GEAR program, guaranteeing her admission to any of the school’s master’s programs as long as she maintains at least a 3.3 GPA, was icing on the cake. 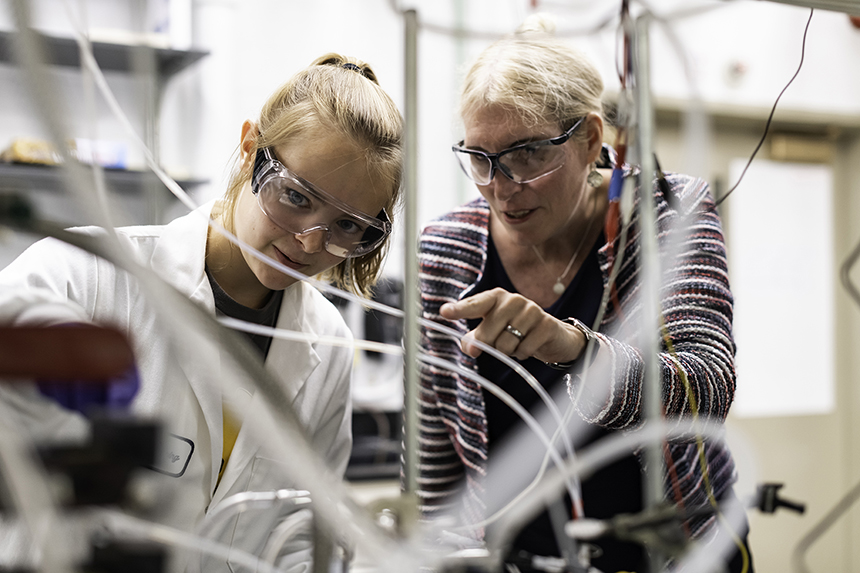 Kendra Watson ’22 with Astrid Müller, assistant professor of chemical engineering, in the lab, where Watson worked this summer as an Eisenberg Research Fellow.

A role model to emulate

COVID aside, her experience at the University of Rochester has been “absolutely fantastic,” Watson says.

She has especially appreciated the opportunity to do research as an undergraduate. Watson approached Müller about working with her research group because she was interested in Müller’s focus on sustainable energy solutions, in particular developing controlled nanomaterials for the electroreduction of CO2 to methanol.

But she also wanted to take advantage of the opportunity to work for a female role model, given the underrepresentation of women in STEM fields.

She’s looking forward to continuing to work on her project during her senior year. Watson even changed her schedule of classes to include courses about fuel cells and electrochemistry to better complement her work in the lab and help her better understand it.

As a result of her work with Müller, Watson has decided to continue in research, earn a PhD, and start a research group of her own someday.

“I really like academia,” she says. “I just thrive in it.”

Watson says she will do her best to follow Müller’s example.

“She’s incredible,” Watson says. “She’s really smart, really straightforward, and passionate about what she does.

“And she really wants to help people to be the best they can be.”