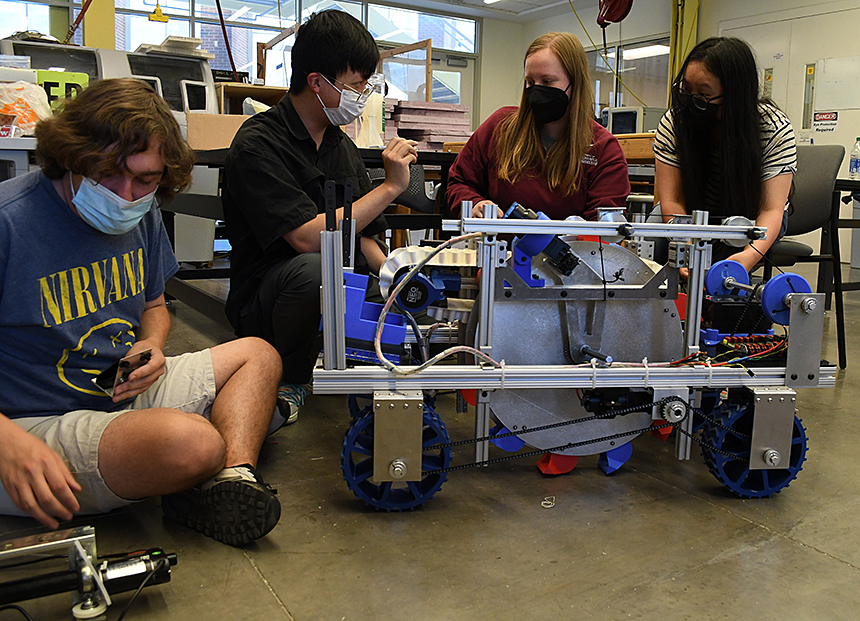 Left to right, Christopher Piatek, Lianming Hu, Francesca Daszak, and Rachael He of the Lunabotics team work on their automated mining robot in the Fabrication Studio at Rettner Hall.

A robotics team from the University of Rochester will put months of work and several all-nighters on the line at Kennedy Space Center during May 23-27.

The students will send their automated mining robot into a replica lunar landscape, testing it against 47 university teams from across the country, during the annual NASA (National Aeronautics and Space Administration) Lunabotics competition. This year’s competition simulates the space agency’s upcoming Artemis mission to the moon.

“We have been aiming high to have a fully autonomous robot,” says team co-captain Francesca Daszak ’23, a mechanical engineering major and president of the UR Robotics student organization. “It’s not required, but it’s very highly encouraged.”

Autonomous means that the robot must navigate on its own, sensing any obstacles in its path without any input from team members. A depth-sensing camera is used to sense the obstacles and map the environment. Then, the robot will autonomously navigate this environment using planning algorithms to reach the mining zone. The robot must dig far enough into the surface to retrieve a payload of gravel and take it to a designated container. All the while using minimum energy—and raising a minimum of dust.  (You can get a sense of the exacting NASA’s standards for this competition by glancing through the 63-page rule book.)

The students are doing this purely as an extracurricular activity—for the camaraderie, the joy of competition, and the allure of robotics.

“One of the greatest things about this is that people are all full of passion and very willing to devote their time,” says Lianming Hu ’23, of mechanical engineering. “Sometimes we stay the whole night working.”

And what better way to gain an understanding of what real-life engineering is all about? “Ultimately I think it is one of the more important things we do can on campus,” says Christopher Piatek ’23 of mechanical engineering. “Even more than some classes, where you memorize how to do equations, solve some problems, but don’t get much hands-on experience.

“This is almost like an internship. You really get to see how the entire process works.”

Overcoming the challenges of a first-time team

The project began last year after Daszak and fellow UR Robotics officers Benned Hedegaard ’22 of computer science and Joseph Vaccarella ’23 of mechanical engineering first learned about the competition. Daszak had already been promoting club projects with real-life, industrial applications as compared to building battlebots that fight each other.

The club’s faculty advisor, Thomas Howard, an assistant professor of electrical and computer engineering, encouraged the team to pursue a first-time entry into the Lunabotics competition. Howard, a former research technologist at NASA’s Jet Propulsion Laboratory, is a leading expert in robotics and autonomous vehicles. He helped the team get established, and successfully lobbied for funding support from the departments of mechanical engineering, electrical and computer engineering, and computer science, and from the Hajim School of Engineering and Applied Sciences. The University’s Students' Association is also helping.

“But otherwise, he’s been very much in favor of us doing our own work, and achieving our own goals,” Daszak says.

An original core team of 7 members quickly grew to about 30. Even students from non-engineering fields were drawn by the opportunity to participate in a NASA-sponsored robotics competition.

This posed initial challenges for Daszak and other team leaders because many of the students had no prior experience in robotics.

Training workshops had to be organized and team members encouraged to attend.

The complex technological challenges of the robot—including autonomous operation—required breaking the project into multiple tasks, assigning each to a sub-team, then making sure the sub-teams didn’t interfere with each other. That is the essence of systems engineering, which NASA emphasizes as a key part of the competition.

In addition, the need to secure funding and shortages caused by the pandemic meant prototyping and initial phases of assembly were significantly delayed. “We were constantly having to work really hard to be on time with everything, which is especially difficult with a first-time team,” Daszak says.

So, just getting this far has been a major accomplishment—and an invaluable learning experience.

For example, Piatek says the project brought home the importance of “always allocating much, much more time than you think you are going to need” for each task. Even simple components can be problematic, he explains. And in a robot especially, with so many different mechanisms and parts involved, “you’re always going to find interference between them.

“There are times when you need to scrap entire systems because something entirely unforeseen hasn’t worked out.”

The project was also a reminder for students to not assume that a part designed on a computer with CAD (computer-aided design) can actually be fabricated, Hu says.

The rules of the competition require the students to carefully document the team’s adherence to systems engineering. “It was very surprising to me how useful systems engineering actually is,” Daszak says. “It has been the thing that has saved us so many times."

Also important was the team's use of critical path management (CPM), a tool suggested by Chris Muir, a professor mechanical engineering who worked 18 years as a principal engineer for Kodak. The core idea of CPM is to analyze the longest remaining sequence of tasks before project completion.

“It is so satisfying to do it well—to document everything that has to done, so that everyone knows what they’re doing. It is something that can be applied even in regular life,” she says.

Daszak now applies CPM to organizing her homework for classes.

Looking forward to next year

Last fall, the team scored 10 out of 10 on its project management plan, placing it in the top eight teams in the initial phase of the competition. At that point, 67 other teams were competing. The top 48 teams were chosen to attend the competition in person in May.

“This is first and foremost a student effort—the credit really goes to the outstanding undergraduates working on the project,” Howard emphasized in an email congratulating the students.

In addition to helping to get the team started, Howard met weekly with team leads to discuss and review technical progress, budget, and schedule.  Christine Pratt, a senior technical associate in the Department of Mechanical Engineering, and James Alkins, the senior laboratory engineer who manages the Fabrication Studio and Shop in Rettner Hall, have helped the team manufacture specialized parts. Muir attended design reviews—systems engineering milestones—where the team members discussed their progress and evaluated their design solutions to date.

Already Daszak is looking forward to entering a team in Lunabotics or another national robotics competition again next year.

Daszak was introduced to competitive robotics in high school. “It was very inspirational. It was my introduction to engineering, and it really changed the way that I viewed what I wanted to do in college and my life. I would not have considered engineering otherwise.

“There are all these robotics teams and competitions that students can participate in, literally from the age of 8 all the way through high school,” she adds. But they don’t continue into college. Students arrive at college and wonder “Where’s the team?”

Now they know. At the University of Rochester. 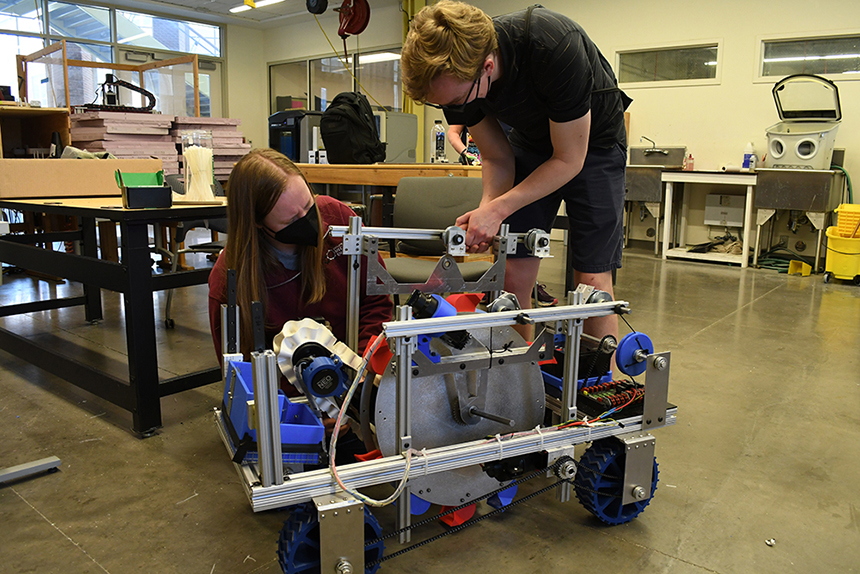 Co-captain Benned Hedegaard ’22 of computer science, at right, led the autonomy sub-team that developed the complex algorithms that help guide the mining robot.