Kelsey Lee ’23 excels at both piano and optics

Rochester dual degree program enables her to pursue both

On any given day, Kelsey Lee ’23 may begin her morning at the keyboard of a Steinway grand piano at the Eastman School of Music in downtown Rochester, practicing a Chopin polonaise or rehearsing for a recital.

Later, after a half-hour ride on a shuttle bus to the University of Rochester River Campus, she will be testing and analyzing micro ringed resonators in the Cardenas Lab for Nanoscale and Integrated Photonics at the Institute of Optics. Or taking a class in lens design. Or serving as a teaching assistant for Math Methods in Optics &Physics. 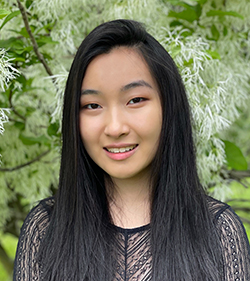 Lee is pursuing rigorous degrees in both piano performance and optical engineering as part of the Eastman School’s dual degree program. The program combines study at the Eastman and at the University’s College of Arts, Sciences, and Engineering, leading to a bachelor of music and either a bachelor of arts or a bachelor of science.

Though Lee has chosen one of the hardest degree combinations imaginable, she is excelling.

“Kelsey, your continued excellence in your musical and academic endeavors is simply remarkable,” Eastman School associate deans Donna Brink Fox and John Hain wrote in a letter to Lee, congratulating her on being named recipient of a prestigious Presser Undergraduate Scholar Award. “We are delighted to be able to recognize your achievements . . . and to celebrate you: the individual, the musician, and the scholar.”

The University of Rochester is unique in having internationally recognized programs in both music and optics. Lee is making the most of this opportunity to pursue her passion for music and explore an exciting way to apply her love for physics and mathematics.

“I knew Rochester had a good dual degree program,” Lee says. “But it wasn’t until I got here that I fully realized just how convenient it is and supportive of its students.

The making of a prize-winning pianist

Lee was born in New York City, grew up in Beijing, China, for eight years, then moved with her parents to Summit, NJ.

Her interest in music began at age 5 when her parents bought an upright piano for her birthday. There was no expectation that “I was going to be serious about music right away,” Lee says. However, by elementary school she was playing the oboe as well, and by middle and high school, music had become a big part of Lee’s life. “I was playing a lot in school orchestras, and that was very fun for me,” she says.

Lee was also making a mark in national and regional piano competitions, including first prizes at the Marian Garcia International Piano Competition in the Pre-collegiate Division (2017), the Steinway and Sons Piano Competition, and the Greater Princeton Steinway Society Classical Competition. Lee also took a Grand Prize in the National League of Performing Arts Young Virtuosi Competition.

During these events, Lee met Marina Lomazov, an Eastman School professor of piano, and heard some of Lomazov’s passionate, charismatic performances that have won critical acclaim. When Lee’s acceptance letter from the Eastman School confirmed she would be studying with Lomazov, Lee knew Rochester was, indeed, a good choice for her.

“A lot of teachers would only focus on performing and teaching, but I admire the fact that she (Lomazov) also remains involved in music festivals and music events, such as the Southeastern Piano Festival and YoungArts. At that time, I was thinking I might go into music as a career and would also be involved in those things. I would be able to learn how to manage that from her,” Lee says.

“I also appreciate that she’s really supportive of my dual major.”

Why optics was a perfect match

When Lee arrived at Rochester, optics was the farthest thing from her mind.  “At the time, I probably didn’t even know what optics was,” she says.

However, applied math, which she intended as her dual major, was not to Lee’s liking. She sampled a course in mechanical engineering. Then, talking to other students, she learned that optics involved a lot of the math and physics she enjoyed in high school.

She decided to give optics a try. It ended up being a perfect match. “Kelsey is an amazing student and is excelling in her studies here at the Institute,” says Dustin Newman, undergraduate program director.

“It’s a little bit heavy on the theory side, compared to some of the other classes that we’re taking, but I really like that part,” Lee says. And Berger definitely has a knack for teaching. He is recipient of the University’s Goergen Award for Distinguished Achievement and Artistry in Undergraduate Teaching (2007) and the Edward Peck Curtis Award for Excellence in Undergraduate Teaching (2016).

Lee is also excited about the research she recently started doing in the lab of Jaime Cardenas, assistant professor optics, who specializes in creating nanoscale optical devices with microfabrication techniques and in overcoming the limitations of current photonic devices that generate and manipulate photons.

She is working with PhD student Xiaotong He on a project that involves applying electrical signals to micro ring resonators to change the frequency of light after it is emitted by a laser. “In the lab, I test the ring resonators and take down data, but I also spend a lot of time on the computer modeling and working with the data.  It’s a really good balance of being in and out of the lab,” she says.

Newman has been a particularly valuable mentor. “He’s been amazing helping me plan and navigate through my relatively unconventional program,” Lee says

“The hardest thing about the Dual Degree Program is balance because the things that you’re doing on the two campuses are so different —especially in my case, because optical engineering is so different from piano performance,” Lee said in an interview with the student Campus Times newspaper. “It has been getting trickier as I advance through the curriculums, because it’s harder to prioritize between my classes. Am I going to put more energy into my optics classes or my music history class? “

There is a common thread for Dual Degree students, she added. “Although it is really stressful sometimes, I feel like the reason we do it is because we really enjoy all of the classes. I love my classes at both schools.”

Her career will be in optics, but music will remain important

Above all, the Dual Degree program has helped Lee decide on a future career path--in optics.

After graduation, Lee plans to pursue a graduate degree. At this point, that could mean getting a either a master’s or PhD in optics. It could then mean going into either industry or staying in academia.

“All are on the table,” Lee says. “But I think the end goal is probably industry. I really do like the things I am doing now in the Cardenas lab and could see myself going into the photonics industry.

“But I am still in the exploratory phase.”

One thing is certain.

“Music is always going to be a part of my life,” she says. “My ideal would be to have a job in optics, and on the side be able to do something with piano, either teaching or entering nonprofessional competitions or giving concerts once in a while in a local venue.”

She has missed not having time to play the oboe in an orchestra, like she did in high school. There may be opportunities to do that as well.

“That would really be fun,” Lee says. “I’m really grateful that music is something that will be there for me for essentially the rest of my life.”