Abbey Kampel finds a framework for her many research experiences 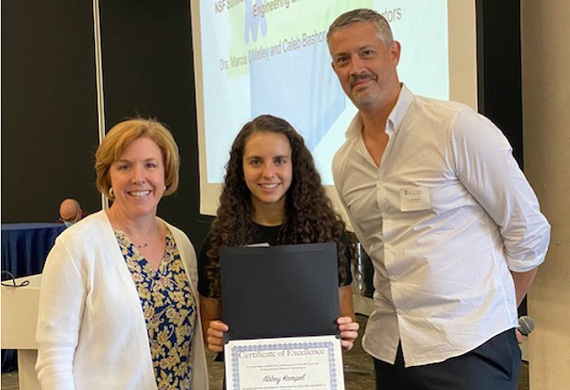 As Abbey Kampel ’23 applies to graduate schools she can list an impressive number of internships and research experiences at the University of Rochester and other major universities.

The busy, hard-working biomedical engineering and psychology dual major at Rochester can also point to her participation in the University’s Grand Challenges Scholar program. The GCSP has provided her a framework to “tie all of these experiences together,” Kampel says.

The program invites undergraduates to pick one of 14 “grand challenges” of the 21st century, identified by the National Academy of Engineering (NAE). Students then tailor their academic experiences to address the challenge they’ve chosen. They are required to demonstrate five key competencies in doing so: research, entrepreneurship, interdisciplinary studies, global experience, and service.

As they near the end of the program, Grand Challenges Scholars prepare a report reflecting on their experience.

“This is an excellent program for any student, in any discipline,” says Kampel, whose grand challenge is reverse engineering of the brain. “The challenges involve a wide range of topics, and it’s not a lot of additional work on top of what students are already doing. But it synthesizes all of that information into something coherent.”

Kampel, who is from Marietta, Ga., first became interested in doing research as part of a capstone program at Walton High School. The program introduced “what research was, how to define a problem, and all the methodologies that go behind constructing a research question and carrying it out,” she says.

A “major milestone” during high school was her participation in a summer research program at Oxford University in England, studying molecular medicine and robotics.

“I ended up loving both of them,” Kampel says. “And that’s what led me to biomedical engineering.”

She chose to attend the University of Rochester, an R1 research institution, because “research is at the core of what they do,” Kampel says. The University’s open curriculum, moreover, gave her the flexibility to also major in psychology, which contributes an additional, multidisciplinary aspect to reverse engineering of the brain.

“It’s worked out great,” Kampel says. “The University is giving me so many opportunities to get involved in research. I have two research positions on campus, and it has also helped tremendously in my applications to do research off campus during the summers.”

Internships ‘have all taught me different lessons’

Not even the pandemic could stop Kampel. During 2021, even labs were closed. Nonetheless, that summer she managed to complete a Grand Challenges Scholars entrepreneurship program through Arizona State University and a research program offered through Dartmouth. She then completed a US Naval Academy research program that fall while attending classes at Rochester.

“All of those positions were virtual, which helped with scheduling,” Kampel says. “They also did a really good job of keeping us engaged and keeping us interactive with the materials.”

For example, Arizona State sent Kampel and each of her teammates complete Arduino kits. So, their zoom sessions doing coding and building circuits still involved hands-on experience. They designed and developed a prototype to address a work-life balance problem for the Allstate insurance company.

All of her internships have been valuable, Kampel says. “They’ve all taught me different lessons.” However, the REU (research experience for undergraduates) program she attended this past summer at Rice University “really stands out,” Kampel says. She worked in the lab of Jacob Robinson, associate professor of electrical and computer engineering and of bioengineering, helping develop the first optogenic, transgenic Hydra line to study neuronal circuitry.

Even amidst all this research activity—and pursuing a double major—Kampel has managed to carve out time for extracurricular rock climbing and wrestling and judo.

Rock climbing has been a passion for Kampel since childhood, when she started participating in it as a bonding activity with her father. She has served as competition chair and compliance officer for the University’s student club. Members convene for events at local gyms and participate in local and national competitions. “For a couple of years, we brought a portable rock-climbing wall to campus to engage everyone. That was super cool,” Kampel says. Despite interruptions at the height of COVID, the club has now resumed events and participation in competitions.

During her first year on campus, Kampel visited a practice session of the student wrestling and judo club. “I didn’t know anything about it. I just thought it would be fun to try,” Kampel says. “I really loved it.” She even served as the club’s president and business manager, an experience that “taught me a lot about leadership, and organization, and things in that realm. I had a lot of fun.”

That, too, can be added to her resume when she applies for graduate school.

Next: A career in academia?

Kampel’s goal is to complete a PhD in neuro-engineering, studying neurocircuits in the brain.

And after that? “A professor advised me to plan out the next five or six years instead of trying to plan out the next 30 or 40,” Kampel says. “My ideal career is to become a tenure-track professor performing research and teaching students. But life could go in many different directions. So, I’m not dead set on it.”

She had not even considered a career in academia until recently, Kampel says. Several factors influenced her. She has enjoyed learning from professors and mentors who are fully engaged with teaching material; she’s grateful for the way “they were able teach me things that impacted my life in a significant way.”

Her enjoyment as a teaching assistant for introductory physics — watching undergraduates under her tutelage “struggle with problems, and then eventually gain understanding and competence”—also influenced her.

Wherever she lands, Kampel wants to be doing research, answering questions, helping solve grand challenges. “Whether it’s in neuro-engineering, or health in general, I want to do something to improve the quality of life for other people,” she says.