Amanda Adams ‘22 learns to push the boundaries of science

Gather 12 talented, University of Rochester undergraduates from three different class years, multiple countries, and a variety of majors. Give them relatively free rein to “push the boundaries of synthetic biology” by developing-- from scratch--a solution to an important global health challenge of their choosing. And tell them they need to be ready to compete in a global competition within the year.

What do you get? An award-winning, innovative device that instantaneously diagnoses sepsis based on biomarkers in a person’s sweat. 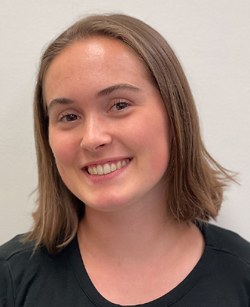 And you get team members like Amanda Adams ’22, a biomedical engineering major who emerged from last year’s iGEM (International Genetically Engineered Machine) Competition with a newfound confidence and sense of purpose.

“Working in that kind of student-led team, and getting hands-on experience in the lab, gave me a lot of confidence about going on to graduate school,” says Adams. “I realized I can do it. I can manage my time well. I can do a high level of scientific work. And it helped narrow down my interests for graduate school.”

Her participation in iGEM also qualified Adams to be recognized as a Grand Challenges Scholar. The University program invites students to address one of 14 grand challenges of the 21st century as identified by the National Academy of Engineering. Students must demonstrate competencies in research, interdisciplinary study, entrepreneurship, global experience, and service.

“As a biomedical engineering student, I am fascinated by the ways in which we can apply engineering tools to solve complex medical problems, and I aim to pursue these types of challenges as a graduate student, and later on in my career,” she says

Adams, who is from Williamsburg, Mass., became interested in science at an early age. “When I was a little kid, I really wanted to be a doctor,” she says. Her parents encouraged her, buying activity books about the human body and medicine-related toys.

Adams likes math as well and realized that majoring in biomedical engineering would be a great way to combine those interests.

She decided to attend the University of Rochester because family members lived nearby, and because of the strong reputation of University’s biomedical engineering department and the wealth of activities she could participate in.

“I’ve really loved it here,” she says. “I’ve met a really great community of people. Everybody is well-rounded, they have a lot of great interests, and are very interesting to talk with. I’ve had some really good, engaging classes.”

She has also been able to continue several interests from middle and high school.

For example, Adams has participated in the varsity cross country and track teams all four years, earning recognition as a University Athletic Association All-Academic Athlete.

She sang for the women’s Treble Chorus, which includes Eastman School of Music students. “The director is a professor of music at Eastman, so it was a really cool way to take advantage of the fact that we have the music school too,” Adams says.

She’s pursuing a minor in Spanish and has applied for a Fulbright Fellowship to teach English to elementary students in Spain next school year.

“It would be a great experience to immerse myself in a different culture. It would definitely challenge me. It would help me improve my Spanish, and really use it in a way that I haven’t been able to yet,” Adams says. “And I also really like working with kids.”

An opportunity to do research, communicate to the public

Adams has been able to explore biomedical engineering in multiple ways. For example, she serves as a teaching assistant for a biomaterials class. Through last year, she was a member of the student Biomedical Engineering Society, serving as co-webmaster and coordinating social media communications.

Her first research experience was a summer internship in the Immunoengineering Research Lab of Ashish Kulkarni, assistant professor of chemical engineering at the University of Massachusetts Amherst.  Working with a graduate student, Adams assisted on a nanoparticle synthesis project and a microfluidics project for cancer immunotherapy.

As the manager of public relations for the iGEM team, Adams was the point person for communicating what the team was doing through press releases and the team’s social media pages. This included providing project updates, weekly newsletters, and accessible information about synthetic biology. It was a great opportunity to further hone her communications skills, Adams says.

She also contributed to the wetlab part of project, creating DNA aptamers—strands of oligonucleotides—that would bind to the proteins that serve as biomarkers of sepsis in a person’s sweat.

The iGEM competition involved about 350 teams from around the world. Adams especially enjoyed the opportunity to collaborate via zoom with teams from Hong Kong and the Netherlands, who were working on separate projects. The competition awarded additional points to teams that collaborated on learning and sharing lab techniques common to all their projects and helping critique each other’s work.

A future in pharmaceuticals beckons

Adams has applied to 10 different schools, including Rochester, to pursue a master’s degree in biomedical engineering, either next year or the following if she receives the Fulbright award.

“I would like to work in the pharmaceutical drug development industry, in R&D (research and discovery) doing hands on work in the lab,” Adams says.

There is another possibility too, she adds.

At a time of increased political polarization over COVID-19 and issues such as climate change, accurate communication about the work that scientists do is more important than ever in earning the public’s trust.

“Doing communications for iGEM helped me realize I can also contribute in that way as well,” Adams says.

See Adams' poster  describing how she fulfilled the GCS competencies.