Pivotal internships, experiences at Rochester show him a path for the future

When Joshua Batres ’22 and five other Engineers Without Borders (EWB) teammates visited a primary school in the Dominican Republic, they expected a water disinfection system installed on previous visits to be fully functional. 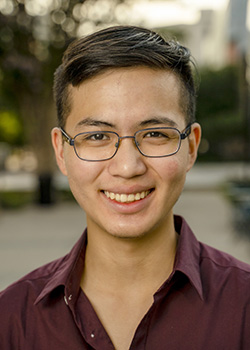 Instead, the University of Rochester undergraduate discovered that one of the school’s buildings was not getting any water at all. And, more importantly, students were refusing to drink the disinfected water being supplied to the rest of the school.

The water was too “hard” and left a metallic taste in their mouths. “They didn’t understand that it didn’t affect the safety of the water,” Batres says. “That was a disconnect we didn’t know about until we went to monitor the system.”

Batres, who is from Cuernavaca, Mexico, knows firsthand what it is like to live without reliable tap water and electricity. So, sustainability is a major interest of his. He came to the University with an open mind, willing to embrace as many experiences as possible, expecting to encounter the unexpected--and then change course accordingly. And that is exactly what has happened.

His experience with EWB, for example, was a pivotal one for Batres. “What piqued my interest the most was not so much engineering the technology for the project but working with the people who would be using our product,” he says. “I learned I’m not as passionate about technology per se, but how it is used.”

His participation in the University’s Grand Challenges Scholars program was also pivotal. GCS invites students to address one of 14 grand challenges of the 21st century identified by the National Academy of Engineering. They must demonstrate proficiencies in research, entrepreneurship, global experience, interdisciplinary study, and service.

The program enabled Batres to participate in a summer entrepreneurial program at Arizona State University, all expenses paid. “I had no knowledge of entrepreneurship,” Batres says. “We were working with sustainable businesses in the Phoenix area, basically working as consultants for them. It was all very business focused, and that was something very new to me. It was much more hands-on than I expected—and was something I really enjoyed.”

As a result of his EWB and GCSP experiences, Batres changed course. Three semesters after enrolling at the University as a chemical engineering major, he switched to dual major in engineering science and business.

Seeing both sides of start-up ecosystem ‘was really insightful’

Batres is a member of Phi Iota Alpha, a Latino fraternity. “Being a Mexican, it’s very interesting to see the other Latin American cultures in the United States. There are many similarities, but also many differences. Being part of the fraternity has been very significant in getting to know life in the United States better and getting more well connected over here,” Batres says.

The fraternity has co-sponsored events with other groups on campus, for example SADACA (Student Association for the Development of Arab Cultural Awareness), which introduced him to other cultures as well as he found the cultural intersection between the Latin and Arab cultures to be fascinating.

Batres has also participated in multiple internships with companies from as many sectors as possible, exploring which fields might offer the best fit for him.

At the height of COVID Batres worked remotely with the founder of WaitLess Medical, an IT startup in Arizona, prototyping the next generation of medical scheduling products and doing software testing. “Despite being unpaid, this internship was really helpful in finding out what it is like to work with a small start-up of only about six people,” Batres says.

This past summer, he worked with VelocityTX, a health science incubator in San Antonio, Texas. “Seeing the needs and how flexible you have to be when you work with early-stage companies was fascinating,” Batres says.

Thanks to these two internships, “I’ve been on both sides of the start-up ecosystem, which was really insightful,” he says.

Both sides of that ecosystem are now on the table as Batres considers a career addressing such grand challenges as sustainable energy and access to clean water in developing countries.

Making a difference, observing the impact

Batres is currently interning part time work MicroEra Power, a thermal energy storage startup that offers new ways to improve energy consumption in buildings and facilitate the grid transition to renewable energy. On April 1st, he was honored with the opportunity to present alongside the CEO of MicroEra Power, Ellie Rusling, at the 2022 MIT Energy Conference’s startup showcase, a showcase of the world’s cutting edge energy startups.

He has been accepted to the master’s degree program at the University through the Technical Entrepreneurship and Management (TEAM) program Administered by the Ain Center for Entrepreneurship, TEAM is a multidisciplinary, engineering management degree, designed for students with an engineering, science, or mathematics undergraduate degree, who wish to pursue a master’s level technical education in combination with business and leadership courses. However, he has deferred his acceptance as of the moment in order to pursue a full time role with MicroEra Power as the company’s technical business development lead, leading the marketing strategy and technology deployment for the start up.

Longer term Batres sees his career unfolding in stages: initially working with a start-up, then with a larger company helping to innovate new products, then switching to working for an incubator encouraging other start-ups.

“Maybe one day if I do make enough money, I might want to be venture capitalist, but I think that’s going to be way ahead,” Batres adds.

Wherever he lands, Batres wants to make a positive impact on society, on behalf of the clients he is working with.

“The start-up culture is very unique in being a place where you can observe the impact and really see the changes you are making,” he says. “And that really motivates me.”

Click here to see Batres' poster describing how he fulfilled the GCS competencies.