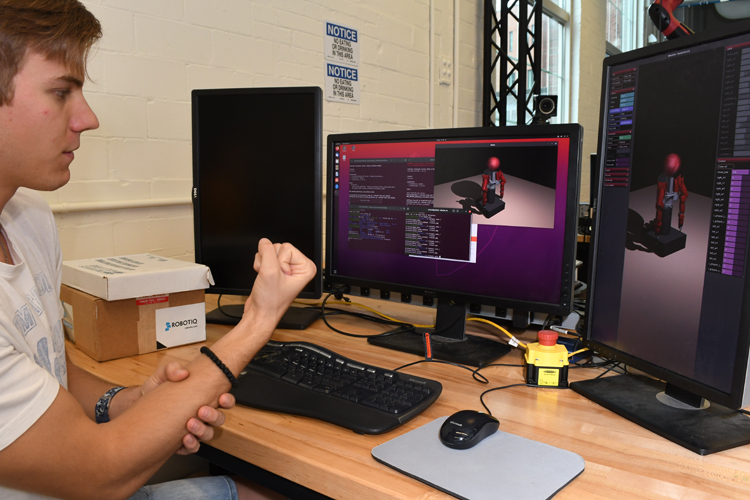 Nikola Raitsevits ’23 is working this summer in the Robotics and Artificial Intelligence Laboratory of Thomas Howard, associate professor of electrical and computer engineering. Here he shows the software used to prepare scripts, or commands, for the lab’s Baxter robot.

Research opportunities at the University of Rochester have propelled Nikola M. Raitsevits ’23 along an exciting path of discovery.

He has explored the inner workings of the brain’s waste removal system in the Mixing Lab of Associate Professor Douglas Kelley.

And now Raitsevits, a mechanical engineering major from Serbia and Greece, has acquired a newfound passion for robotics.

Classes he has taken from Thomas Howard, the University’s robotics expert—and the work he is doing in Howard’s Robotics and Artificial Intelligence Laboratory this summer—have fueled his interest in pursuing a PhD in the field.

“Robotics is a relatively new field, with a broad range of applications, and I believe it is going to transform the way things are operated,” says Raitsevits, who recently received a prestigious Tau Beta Pi Scholarship and the Department of Mechanical Engineering’s Kuichling Prize for academic excellence by a junior.

“The beauty of robotics is hidden behind the possibility of the human mind, and its applications are limitless,” says Raitsevits.

Every year, for example, thousands of miners are killed or injured, and many firemen lose their lives rescuing people. Robots can be trained for mine exploration and rescue missions, eventually performing all dangerous tasks, and helping people live safer.

In addition, “human-robot interactions, in particular, could have huge implications for people with disabilities, by being there for them 24/7 when humans are unable to attend to their needs,”  Raitsevits says.

Competitive in both sports and scholarship

From an early age, Raitsevits shared his family’s passion for sports. His grandfather ended his professional soccer career playing for the Buffalo Stallions approximately 40 years ago. His father is a former professional basketball player who recently began coaching.  Nikola played soccer in middle school at a “highly competitive level,” and later switched to basketball in high school.

While attending the Pinewood American International School of Thessaloniki, he earned both American high school and International Baccalaureate diplomas with departmental awards in Mathematics and Computer Science. His volunteer work included participation with the A21 Walk For Freedom to end human trafficking and Charity Donation for Villages in Plagiary for children and families in need.

“I like challenges and making a difference,” says Raitsevits. He initially considered a career in medicine, then discovered that “engineering is something I am even more passionate about.”

He wanted to come to the United States for college because it would offer unique educational opportunities and a diverse culture in which he could explore his interests, Raitsevits says. “I wanted to be surrounded by brilliant people who will help me grow.”

He chose the University of Rochester after hearing recruiter Jennifer Blask give a presentation describing the University’s strong curriculum.  The opportunities to work in research labs, participate in multiple student clubs, and even continue playing basketball at a Division 3 level, also appealed to Raitsevits.

“The school offered everything that I needed. When I arrived, nothing was as nice as when I met all the professors and started sharing their passion for knowledge.” 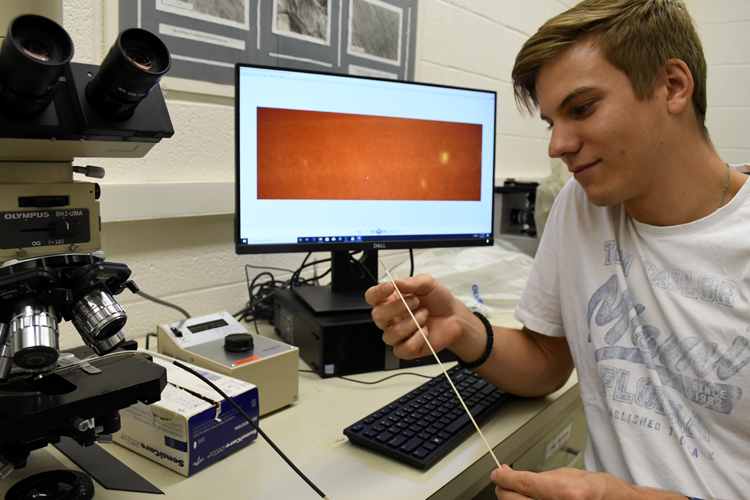 This summer, Raitsevits is using microscopic imaging of the flow of neuron precursor cells as part of his research in the Mixing Lab of Douglas Kelley. The goal is to determine the best way of injecting the cells into the brain—without damaging them in the process.

His path of discovery at Rochester

He arrived on campus intent on exploring the multiple paths open to him in mechanical engineering.  Raitsevits devoted his first couple of years primarily to classes and engineering-related clubs. For example, he joined the Baja SAE team, which designs and builds an off-road vehicle to compete against teams from other colleges. Raitsevits worked on several Baja projects until COVID limited his access to the team’s shop.

During the fall semester of 2020—when classes were conducted online because of the pandemic—Raitsevits began working as a residential advisor in one of the student dorms. “It was a difficult challenge, trying to help first-year students transition into that environment,” he says.

Stranded in Rochester during winter break because of COVID, Raitsevits began looking for research opportunities. An opening at Kelley’s Mixing Lab intrigued Raitsevits. One of the lab’s projects involves the fluid dynamics of the brain’s glymphatic system. The topic appealed to Raitsevits because of what he had learned about neurology from his mother, a clinical neuropsychologist who helps assess, diagnose, treat, and rehabilitate individuals with neurological, medical, or neurodevelopmental disorders.

In the spring of 2021, he began working in the lab with post-doctoral student Aditya Raghunadnan on a device to replicate the pulsatile flow in the brain’s glymphatic system resulting from the flow of blood in adjoining arteries.

“The system is crucial for understanding possible causes of Alzheimer’s disease and other neurodegenerative diseases, and perhaps curing them in the long run,” Raitsevits says.

“The fact that I could be part of the research that helped cure disease was a huge thing for me.”

He continues to work in the lab this summer on characterizing the shapes and sizes of the perivascular spaces that glymphatic fluids flow through. He is also contributing to a project studying the best way to inject neuron precursor cells into the brain.

His research experiences and discussions with Kelley have been pivotal, Raitsevits says. “They helped me realize that I want to pursue further education,” he says.

Last fall, Raitsevits’ interest in circuitry led him in a new direction. He took Howard’s class on Mechatronics and Embedded Systems, writing programs for embedded systems that interact with the world through sensors and actuators.  In retrospect, that class was also crucial, serving as the “bridge” to his new passion, Raitsevits says.

“The class was very challenging,” Raitsevits says. “But it was worth it”, he says. It enabled Raitsevits to complete a minor in electrical and computer engineering. Moreover, “Howard was dedicated to the class and worked overtime to help his students. And the satisfaction of programming something and seeing it work appealed to me,” he says.

After taking the Mobile Robot Estimation, Mapping, and Interaction course taught by Howard this spring, he joined Howard’s lab, where he’s working this summer on human-robot interactions, in addition to his work in Kelley’s lab. Specifically, Raitsevits has been reprogramming two of Howard’s one-armed robots – Sawyer and KUKA. He is also contributing to Howard’s work on developing new algorithms so robots can reason not only about the present but also the past and future state of objects in order to “talk” back and forth more effectively with their human partners on a wider variety of tasks.

“Professor Howard has a great way of saying that robotics is the last greatest thing that humanity is going to invent. Robotics is what I now see myself doing,” Raitsevits says.

“It has been an interesting progression.”

‘Working on something no one has worked on before

The University of Rochester has lived up to his expectations, Raitsevits says.

“The University and its faculty have given me many opportunities to explore my interests and understand what I am passionate about,” Raitsevits says. In addition to Kelley, for example, two other mechanical engineering faculty members—his advisor Chuang Ren, and Hesam Askari, who Raitsevits worked for as a teaching assistant— have all written recommendations for his awards and supported him in other ways.

The Tau Beta Pi Scholarship, Raitsevits says, gave him a chance to meet new people, including Wendi Heintzelman, dean of the Hajim School of Engineering and Applied Sciences. “Talking to Dean Heintzelman, I found out about her research in wireless communication and networking. She mentioned her collaboration with Professor Howard to achieve robot teaming, which impressed me how each field has its place in robotics,” Raitsevits says.

The University also instilled in him “the importance of using your knowledge to improve society, and to benefit the people around you.”

Raitsevits is interested in pursuing a Ph.D. in robotics. However, he is undecided whether he would then go into industry or stay in academia. Both options remain open.

In any event, Raitsevits says, he is excited about the prospects of continuing to do research, “working on something that nobody has worked on before, and discovering something that, if only briefly, nobody else in the world knows.”

In doing so, he hopes to follow in the footsteps of his namesake, Nikola Tesla, a Serbian-American inventor, electrical and mechanical engineer, and futurist best known for his contributions to the design of the modern alternating current electricity supply system.

“The first thing I did coming with my mom and sister to Rochester was to visit Niagara Falls and see the statue of Nikola Tesla,” Raitsevits says. Like Tesla, Raitsevits wants to “make a meaningful change in this world.”