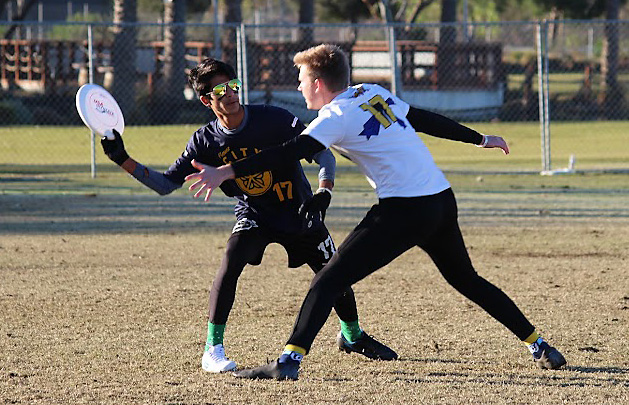 Sameer Jain ’23, at left, in action with the University of Rochester Club Ultimate Frisbee team. “We are highly competitive and went to ultimate frisbee DIII nationals in Los Angeles last fall,” says the Rochester Early Medical Scholar. “Ultimate Frisbee is definitely a big part of my college career.”

What motivates young people to not only excel as students, but dedicate themselves to serving others? And by doing so, exemplify the Meliora (ever better) values of the University of Rochester? 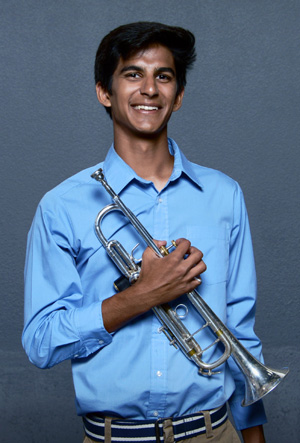 Sameer Jain ’23 of biomedical engineering is motivated by his family’s strong adherence to Jainism. The ancient Indian religion stresses, among other tenets, truthfulness and saving, protecting, and sheltering the life of any being.

“These ideals and morals led me to understand the importance of selflessness. They pushed me to give back to the community, and have made me the person I am today,” he says.

Jain was recognized this year as the “Outstanding Junior” in the Department of Biomedical Engineering. He is also a Rochester Early Medical Scholar, one of a select few chosen for the most competitive combined degree program at Rochester. As a result, he will immediately matriculate into the University’s School of Medicine and Dentistry after completing his engineering degree.

Jain has enjoyed undergraduate research experiences with top researchers at both the River Campus and Medical Center. Despite the rigors of pursuing an engineering degree, he‑has also managed to find time to attend twice weekly recitals and perform in concerts as a trumpeter for the University’s Chamber Orchestra. And play on the Club Ultimate Frisbee team all four years.

“The community here at the University of Rochester is amazing,” Jain says. “I’ve really enjoyed the smaller community feel. Everyone is pretty like-minded; everyone’s highly motivated; everyone is working towards a great goal.

“It’s definitely a great college experience and I wouldn’t give it up for the world,” he says.

‘Ever since I can remember I was fascinated by science’

Jain, who was born in Providence, RI, moved with his parents after fourth grade to Austin, TX. His father is a project manager for Charles Schwab, and his mother is a business analyst for General Motors.

Early on, music was a big part of his life. Jain began taking piano lessons, but quickly switched to trumpet, which he played in the marching band in high school. “Being in music is a way that I can express my creativity,” he says. “It’s a time when I can put everything aside. It helps me be happy in my own world.”

Jain, a basketball enthusiast, played in a recreational league. He also enjoyed camping and hiking along the way to becoming an Eagle scout.

And “ever since I can remember I was fascinated by science,” Jain says. His grandmother, a zoologist, probably helped spark his interest, he says.

“It has always fascinated me how science breaks everything down into little fundamental pieces,” Jain says, “How you build on all those tiny little pieces. Initially I was fascinated by the concept of DNA, and how one single strand can dictate a whole human. Simply by changing a couple of strands, a couple of little base pairs in someone’s DNA, you can cure disease.”

His grandmother and grandfather battled breast cancer and Parkinson’s Disease, respectively. This further sparked Jain’s interest in biomedical research and medicine. “All I wanted was for them to magically get better. Why was there no cure? It was so unfair for the people who gave themselves so selflessly to their communities to suffer so dearly,” he says.

Open curriculum attracted him to the University of Rochester

Jain chose to attend the University primarily because of its open curriculum and cluster system. “That’s what’s beautiful about the University; it gave me the freedom to really explore what I wanted to, instead of being forced into little boxes,” Jain says. “I was able to take classes that I probably wouldn’t have taken otherwise, classes that I knew would help me in the future.”

A course on the psychology of human sexuality, for example, “opened a lot of doors in terms of things I never really thought about in the past, such as gender, and sexuality,” Jain says. “Taking classes like that will help me be a more accepting person, more open minded as a physician, so that I can properly care for my patients.”

The open curriculum also allowed him to take neuroscience classes, which have strongly influenced his thinking about his eventual career path in medicine.

In addition, undergraduate lab experiences have allowed Jain explore both pure and applied biomedical research. By his junior year, for example, he was working in the lab of biologists Vera Gorbunova and Andrei Seluanov, who are renowned for their studies of cancer-resistance in naked mole rats. A friend working in the lab suggested he email the team “and I was lucky enough to get an opportunity there.” Jain helped prepare viruses with different cancer inducing genes to see what combinations would induce cancer in the mole rats, and how that compared to responses in human cells.

After a year, he began looking for a research experience with direct clinical applications. He joined the lab of Jill Halterman at the Medical Center. Halterman, a professor of pediatrics, is an expert in preventive asthma care, whose partnership with the Rochester City School District and school nurse program has allowed her and her team to improve the delivery of care to hundreds of children and teens with asthma.

Jain interviews patients and caregivers involved in the lab’s ongoing studies, “seeing how their asthma is progressing over time, and we can help them get treatment.” Because of COVID, the interviews are conducted over the phone, rather than in person.

Nonetheless, “it’s going to be a hugely valuable experience for me in the future, working with patients and their caregivers,” Jain says.

This summer, he participated in an REU (research experience for undergraduates) program at Brown University, working in the lab of Anita Shukla, associate professor of engineering. Jain helped synthesize liposomes that can effectively target fungal infections.

Neurosurgery? Emergency medicine? ‘I have a lot to explore,’ Jain says

The first two years of Medical School will primarily involve taking classes. “In the third year you start actual rotations in the hospital, getting a feel for which fields you like,” Jain says. “Then in the fourth year you start honing in.”

For the moment, he is leaning towards neurosurgery. The courses he took in neuroscience, Jain says, “fascinated me, learning how the brain works, and how one small organ can control so many aspects of a human being.”

The suturing skills he’s pick up along the way could serve him well not only in that field, but also working in an emergency room. The shear adrenalin rush of emergency medicine is appealing as well, he says.