Tiana Salomon ’22 learned about the Grand Challenges Scholars (GCS) program during her first year at the University of Rochester.

“I thought it was super interesting to be able to engage with one topic, from so many different perspectives,” says Salomon, a biomedical engineering major from Schortens, Germany. “That really is the future of science.” 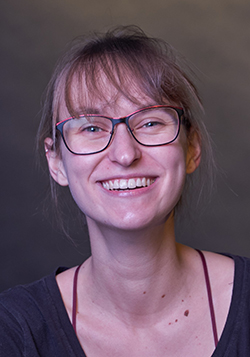 The GCS program invites undergraduates to pick one of 14 “grand challenges” of the 21st century, identified by the National Academy of Engineering, the initial sponsor of the program.

One of the challenges, Engineering Better Medicines, was especially appealing to Salomon, given her passion for learning more about the “complex connections that link life, health, disease, and death.”

Now, as a senior, Salomon appreciates even more the perspectives she’s gained while fulfilling the GCS competencies.

“Having this well-grounded experience is something that will be super, super valuable for me and for my future work,” she says.

From Germany, to Spain, to Costa Rica—then Rochester

“Ever since I was little, I wanted to be a doctor,” Salomon says. “I had a little brother and if he got hurt, I would be the first one on the scene, trying to find out what had happened, how I could help.”

Her favorite subjects in school were the biosciences, chemistry, and math. “Nobody knows where that interest comes from,” she says, “because no one in my family is involved in science.” Even as a young girl, however, Salomon considered science “super interesting,” because it is a source of endless discovery. “There is always something new to learn, and it is the field where I feel like I could have the biggest impact.”

Her father, an officer in the German air force, took his family with him when he was transferred to a base in Spain, then back to Germany again, all before Salomon was in middle school.

Then, at age 17, she decided to leave home to complete her final two years of high school at a United World College (UWC) in Costa Rica.

“It was the first time I was all by myself in different country,” she says. She had to “step out of my comfort zone” to make new friends; to become more proficient in English, which was used in the classrooms; and to accustom herself to a culture “completely different from what I had experience in Germany and Spain,” Salomon says.

But the experience was worth it, she says. The college emphasized the kind of experiential learning that best suits Salomon’s style of learning and allowed her to pursue her passion for biosciences. Moreover, in a totally unexpected way, the college introduced her to the University of Rochester.

Her UWC counselor signed her up for an interview with a visiting Rochester admissions officer—without even telling her until the day before the interview. “So, it was a complete surprise,” Salomon says. By the end of the interview, however, Rochester “just automatically felt right, the kind of place where I could feel at home,” she says.

And that’s exactly what it has turned out to be, Salomon says.

Salomon says she appreciates the University’s relatively small size, which fosters a sense of community “where everyone kind of works together, where I’ve always felt like there was help and support if I needed it.”

Though she has not had time to play clarinet for any of the many River Campus student orchestras and other ensembles, she’s enjoyed being a member and supervisor of the Stage Tech Crew that sets the stage for those ensembles to rehearse and perform concerts. “I enjoy it a lot because besides setting up the stage and livestreaming, I am backstage, listening, every single time we have concerts,” she says. “And some of the shows they put on are just awesome.”

But she’s especially loved the opportunity to “get a lot more hands-on research experience that I don’t think I would have had otherwise, or as easily, at another university.”

For example, the University awarded her a Research and Innovation Grant so she could participate in a summer internship exploring marine biology at Cape Town, South Africa. She worked in the lab of Vera Gorbunova, Rochester’s Doris Johns Cherry Professor of Biology, taking care of the long-lived naked mole rats that have helped the Gorbunova lab make groundbreaking discoveries about the aging process.

Currently Salomon is a research assistant in the lab of Danielle Benoit, professor of biomedical engineering and an expert in developing therapeutic biomaterials for tissue regeneration and targeted drug delivery. Salomon is helping Clyde Overby, a PhD student in the lab, develop new drug delivery nanoparticles. They are adding peptides that enhance the ability of the nanoparticles to reach target stem cells, but at the same decrease the ability of the body’s immune system to interfere.

The research experience that particularly enabled Salomon to fulfill the Grand Challenges Scholar competencies was her participation as team leader for the University’s iGEM (International Genetically Engineered Machine) team. The team designed a novel device that diagnoses sepsis based on biomarkers in a person’s sweat, earning it a gold medal in a championship that involved more than 300 teams from across the globe.

It was great opportunity to work on “different sides of a project,” weighing entrepreneurial considerations and regulatory policies in addition to the science and technology involved, says Salomon. She first pitched the sepsis project to the team, then helped refine it as the team gradually eliminated other ideas.

Using sweat as a diagnostic tool is especially appealing because it is less invasive than drawing a patient’s blood. So, it was important to design the device so it could be used to detect other diseases that can be measured using a patient’s sweat, Salomon says.

“This idea of innovative thinking outside of the box, to design something that is simple, but at the same diverse in its applications, was incredibly important, and one of the most important things I learned,” Salomon says.

Weighing the options: Academia or industry?

Salomon has accepted an offer to pursue a PhD in regenerative sciences at the Mayo Clinic in Rochester, MN. "It is a program I am incredibly excited about and very much looking forward to," she says.

“I know that I want to stay in research,” she says. But she’s still weighing whether to do so in academia or industry. “By now I know the academic side relatively well, especially working in a lab, but I don’t know anything about industry other than what people have taught me or I have heard from others.”

“I really like the flexibility you have with academia, in pursuing what you want to,” Salomon says. “While you are more regulated in what you do in industry, you don’t have to worry about applying for grants. So, both have their advantages and disadvantages.”

See Salomon's poster  describing how she fulfilled the GCS competencies.