Samuel Thomas, at the MIDI, and Marjorie Cuerdo, at the laptop with joystick, complete their performance of Cuerdo’s “City,” a compilation of street sounds that depict fast-paced city life. They performed during a showcase of projects from the Interactive Music Programming class.

As the first snowflakes of a winter storm swirled against the windows of Rettner Hall, Molly Nemer’s “Winterchill” seemed especially appropriate.

Weaving violin, flute, and ambient wind sounds created from ChucK audio programming language, with her own narration from The Kalevala, Finland’s epic poem, Nemer offered an eery, ominous depiction of winter that was both musical and theatrical. She and classmate Alexis Montes (shown at left) performed it with a laptop, wiimote and cellphone.

“Jack Frost, Windblast’s son, icy son of Winter, do not freeze my fingernails, do not demand my toes . . .”

This was one of the projects showcased at an end-of-semester presentation by students in an audio and music engineering class entitled Interactive Music Programming. 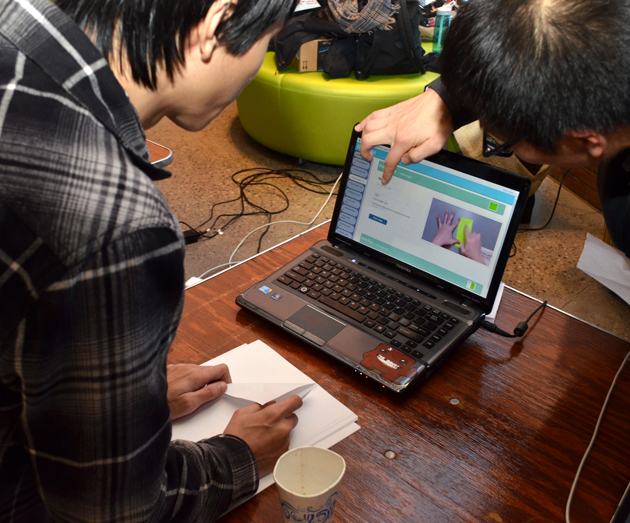 Later that afternoon, teams of students in a computer science course on Human Computer Interaction used the same venue to showcase their projects (see video), which ranged from apps providing instant feedback for public speakers and voice students, to a platform for sharing code, to a “life of the party” light system keyed to the  movements of party goers.  In the photo at left, Ru Zhao, a mentor in the Human Computer Interactions class, tests a “how to” app for learning origami, as  Hua (Francis) Zhou, a senior in Electrical and Computer Engineering and member of  Team Awesome, looks on. The team is developing BabySteps, a user interface for displaying how-to guides.

In the human computer interaction class, taught by Ehsan Hoque, Assistant Professor of Computer Science, and three teaching assistants, students study the theoretical methods for user interface design, look at case studies that augment theory with practical experience, then work in teams to create their own applications.

Both classes, it turns out, are equally popular with non-engineering students and/or students from other departments.

Nemer, for example, is a sophomore in digital media studies who is also pursuing a major in film and media studies. The interactive music programming class, which was offered for the first time this fall, enabled her to take her “first stab at not only designing and coding my own music, but composing it as well.”  These are skills she anticipates using throughout her career, she said.

Montes is a public health major who will begin a teaching job next year with Teach for America, the program that places recent college graduates in under-resourced urban and rural public schools. He’s planning to introduce his students to the same free programming language he used in the interactive music programming class -- perhaps in after school projects, using the students’ universal interest in music as a springboard to interest them in programming as well.

Akira Wong, a member of the CodUR team in the Human Computer Interaction class, is a biological sciences major using his Take Five year to design a website app for a bubble tea shop. The HCI design and user feedback skills he learned will be useful when begins doing lab research in biological sciences at the Medical Center next year, he added, where he hopes to design an app to help lab technicians multitask among various projects.

“This class was very useful in terms of designing applications for users to interact with each other, in ways that make their lives easier.”

Hoque says it’s an advantage that half or more of the seats in his class are filled by students who aren’t computer science majors.

“You learn the most when you work with people who are different from you,” Hoque says. “The students who are non-CS majors bring a very different perspective.”

Referring to the teams gathered around their posters, he noted that “as you walk around, you will see that on many of the teams there no more two computer science students.” A typical composition of any team includes a design/studio art major, a couple of computer science majors, and perhaps, a non-computer science major who brings domain expertise to the problem being solved, he added. “This simulates what a real world project team may look like. ”

The experience of working in multidisciplinary teams may be as important for these students in their later careers, as the specific programming skills they’ve learned. “When you’re working with four or five people, there are difficulties, there are issues that come up, and you have to resolve them,” Hoque said. “In addition, you also learn how to communicate a technical idea to a non-technical audience. 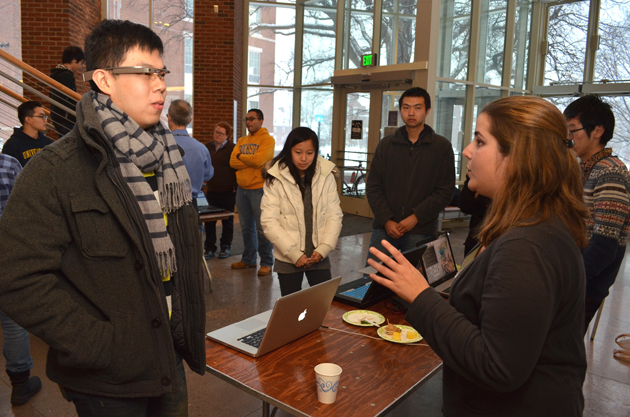 Akira Wong, a member of the CodUR team in the Human Computer Interaction class, puts on glasses to check out a speech feedback app developed by the ROC Glass team for use with Google’s wearable technology. The app provides live feedback for speakers to moderate how loudly and quickly they are speaking. ROC Glass team member Sarah Eldehni, an Engineering Science senior, is at right.