'Keep pushing yourselves,' grads are urged 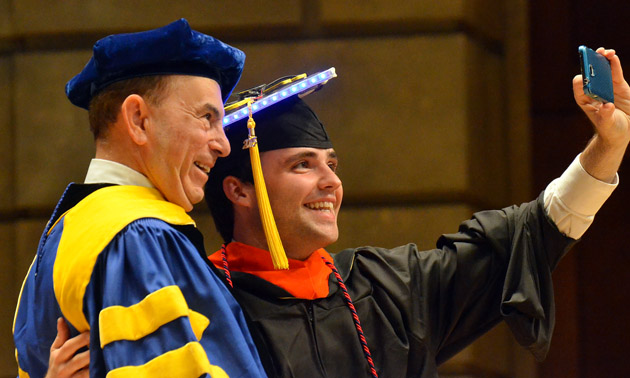 (Laptop orchestra founder David Heid takes a selfie with Edmund Hajim, chairman of the University's board of trustees, after receiving his master's diploma from Hajim at the Hajim School diploma ceremony in Kodak Hall.)

When Richard Rashid ’77 (MA), ’80 (PhD) informed his parents he had changed his mind about which graduate school to attend, they seemed quite supportive.

Only later did his father inform him that, in fact, they thought Rashid was making the worst mistake of his life, deciding to enroll in a brand new graduate program in computer science at the University of Rochester, rather than pursue an advanced degree in mathematics at Berkeley. 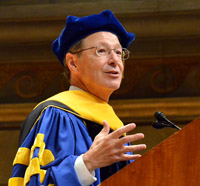 His parents “had never seen a computer; they had never heard of a computer,” Rashid told Hajim School graduating seniors and masters students at their diploma ceremony in Kodak Hall yesterday.
“From their perspective, underwater basket weaving probably seemed like a more marketable skill.”

In fact, Rashid’s training in computer science propelled him on an illustrious research career in artificial intelligence, operating systems, networking and multiprocessors.  Founder of Microsoft Research, he is now chief technology officer of Microsoft’s Applications and Services Division, and a member of the American Academy of Arts and Sciences.

To be sure, Rashid was risking a lot, attending a computer science program that:  1. had only three faculty members – only one of whom had held a PhD longer than six months. 2. had only eight students. 3. Did NOT have a computer ( the faculty and students had remote access to a computer at Stanford)!

And yet, within a year, the UR program was the only other site in the country with access to Xerox’s first personal computers. It transformed the program into one of the best in the country,  and it propelled Rashid on his way.

This was not the only risk Rashid took in his career.

When he joined Microsoft in 1991, it was still a small start up; his best friend and a close mentor were both skeptical and turned down offers to join him in the fledgling research group Rashid was establishing there.

He has applied the same risk-taking approach in his personal life. He learned to ski black diamond slopes in his 40s; learned to ride horses and participate in 50-mile horse races in his 50s. When he turned 60, he learned to fly airplanes and began running in marathons.

“I’ve always tried to push myself, he said.

And that was his advice to Hajim School graduates as well. Keep pushing yourself, not just in your career but in your life. . . Don’t be afraid to fail… But be defined by your successes.

When he got married, Rashid related, his wife marveled at how often he could find the best parking spaces.

“I just always assumed there was a space up there for me,” Rashid explained. “Surprisingly,  there are a lot of good places up front if you just go looking for them.”

What’s true in parking lots, is also in life, he concluded.

“If you want success, it’s out there -- if you actually look for it, and are willing to take a risk to find it. And don’t feel bad if it doesn’t work out. Just try again.”

(Below, Barbara Dick, Administrative Assistant and Academic Coordinator in the Department of Electrical and Computer Engineering, with David Porter, left, and Kedar Shashidhar, recipients of audio and music engineering degrees.) 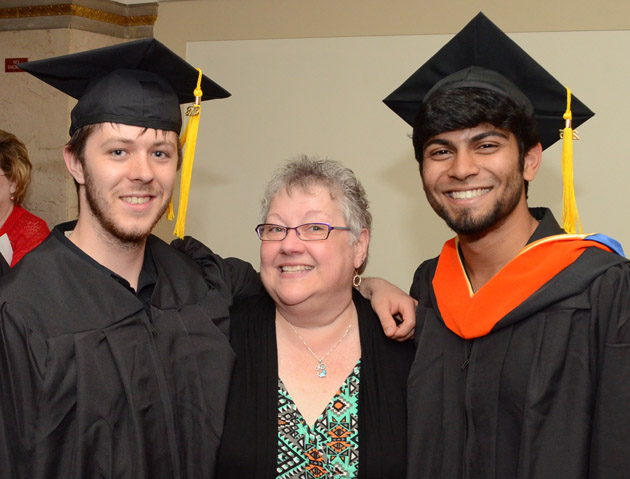