Students step up to organize e-social 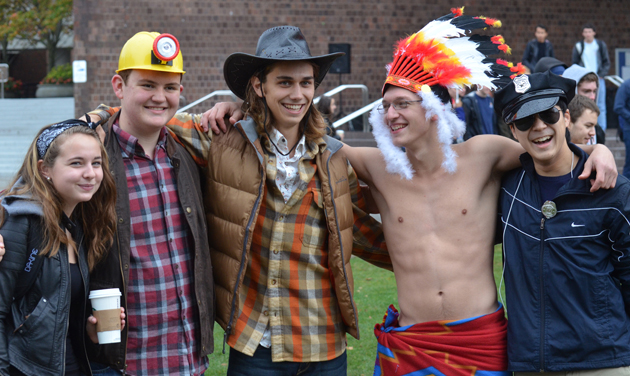 (ChemE sophomores Megan Whalen, Dean Smiros, Will Porter, Vito Martino, and Aaron Jo won the team spirit award for their efforts on behalf of AICHE at the pumpkin launch.)

Oct. 31, 2014: “Fire in the hole,” hollered Jordan Brooks, a MechE senior with the Robotics Club, as he prepared to propel a pumpkin from an air cannon with 40 pounds per square inch of pressure.

Moments later the pumpkin arched high over the Wilson Quad, before exploding into fragments when it finally hit the ground about 300 feet away.

The ooohs and aaahs that emanated from dozens of on looking students – many in Halloween costume – clearly indicated they were eager for more.

This fall’s Hajim School pumpkin launch and e-social, held on Halloween Day, marked the first one entirely organized by students in the school’s engineering societies.

The Hajim School has organized three e-socials each year. However, with enrollments now double what they were just eight years ago, the school wants its staff to focus on core student needs and services, including advising and student retention. Thanh Huynh, president of American Society of Mechanical Engineering chapter, proposed that the engineering societies take over the fall event. When the club presidents met at a dinner hosted by Pedro Vallejo-Ramirez  and Koji Muto, presidents of the Optical Society of America and Tau Beta Pi chapters respectively, the idea was well received.

“The proposition was simple,” Muto said. “The Hajim School would provide the funds, and the students would do the rest.”

One-year-old Rettner Hall, where pizza, music and pumpkin carving were also offered, provided a warm, dry, well-lighted haven from the dreary weather outside.

Even spots of drizzle and light rain, however, could not dampen the enthusiasm of seven teams of pumpkin launchers and their supporters. The equipment included air cannons and trebuchets. Each of the seven teams – including two from nearby Rochester Institute of Technology -- had four attempts to choose a distance, and see how close they could land their pumpkin to the marker.

With Solar Splash and Robotics Club deadlocked at 50 points after four rounds, it all came down to a one-shot playoff for the top prize. 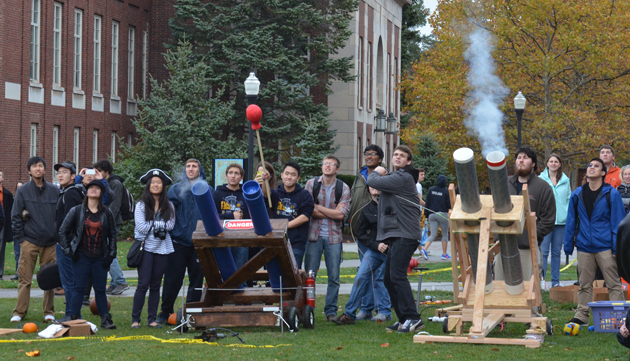 (The Solar Splash team at left squared off against the Robotics Club in a shootout for the top prize.)

They fired their cannons simultaneously and, moments later, the Solar Splash Team and its supporters were engaging in high fives.

By that time, teams of pumpkin carvers were finishing up inside Rettner. A trio of BME sophomores – Janet Sorrells, Marina May and Claire Kaiser – took the prize for best design.

Twelve engineering society chapters and URTV were each responsible for a particular aspect of the e-social. The National Society of Black Engineers chapter, for example, was responsible for the pumpkin-carving contest.

“It was a little bit hard, working with so many different groups, but in the end it turned out really well,”  said NSBE co-president Aurelie Roche, a junior in ChemE. “So we’re happy about that.”

“We had a big turnout, and everybody had fun,” added NSBE copresident Farid Adenuga, a junior in MechE. “We’re looking forward to having more of the same next year,”

The students’ efforts did not go unnoticed.

“It was fantastic,” said Lisa Norwood, the Hajim School’s assistant dean for undergraduate studies, of the e-social. “The turnout was great. The interactions were great. I thought the students did a fantastic job of pulling it together.”

“We reached out to a lot of clubs,” Huynh said. “We’re all one team – one engineering family.”

Click here to see a photo gallery of the event.

(BME sophomores Claire Kaiser, Janet Sorrells and Marina May won the prize for best design in the pumpkin carving contest.)

To learn more about the sponsoring societies, go to:

Engineers for a Sustainable World (ESW)