(Students converge on the ASME chapter's Box Derby Cars competition at the Hajim School's student-run Engineering Olympics e-social. Click here to see other photos of the event by Brandon Vick/University of Rochester).

These were among the activities organized by student engineering society chapters for the Hajim School's second student-run e-social -- the "Engineering Olympics" held on March 27, 2015 in the Munnerlyn Atrium of Goergen Hall. Students were free to compete in teams and tackle different engineering challenges to score points and win awards. As with other E-Socials, it also provided an open opportunity for students and faculty to network with each other while enjoying food and drinks. (Click here to see a video of the e-social.)

Twenty teams of students competed. The winners were:

After the success of the first student-run E-Social -- the Halloween E-Social with the ASME Pumpkin Launch and NSBE Pumpkin Carving Contest -- representatives of the University's student engineering society chapters decided to form an official E-Social Committee, which organized the spring event. 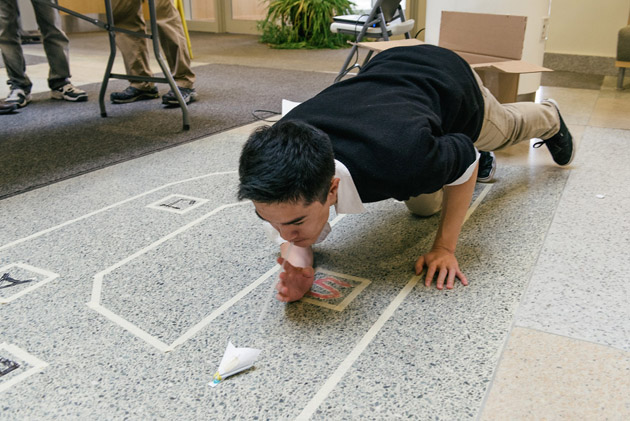 (Oscar Ta '18 BME, a member of the Baja SAE team, tests blowing his racecar around the rubber band racing track.)

The other groups that were heavily involved in the planning process but did not have an activity were: Society of Women Engineers (SWE), prizes; National Society of Black Engineers (NSBE), event support & reservation; IEEE, publicity; and Biomedical Engineering Society (BMES), food catering.

"We started planning at the very beginning of the Spring semester and the entire committee met bi-weekly. Every organization was either in charge of a planning portion, such as event support or prizes, or held an activity. Every representative really pulled through and I believe they all deserve some recognition. We will be continuing this exciting new tradition of student-run E-Socials under the leadership of Vito Martino, the elected President of the E-Social Committee for the next academic year, " said E-board President Koji Muto '15 MechE, president of Tau Beta Pi.

The rest of the committee members were: