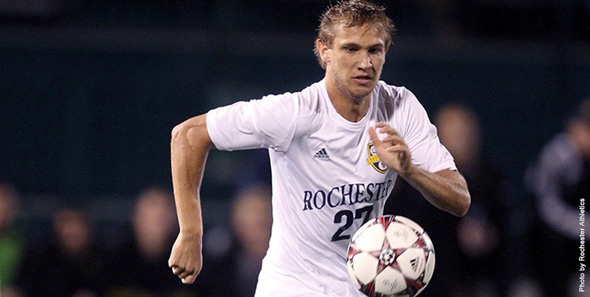 (Ben Keeton '16, a UAA All-Academic team member, is one of 13 Hajim School students on the roster of the UR men's soccer team, which has compiled a 15-2-2 record and has qualified for the Sweet 16 round of the NCAA Div. III men's soccer tournament.)

Nov. 18, 2013: The UR men's soccer team is advancing to the Sweet 16 this week, and Hajim School engineering students, who comprise 40 percent of the team's roster, have played a big part in the team's success.

The Yellowjackets, who have compiled a 15-2-2 record, advanced past the second round of the NCAA Division III men's soccer tournament for only the third time in the program's history with a 3-0 win over Oberlin College on Sunday. 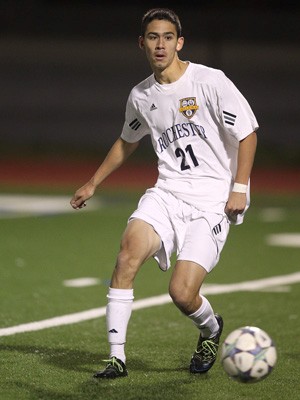 Hajim School students were involved in all three scores. Max Fan '14, a Chemical Engineering major (shown at left), scored the first goal off a breakaway pass from Jeff Greblick '17, a student in Biomedical Engineering.

Fan then supplied the primary assist on the second goal, to Shane Dobles '15, a Mechanical Engineering major.

Jarvis D'Souza '15 of Biomedical Engineering then assisted on the final goal.

With Alex Swanger '15 (Economics), the team's second leading scorer, not playing, "we needed guys to step up," said Fan, who also scored a goal in a 2-0 win over SUNYIT the night before.

Four of the team's top five scorers this year are engineering students. Greblick, named UAA conference Rookie of the Year, leads with 28 points. Dobles is third with 14 points; Keith Grafmeyer '15 of BME has 12 points and Fan has 11. They have scored 23 of the team's 54 goals this year, 9 of them game winning.

Hajim students have been well represented in UAA conference athletic and academic awards in men's soccer this year.

The UAA All-Academic Team, named earlier this fall, included J.C. Billone '14 of BME, D'Souza, Dobles, Ben Keeton '15 of MechE, and Evan Sosnow '16 of BME.  To be eligible, the student athletes are required to have completed at least one year of college with a 3.3 cumulative GPA.

Other engineering students on the team's roster are Braden Adcock '14, Tyler Buck '16, and Nick Pastore '15 from MechE, and Marshal Davidson '16 of BME.