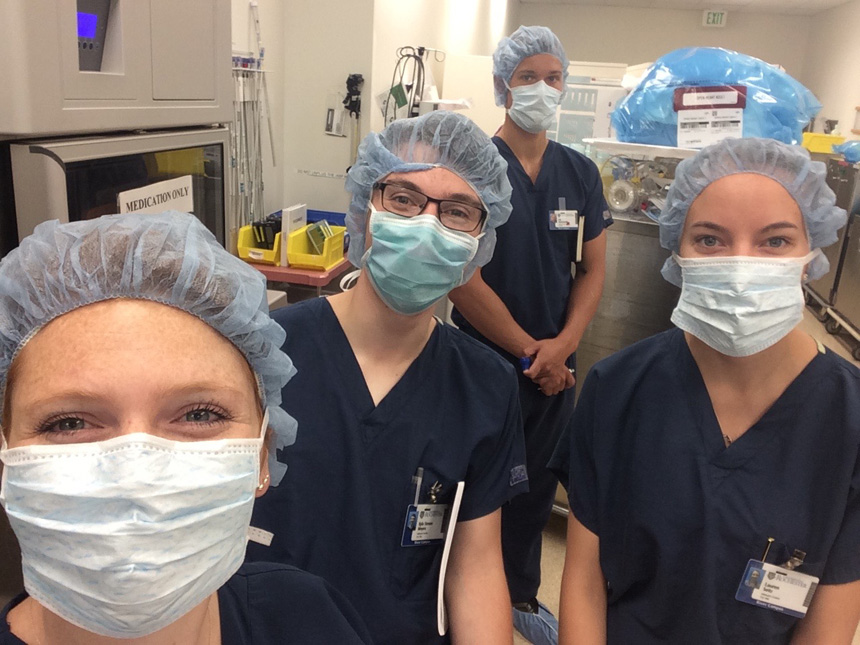 From left to right, Margaret Ferrari, Kyle Meyers, Ian Baranowski, and Lauren Seitz pose for a selfie before entering an operating room.

Learning by being there: In the operating room

“One day we’d switch from seeing open chest surgeries to going to fluoroscopy labs, and having to put on lead vests so we wouldn’t absorb the radiation when they were trying to image a balloon going through a patient,” Baranowki says.

Immersion in clinical settings is a hallmark of Rochester’s Center for Medical and Technology Innovation master’s program in device design. Thanks to the close proximity of the University’s Medical Center to the River Campus, it is a unique opportunity for budding engineers to learn firsthand — from surgeons, nurses and other clinical staff — what could be done to improve medical tools and processes.

Not only that, the students get a clearer understanding of how the actual constraints of an operating room or lab must be factored into the solutions they devise.

Baranowski, Ferrari, Meyers, and Seitz — who are refining a device for use in mitral valve replacement surgery — are one of three teams of CMTI students finishing their design projects this spring. The projects are a culmination of a year of rigorous design, market analysis, and instruction in FDA approval processes and intellectual property law.

But all of them started with clinical immersion.

Becoming part of a ‘well-oiled machine’

For Baranowski, Ferrari, Meyers, and Seitz — the cardiovascular team — this sometimes meant standing a mere two or three feet away from a patient undergoing open heart surgery.

“The first day we felt a little out place,” Meyers says, “not knowing where to stand, what to avoid touching, and above all wanting to be respectful to the patients and the process that was going on.”

“At the beginning we were standing at the edges of the room, next to the walls,” Seitz adds.

But the students quickly gained the trust of the operating room nurses, and learned to fit into the “well oiled machine” of an operating room. They learned the opportune times during open-heart surgery to talk to the perfusionist operating the heart-lung machine, for example, or to pick the brains of the industry rep guiding a surgeon in the use of new device.

“The surgeons would often redirect the camera so we could see what they were looking at,” Baranowski says.

“It’s really beneficial to be doing this at a teaching hospital that already has surgeons committed to teaching students and helping out on projects that advance medicine,” adds Ferrari.

The students worked particularly closely with Peter Knight, the Marjorie B. Morris Endowed Professor in Cardiac Surgery, and Fabio Sagebin, a cardiothoracic surgery resident. “They were always willing to meet with us,” Ferrari says.

Knight says he’s “enthusiastic about working with the students as they provide an opportunity to get a fresh unbiased look at what we do. Our specialty is in need of novel solutions to old problems. “

Each day the students kept a log of the procedures they witnessed and a list of the “pain points” associated with each.

During the fall semester they began whittling down a list of 150 to 200 possible projects, by researching the market, examining existing patents, and “trying to figure out where there was an opportunity for us to get our hands dirty,” Meyers says.

“It’s a tricky process. Because the FDA (Food and Drug Administration) is involved in regulating medical devices, you want to be able to tell them your device is similar enough to what’s already on the market, so you don’t need a lot of testing. But it has to be different enough to merit a patent.”

By October, team members had narrowed the list to six possibilities, which were reviewed during a two-hour presentation in front of a group of investors, CEOs from device companies, and staff from UR Ventures, the University’s tech transfer office.

After hearing their feedback, the team was ready to embark on the project that is now nearing fruition.

Mitral regurgitation is leakage of blood backward through the heart’s mitral valve each time the left ventricle contracts. This can result in congestion around the heart and lungs, atrial fibrillation (a condition in which the atrium pumps rapidly and erratically), even heart failure.

Traditional surgery to repair or replace a mitral valve requires opening the sternum, Ferrari explains. Knight, however, prefers a less invasive approach through the side of the chest.

Even with this approach, however, a key challenge remains. “With the patient on coronary bypass, there’s essentially no blood in the heart,” Ferrari explains. “The atria deflates and falls on top of the mitral valve.”

So even with Knight’s approach a second opening has to be made in the chest wall to insert a plate that helps hold the atria up so surgeons can see the mitral valve. And this too has its shortcomings. The plates often have to be adjusted throughout the surgery.

The team’s solution avoids the need for that second opening. They have come up with a device that can be inserted through the opening in the side of the chest, then deployed in a way that holds the atrium up, giving surgeons a better look at the mitral valve. It also allows them to work through the middle of the device.

“It’s a very small space,” Meyers says. “There’s a lot going on. They’re working with tools already 6 to 8 inches long in the middle of the person’s chest, so we have a lot of environmental factors that play a role here.”

“This is what excites us to be medical engineers — to get to learn this crazy cardio vascular plumbing system, and take into account a lot of mechanical aspects as well.”

“It is really exciting stuff.”

(The device that the team developed is now being reviewed by UR Ventures, the University’s tech transfer office, for a possible patent.) 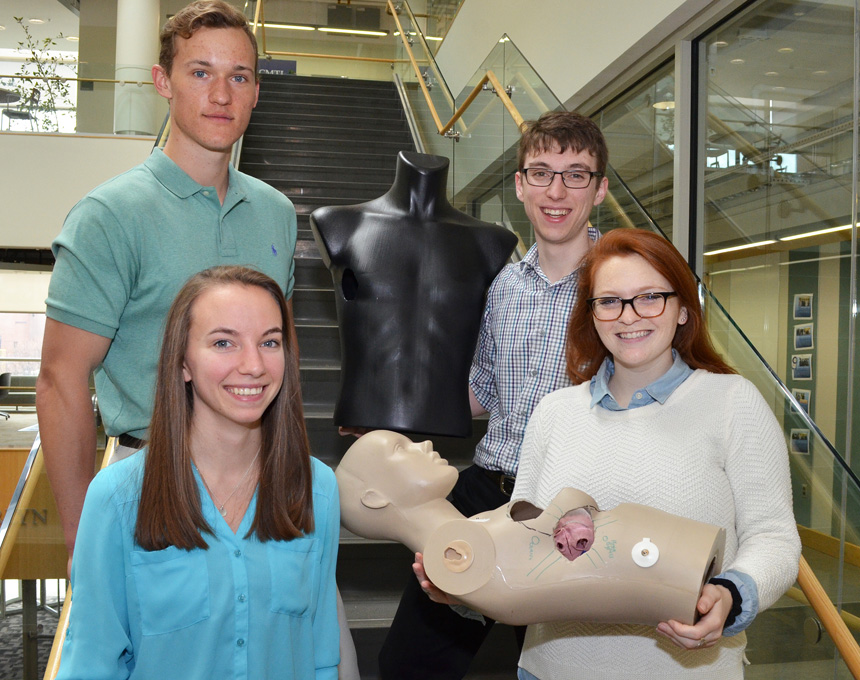