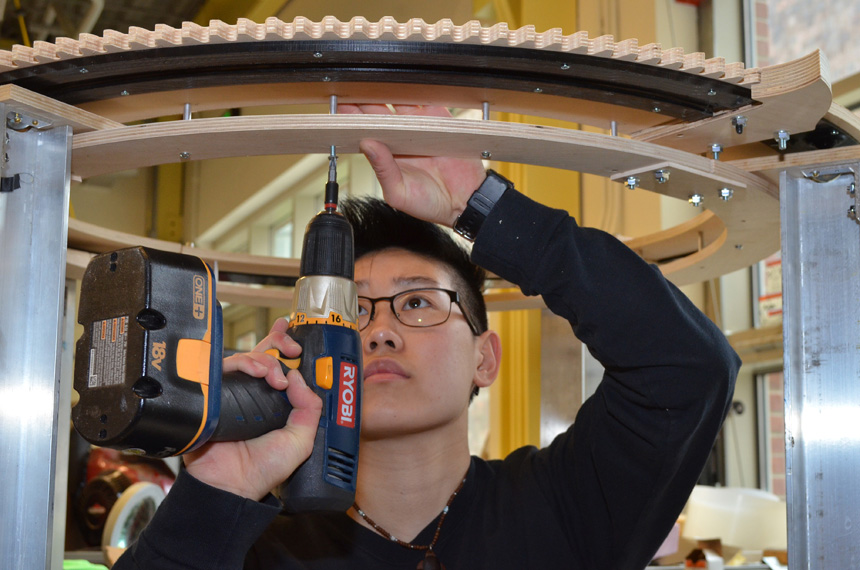 Catherine Yip of mechanical engineering helps assemble her team's prototype showing how lenses would be housed, tilted and rotated for a "periscope" envisioned by New Rochelle artist David Krinick. (Photo by Bob Marcotte/University of Rochester)

‘Doing it is a lot different than learning it’

“Ideas for senior design sometimes come out of the blue,” says Professor Wayne Knox, who supervises the projects at The Institute of Optics.

That was certainly the case when David Krinick, a community artist in New Rochelle, New York, contacted Knox last summer about erecting a 70-foot-tall, submarine-like periscope in the town’s square.

Krinick, a University alumnus who founded Mesh Print Studio, wants everyone in the community — not just those fortunate enough to live in the upper lofts of the town’s largest buildings — to enjoy a view of Long Island Sound, 1.2 miles away. He also specified that the periscope should be completely analogue — no electronics, no motorization.

As is often the case with unusual requests like this from nonengineers, Knox considered this from four angles. “At first you think ‘that sounds cool’ . . . then ‘no, that’s ridiculous’ . . . to ‘it might be possible’ . . . and finally ‘this could actually have educational benefit.”

Chris Muir, who teaches senior design in the Department of Mechanical Engineering, concurred.

As a result, teams of students from each department have been working in tandem to demonstrate how the New Rochelle periscope really could be built.

To start, a patent search 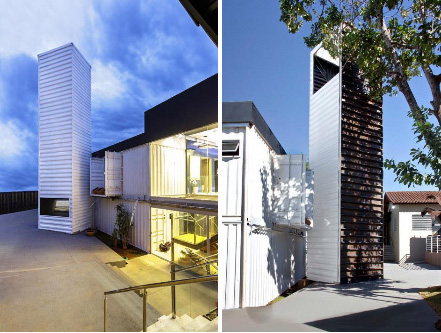 Then they came across something intriguing. “We randomly found it online one day,” Smith says. A shipping container — like the ones that can be used interchangeably to haul cargo on ships, trains and trucks — was set on its end in South America. It was adapted to house two large mirrors — to get a better view.

The team concluded a similar approach could be applied in New Rochelle. Two highly reflective mirrors could be vertically positioned 70 feet apart, at 45 degrees respective to each other, “allowing the image collected by the top mirror to project onto a second mirror at ground level that many people would be able to see,” Smith says.

But how would it be housed?

The “MechE” team of Catherine Yip, Michael Kaplan, Carolyn John, and Hiroyuki Asaga have answered that question with a design that accommodates two mirrors up to six feet across, plus mountings for the mirrors and mechanisms for rotating and tilting them. 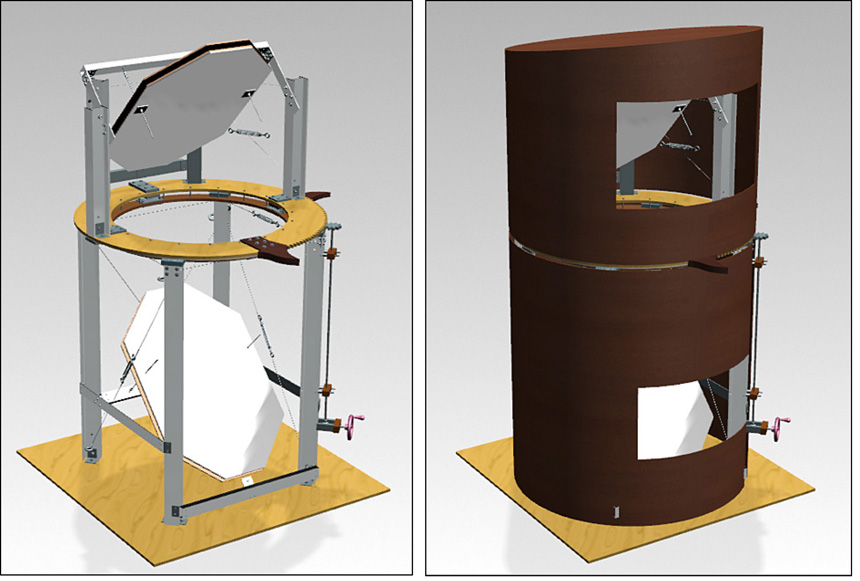 The MechE team came up with these CAD drawings for the prototype they plan to display on Design Day. 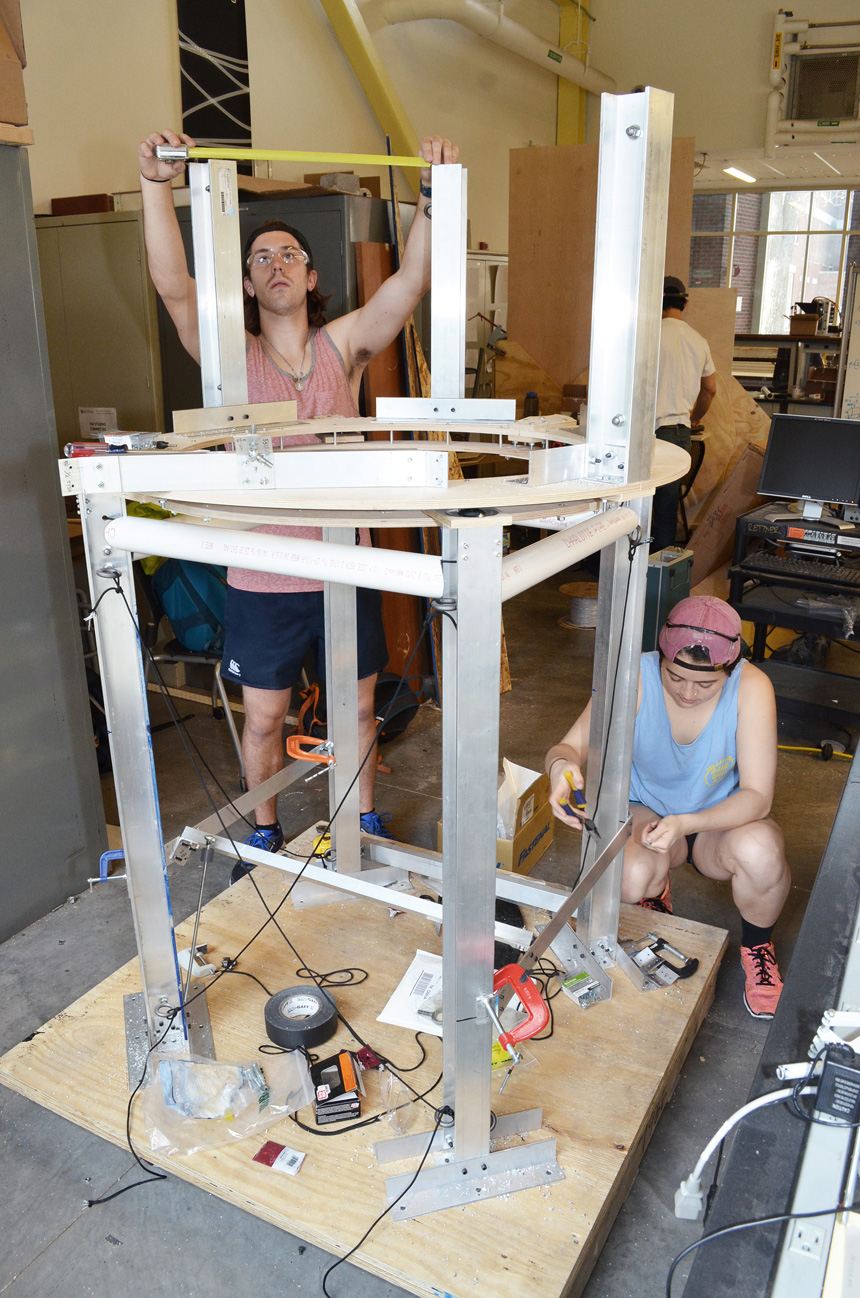 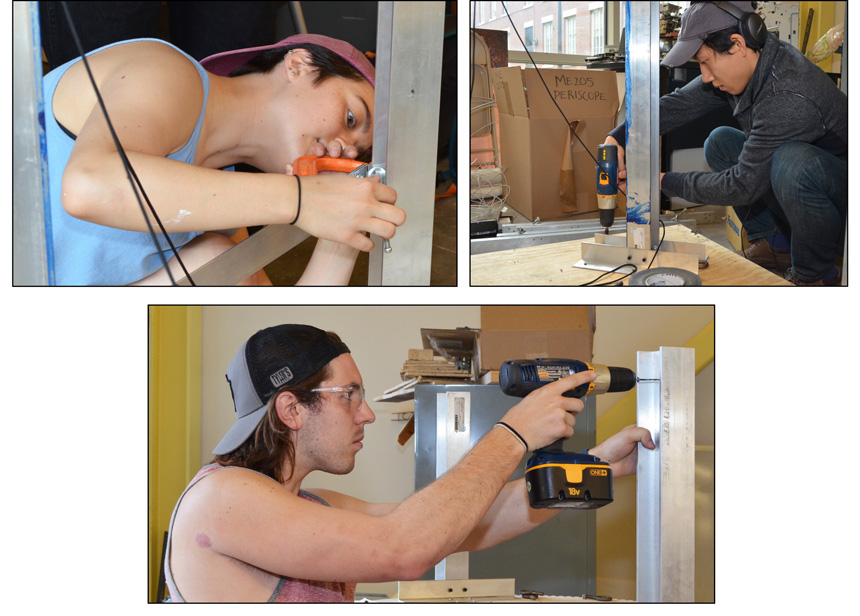 Carolyn John (upper left), Hiroyuki Asaga, and Michael Kaplan (below) joined Yip in fabricating the parts and assemblying them. (Photos by Bob Marcotte/University of Rochester)

The team is fabricating a seven-foot prototype to display on Design Day. It’s not exactly to scale. The mirrors are only three feet across. Otherwise, the mirrors would be only six inches in diameter – “which wouldn’t provide an accurate depiction of what we’re trying to accomplish with the mechanisms we’re using to rotate the periscope and adjust the mirrors,” John says.

In the meantime, the Optics team has come up with two other options. One replaces the bottom mirror with a telescope, to allow magnification. The other would look much more like the typical submarine periscope seen in the movies. It would consist of a relay system of small five-inch lenses placed inside a PVC pipe 70 feet tall.

“Originally we thought (this option) would never work; our professors thought it would never work,” Smith says. Why? Lenses bend light as it passes through them. Too many lenses, it was thought, would be needed to keep bending and re-bending the light to keep it focused along a 70-feet length.

“We got it down to eight lenses, with an objective at the top and an eyepiece at the bottom,” Smith says.

And their simulations say it should work.

A 'perfect example' of interdisciplinary teamwork

It’s not clear whether the New Rochelle periscope will ever be built.

But the project has served an important purpose. It gave the students a challenging problem to apply what they’ve learned in the classroom.

“A ton of it,” Smith says. “All of the classes we’ve taken were useful.”

But it also opened their eyes to things that can’t be learned in a classroom.

“None of us had experience with a structure this large, or one using optics,” says John of the MechE team. “So we had to figure it out as we went.”

“I don’t think we realized how much time it would take for the full design to come together,” Yip adds. “I think we have a better idea of that now.”

In other words, “Doing it is a lot different than learning it,” Smith says.

Knox is especially pleased that teams from two different engineering disciplines were able to work in parallel in different aspects of the same project, which he would like to see happen more often. After all, that’s what engineers do in the real world.

“This is a perfect example of really needing to do interdisciplinary senior design.” 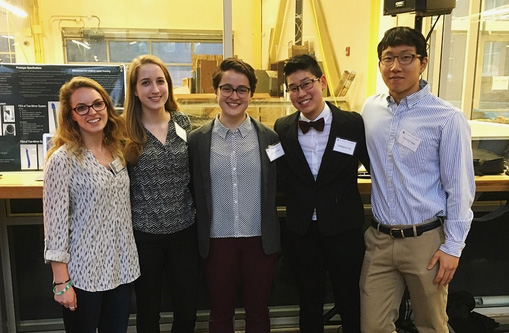 From left to right: Katherine Smith and Yvonne Bodell of the optics team, and Carolyn John, Catherine Yip and Hiroyuki Asaga of the mechanical engineering team.