Engineering, sports contributed to her success in innovation

“I’m energized by innovative ideas and passionate teams,” says Jeanine Hayes ’92, who has spent her career at the intersection of legal, technology, and business. Hayes, the 2018 recipient of the Hajim School Distinguished Alumnae Award, attributes her background in engineering and playing sports to her success in leading teams and scaling innovative ideas at Internet start-ups and iconic global companies, such as Yahoo! and NIKE. 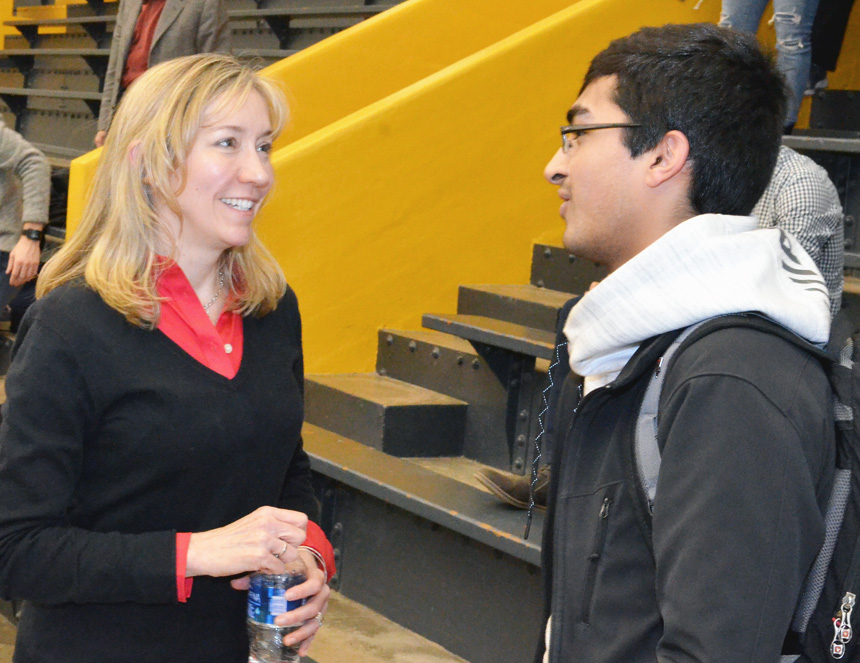 Currently vice president of innovation at NIKE, Hayes received her bachelor of science in optics and played sports as an undergraduate at the University of Rochester. Engineering, she explains, taught her critical thinking and problem-solving skills. “You get comfortable not having answers to everything and having to ask questions and figure things out,” she says. Sports – soccer and track – taught her discipline, the importance of teamwork, and how to “manage set-backs and keep going,” she says.

Hayes started her career as an intellectual property (IP) attorney in Los Angeles after receiving her law degree from Loyola Law School.  While representing clients across multiple industries of technology, entertainment, and consumer products, Hayes gained a broad view of how companies innovated and managed their businesses.

Hayes joined Yahoo! when the company acquired Overtures Services, a technology start-up where Hayes held expanding roles in IP, litigation, licensing and eventually general counsel.  Her early experiences in wearing many hats at Overture -- a pioneer in internet search advertising -- afforded Hayes the opportunity to be part of the business, helping solve issues to accelerate the company’s growth.

“I’ve always worked hard at what I’m doing, but I’ve also been fortunate to work with great teams and been given some unique opportunities along the way,” says Hayes, who thrives in fast-paced and innovative environments.  As vice president and deputy general counsel at Yahoo!, Hayes oversaw all aspects of the company’s global IP programs and was a member of the company’s deal teams, which was involved in dozens of acquisitions and the formation of Yahoo!’s joint venture partnership with Alibaba – China’s largest e-commerce company.

When NIKE called in 2011, Hayes saw it as a unique opportunity to be the company’s first chief IP officer and create a next generation program for one of the world’s most valuable brands.  Hayes worked across innovation, marketing, and business teams in managing the company’s global IP assets, with highlights including litigations that reached the Supreme Courts of the U.S. and China, and overseeing Jordan Brand Legal.

Hayes’s latest pivot came when she was tapped to run the company’s first open innovation program -- the NIKE Ease Challenge.  What started as an innovation initiative for making shoes easier to get on and off, developed into a broader strategy that Hayes was soon incubating as an emerging business platform.  Hayes leveraged universal design principles to create more hands-free and accessible products. By doing so, she was “getting to the opportunity to build a start-up within a branded company to make more inclusive product that enables people of all abilities to be more active” – an exciting growth opportunity with a worthy mission.

Growing up in the Greater Rochester area, Hayes views the University and the region’s innovative and progressive history as having a notable influence on her.  Stories of invention from George Eastman and social advocacy of residents like Susan B. Anthony and Frederick Douglass, were part of the backdrop to her formative years.  But she credits her grandmother with instilling in her the importance of education, determination, and believing that “there wasn’t anything I couldn’t do.”

Hayes maintains close ties with the University and views it as providing a great foundation, experience, and community.  She currently serves on the Dean’s Advisory Committee for the Hajim School of Engineering and Applied Sciences and, whenever possible, seeks opportunities to mentor and promote students, particularly women in STEM.