‘You are only limited by the scope of your imagination’ 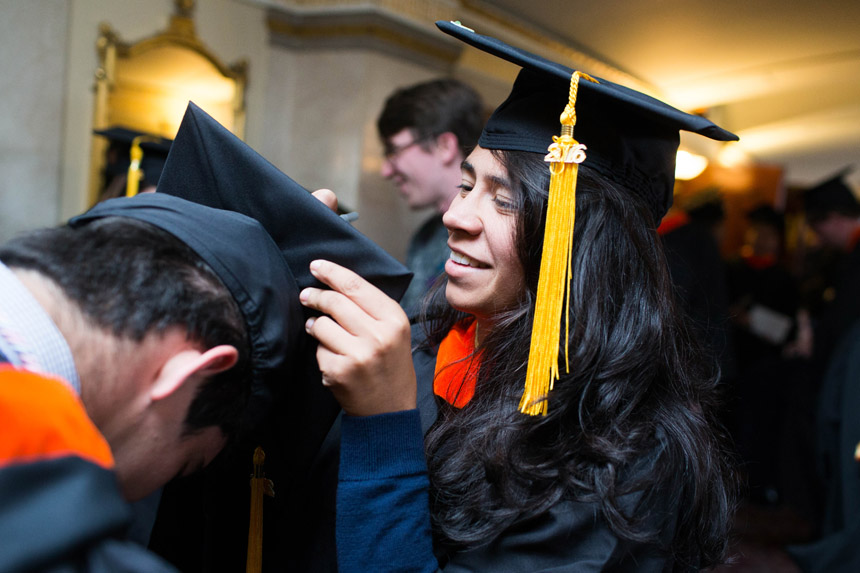 Graduating senior Luisa Neves of Computer Science fills out her information card on top of a friend's mortarboard before yesterday's Hajim School diploma ceremony. (Photos by Keith Walters/University of Rochester.)

Members of the Hajim School’s Class of ’16 passed a final test from their departing dean with flying colors at yesterday’s diploma ceremony -- and then were assigned some final homework by the chief benefactor of their school.

Holding up a t-shirt with the words "May the" and "be with you" placed above and below an equation, Dean Robert Clark quizzed the graduates:

“If we take the first derivative of velocity with respect to time, what do we get?”

“If we multiply that by mass, what do we have?”

“This shirt says what?”

“MAY THE FORCE BE WITH YOU.”

Robert Clark, Dean of the Hajim School, quizzes students on the equation, then presents the t-shirt to Edmund Hajim.

With that, Clark presented the t-shirt to Edmund Hajim, whose $30 million gift to the school eight years ago was the largest in University history. Hajim, who stepped down last week as chair of the University Board of Trustees, routinely includes the famous Star Wars quote in his commencement speeches.

His assignment for this year’s graduates: “Write down a couple of lines you might want to follow the rest of your lives.”

The lines on his own “wall of life,” he told them, are:

Hajim and Clark, who steps down as Hajim School dean to become the University’s Provost on July 1, were lauded as the two “heroes of the day” by University President Joel Seligman for making possible the “extraordinary progress” of the Hajim School during the last eight years.

The school has more than doubled its undergraduate enrollment to more than 1,750. Three-hundred and forty seniors were eligible to receive diplomas yesterday. The school has added new programs such as audio and music engineering and a required class in networking skills, put a high priority on study abroad, and recently won a University Meliora Award for its efforts to retain low-income, first generation and underrepresented minority students with its STEM-Gems program.

Wendi Heinzelman, currently Dean of Graduate Studies for Arts, Sciences and Engineering, and Professor of Electrical and Computer Engineering, will become the new Dean of the Hajim School on July 1.

“You are among some of the most fortunate university graduates globally, and the reason is you have focused on an education that’s going to allow you to tackle many of society’s grand challenges,” Clark told the graduates. “You will create and design an alternative future. Unlike others, you don’t need to wait for someone to invent something to meet your personal needs. You have all the tools necessary to do that yourselves. Your training as an engineer, computer scientist or applied scientist will enable you to define the future as opposed to simply accepting it or hoping someone will create it for you.”

As he does each commencement, Hajim repeated the four “p”s that can provide a framework for graduates to find their future path:

“What you have already accomplished fully qualifies you for almost anything you want,” Hajim told the graduates. “You are only limited by the scope of your imagination and the hard work you are willing to do.” 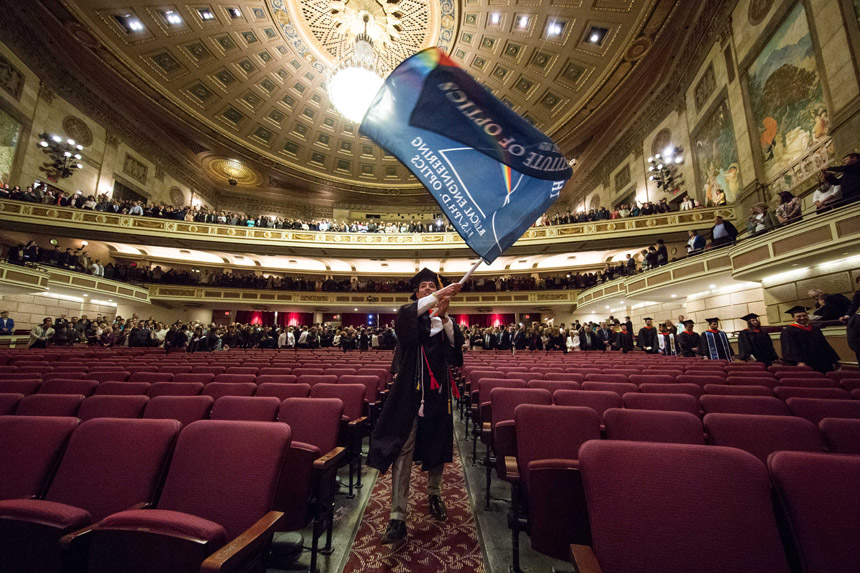 Pedro Vallejo-Ramirez carries the banner of The Institute of Optics as he leads the Class of '16 into Kodak Hall at Eastman Theater.