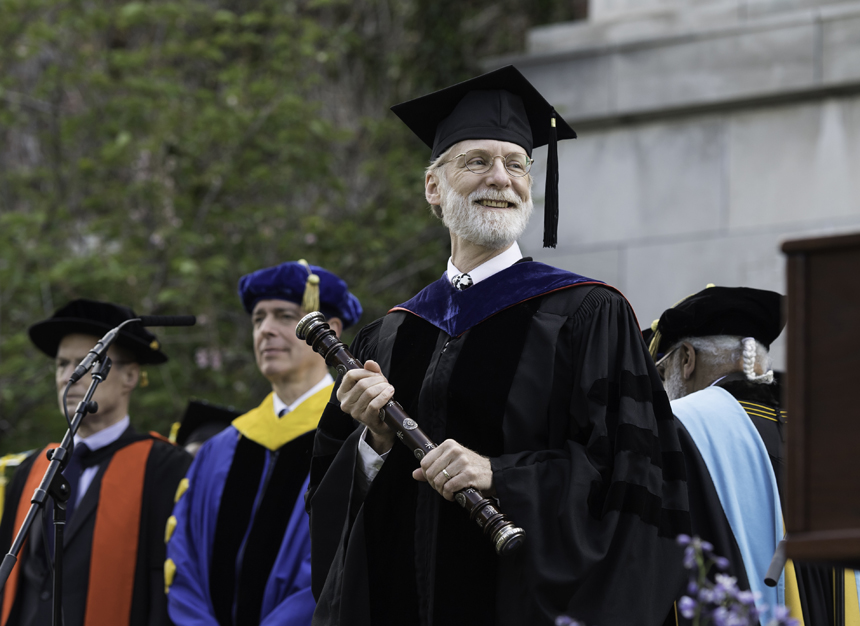 If you look at the 33-year career of our award recipient, at the University of Rochester, you will see a faculty member who has excelled in all of these areas.

Let’s take a closer look at what Michael has achieved in each of these three areas.

In 2001, Michael received the Robert and Pamela Goergen Award for Distinguished Achievement and Artistry in Undergraduate Teaching. Michael regularly gets glowing comments on his teaching style in the questionnaires students fill out at the end of each semester. Department Chair Sandhya Dwarkadas says she admires how Michael uses the board rather than slides during his lectures. This is an increasingly lost art – but it allows Michael to dynamically organize his presentation in order to ensure a smooth flow. As Sandhya notes: “He has the ability to abstract a problem and explain it at successive levels of detail, so that students are able to grasp not only the intricacies of the proposed solutions, but also the motivation behind them.”

Most recently, Michael created and has been teaching a course on the social implications of computing. This is very timely and puts us well ahead of the curve of what other computer science departments are doing; they are all just now starting to get into this subject area and realize its importance.

Michael’s research has been widely cited and is well known around the world. It focuses primarily on systems software for parallel and distributed computing. He is best known as a co-creator of the MCS mutual exclusion lock and as the author of Programming Language Pragmatics, a popular textbook on programming language design and implementation now in its fourth edition. It is one of the definitive references in the field — and is one of two most widely used for the courses that teach this topic.

Several algorithms from his group have been incorporated into the standard library of the Java programming language that we use every day.

Michael is a fellow of the Association for Computing Machinery and the Institute of Electrical and Electronics Engineers (IEEE) and a recipient of the 2006 Edsger W. Dijkstra Prize in Distributed Computing.

These are all significant achievements in and of themselves, but in addition, Michael has worked hard to instill a collaborative culture in the department’s systems group-- as Sandhya notes, “making the whole greater than the sum of the parts, and it is certainly what drew me to the computer science department here. “

And I have to add that Michael's vision about research and the University, and the benefit of collaborative research, and the types of research that go on here, is also what brought me to Rochester.

That could be considered a form of service, an often underappreciated part of what an outstanding faculty member does. And it is but one example of the service Michael has contributed over the years.

He has played an active role in the University’s senate executive committee, as well as serving on the search committee for the dean of arts, sciences, and engineering. He is tireless in each of the service roles he takes on, making sure to contribute well above and beyond what is required of the role. It therefore comes as no surprise that he was the nominee of choice to co-chair the University’ Advisory Committee for the current presidential search.

I could go on and on about all of Michael's outstanding achievements, but instead let me quote something Michael said, in the way of advice to students, when he accepted his Goergen teaching award:

“Be a generalist! Take advantage of the interdisciplinary opportunities that Rochester has to offer. Never again in your life will you have a chance to learn so much about so many different things. If you are tempted to ‘get your clusters out of the way’ so you can focus on your major, think again. Life after college has a way of forcing you to narrow your horizons; don’t be in a hurry to do it any sooner. And if you are tempted to plan your courses around preparing for a job, think again. Job skills are great, but wisdom is greater.

“The founders of American higher education believed deeply in the liberal ideal: the development of a well-rounded intellect and of solid moral character. Those assets may not be as fashionable as they once were, but their value is undiminished. If you take a wide range of courses — if you let your interests expand and follow them wherever they may lead — you will find that college is much more than a meal ticket: it’s a ticket to a more fulfilling life.”

Now if that doesn't say it all, I don't know what does.

It is my absolute pleasure to present Michael with the 2018 Hajim School Lifetime Achievement Award.