Inventor’s goal is to ‘add information’ with optics 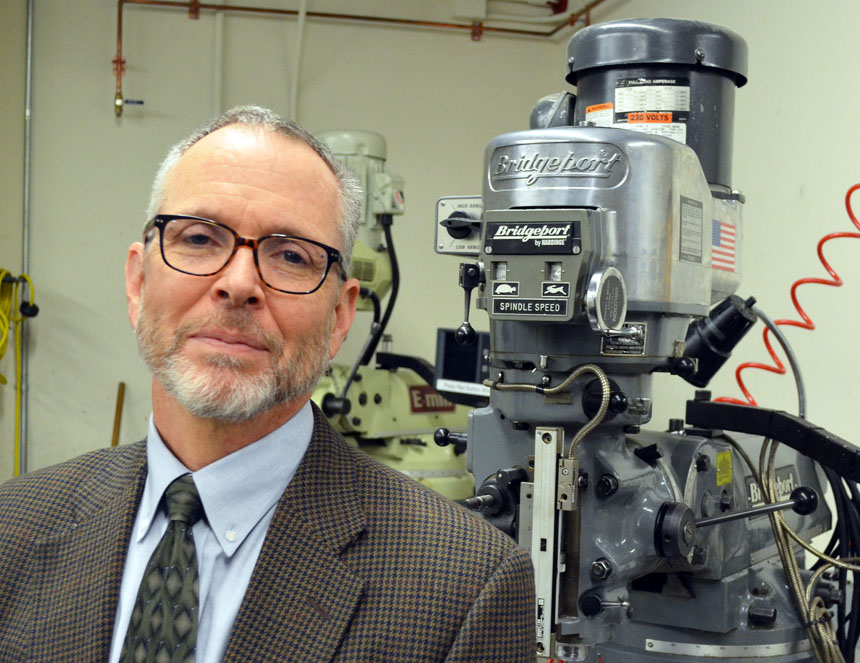 Jim Zavislan’s optical systems have protected the integrity of the ballot box, helped preserve great works of art, and allowed surgeons to determine on the spot if they’ve successfully removed a skin cancer.

The Institute of Optics associate professor is also developing tools to assess the damage we do to our eyes by staring at mobile devices.

“The idea is to use optics to add information for decision makers,” says Zavislan, who holds 63 U.S. and 151 foreign patents. “That’s been a theme throughout my career.”

In recognition of his achievements, Zavislan is the third Hajim School researcher in as many years to be inducted as a fellow of the National Academy of Inventors. The academy was founded in 2010 as a way to highlight academic invention and the important role that patents play in university research and innovation. Previous University of Rochester recipients are Kevin Parker, the William F. May Professor and dean emeritus of engineering, and Wayne Knox, professor of optics.

Zavislan, a 1981 BS and 1988 PhD graduate of The Institute of Optics, grew up in Littleton, Colorado. From an early age he was interested in science. And as a teen he learned valuable lessons by working in construction and a machine shop -- and grinding his own telescope mirrors the hard way.

“I would put a piece of glass on a 55-gallon barrel half-filled with water, and would walk around the barrel, pushing the glass back and forth,” Zavislan recalls. For even a small mirror, this might take 80 to 90 hours. “My parents were actually worried about me because I spent just hours and hours doing this.”

However, his interest in astronomy helped him connect with F. Jack Eastman, a legend in amateur telescope design and an accomplished Martin Marietta optical engineer. Eastman became Zavislan’s mentor, teaching him the rudiments of lens design. He also urged Zavislan to attend The Institute of Optics.

After graduating, Zavislan worked four years as a research staff member at the IBM Research Division. He co-founded Lucid Inc. with Jay Eastman ‘74, another PhD graduate of the Institute and Zavislan’s PhD advisor. Many of Zavislan’s patents resulted from his work as Lucid’s senior vice president for technology and chief technical officer from 1992 to 2002.

The Accuvote project was particularly “fascinating,” Zavislan says. “One of the biggest challenges with paper ballots is that people don’t follow directions.”

Instead of coloring in a dot, for example, they might put a slash or check mark through it. Or use the wrong color of ink or pencil. So, Zavislan and his team asked senior citizens to mark sample ballots, then applied the same technology they used for the Colortron spectrophotometers to determine the best wavelength and algorithms for detecting all the various ways the ballots were marked.

Experiences like the Accuvote project help inform his advice for budding inventors.  First and foremost: “understand the kind of problem you’re trying to solve,” Zavislan says.

Don’t get hung up on the first idea that comes to mind. “Usually the idea you start with is a door or a gate to a much larger area of exploration,” he says. “Ask a lot of questions of the people who will be using the invention to find out how it can best add value.”

“Don’t fall in love with your idea, but the solution.”

The problem with not blinking

When Zavislan finishes a six-year term as associate dean of the Hajim School of Engineering and Applied Sciences at the end of the academic year, he will have more time to devote to his current project:  Assessing the damage that is done to our eyes when we stare at mobile devices.

The problem is that people don’t blink nearly as often when they bend their heads to look downward at their smartphones, Zavislan says. And even then, they only “half blink.”  This interferes with the eye’s “windshield” mechanism that establishes and maintains the eye’s tear layer, potentially causing the layer to degrade.

“For most people, this is just a nuisance,” Zavislan says. “But if you don’t treat it and manage it, it can lead to more serious things.”

The resulting irritation to the eye is also the “most common complaint that people bring to ophthalmologists and optometrists,” Zavislan says. “And because it is being found more and more in younger people, we really want to be able to characterize the extent of the effect.”

Zavislan’s lab, working with the Flaum Eye Institute and the Center for Visual Sciences, has developed clinical prototype instruments to document the damage. “Now we’re trying to commercialize them.”

The instruments would help determine treatment options. “Sometimes you just literally have to tell people to blink,” Zavislan says. “In fact, everybody who uses a digital display should periodically look up and blink hard.”