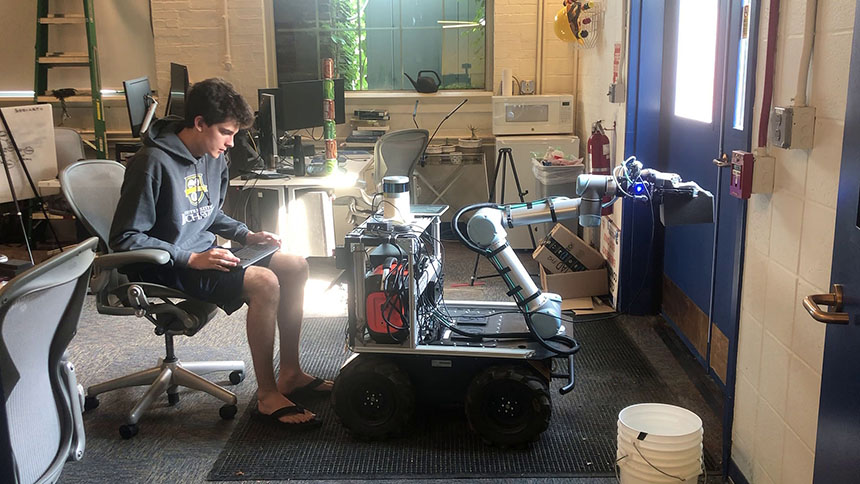 Ethan Fahnestock using a Clearpath Robotics Husky A200 Unmanned Ground Vehicle -- outfitted with a Universal Robotics UR5 Manipulator and Robotiq 3-Finger Adaptive Robotic Gripper – to open a door using software he and his collaborators developed in the University of Rochester Robotics and Artificial Intelligence Laboratory.

The Robotics and Artificial Intelligence Laboratory at the University of Rochester is a high-ceilinged, inviting space that is home to an array of unmanned vehicles, robot manipulators, and small humanoids.

On any given day, it would not be a surprise to find robots driving around to build maps of the laboratory, picking and placing objects on a table, or scanning tissue phantoms to advance medical imaging technologies.

It is a dream come true for students like Ethan Fahnestock ’21.

In this shared workspace, Thomas Howard, Wilmot Assistant Professor of electrical and computer engineering, and the undergraduate and graduate students in his lab can freely interact. They investigate algorithms and models for robot intelligence and human-robot interaction in complex, uncertain, and dynamic environments. A focus of the laboratory involves developing collaborative robots for human-robot teams.

“This has definitely been the central focus of my education,” says Fahnestock, a dual physics and interdepartmental engineering major from Madbury, NH. “It’s an open, collaborative workspace, so if I have a question it’s been easy to talk to people.” The lab members are “very lucky,” he adds, because Howard is “very engaged with his students, meeting with them every week to check up on projects.

“It’s been a unique experience and has really narrowed my career focus towards going into academia and pursuing a PhD.”

Fahnestock is well on his way. This spring, he was one of 396 students nationwide to receive a prestigious Goldwater Scholarship, awarded to college sophomores and juniors who show exceptional promise of becoming the nation’s next generation of leaders in the natural sciences, engineering, and mathematics.

"Ethan has made exceptional strides as an undergraduate researcher,” says Howard, citing two recent refereed conference/symposium papers, one with Fahnestock as lead author, the other as co-author. “He has developed a strong foundation in robotics by taking core courses in electrical and computer engineering, computer science, and mechanical engineering and advanced electives in robotics.

“He shows significant promise as an experimental roboticist who can develop ideas and perform experiments on physical systems.”

Open curriculum was a draw

“Classic LEGOS get a lot of the credit” for sparking his interest in “tinkering with things,” Fahnestock says. This led to more advanced tinkering with arduinos. Then after he was introduced to programming, Fahnestock also enjoyed the challenge of “seeing what computers could do” as part of his projects.

He grew up mostly in New Hampshire, except for three years in Fairbanks, Alaska, where he attended middle school. Chris Pastro, a teacher who directed the Extended Learning Program at the school, had big influence on Fahnestock. “We did all sorts of cool mini projects, like trying to build a chair using only newspapers and scotch tape,” he says. At the end of the week, everyone would get together with their chairs, “and a daring person would sit on them, and see how long it would support them.”

James Thibault, a physics high school teacher, sparked his interest in that subject.

Though his father is a University alumnus, Fahnestock didn’t have Rochester in his sights until he was awarded a Bausch and Lomb scholarship during his junior year of high school.

When he eventually took a closer look at what the University had to offer, “I loved the open curriculum; I loved the freedom to choose, the fact that you don’t get stuck in language classes if that’s not what you’re passionate about,” Fahnestock says. During a visit to campus he met Howard and watched him use a robot in one of his classes. He was impressed with Howard’s “energy” and the research problems he was working on. All of these factors helped persuade Fahnestock to enroll at Rochester.

He has not regretted that decision.

“I think I’ve been very lucky. I am grateful for the support of the passionate staff and advisors at the University specifically Linda Cassidy (Department of Physics undergraduate coordinator) and Lisa Norwood (assistant dean of the Hajim School), who have put in significant effort to help me get the most out of my degree program,” he says.

“My experience so far has been that if you have a good reason to explore something, you can find a way to do it.”

Fahnestock did not waste any time. He persuaded Howard to let him enroll during his first semester in ECE 231, a course not normally available to first year students. “It was really my introduction into the formalisms behind robotics,” Fahnestock says.

A roommate persuaded him to also join the Baja SAE student team during his freshman year. The team designs and builds an off-road vehicle for competitions against teams from other universities. Fahnestock quickly became involved in “working on getting the car covered with sensors so we know exactly what’s going on when it’s out on the track,” he says. He also got to know the team’s mechanical engineering faculty advisors, Chris Muir and Sheryl Gracewski, now an emeritus professor. He began taking some of their courses, including solids and senior design.

So, at the same time he was pursuing a major in physics, he was also creating the basis for a second major in interdepartmental engineering,  which allows highly motivated students to design their own major if their interdisciplinary curiosity and career ambitions cannot be satisfied by a traditional, preexisting one.

He participated in a REU (research experience for undergraduates) program at the University of Texas Rio Grande Valley in the summer of 2018. He then assisted with Howard's Upward Bound Math/Science module on Robotics this past summer, a broader impacts activity supported in part by one of Howard's sponsored research projects from the National Science Foundation National Robotics Initiative. The Upward Bound program is designed to develop and foster an interest in science, technology, engineering, and mathematics among local high school students.

“Ethan is generous in sharing his developing expertise,” Howard says.

Making an impact on the world

After graduating, Fahnestock would like to pursue a PhD in robotics, conducting research to improve the ability of robotic systems to function in unstructured environments. And then what? Academia or industry?

“I am not opposed to either at this point,” Fahnestock says. “Both paths appear to support careers tackling problems that limit robots from intelligently interacting with unstructured environments.”

A major appeal for working in robotics is that “there is a lot of flexibility on the problems that you’re working on,” he says. “You might spend a large chunk of your time on one problem, for example path planning, then pivot to a different problem limiting robotic systems, such as language understanding or perception.”

The field is also appealing, he says, because of the close ties between industry and academia.

“A lot of professors hold positions at different companies, or transition back and forth. There’s a lot of industry participation in conferences. I’ve been at conferences where companies have a lot of booths, trying to sell robots to researchers or recruit them to work on their projects.

“A researcher can quickly pivot and have a direct impact on industry.”

Inspiration is important, Fahnestock says. Equally important, however, is understanding how to translate a great idea into something that can actually be mass produced and have an impact on the world.

“Having a product at the end of the day that you can go test is always great.” 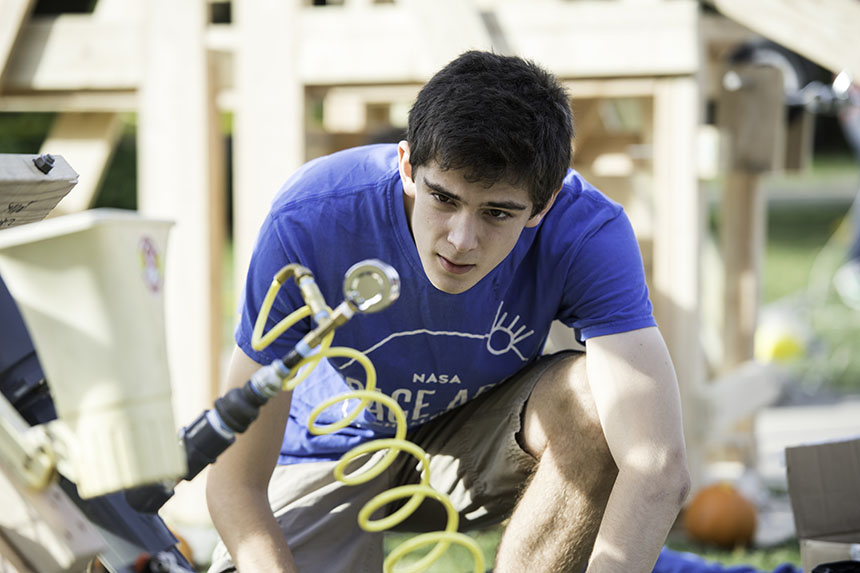 Fahnestock eyes the air pressure gauge while teammates from the Department of Physics prepare their air cannon during the 2018 Pumpkin Launch competition on the Wilson Quad. Whether participating in a pumpkin launch, or a Midnight Mayhem endurance race with Baja SAE, Fahnestock enjoys the teamwork that goes into designing and building something, then testing it in a competition.