Vivid snapshots of China in transition 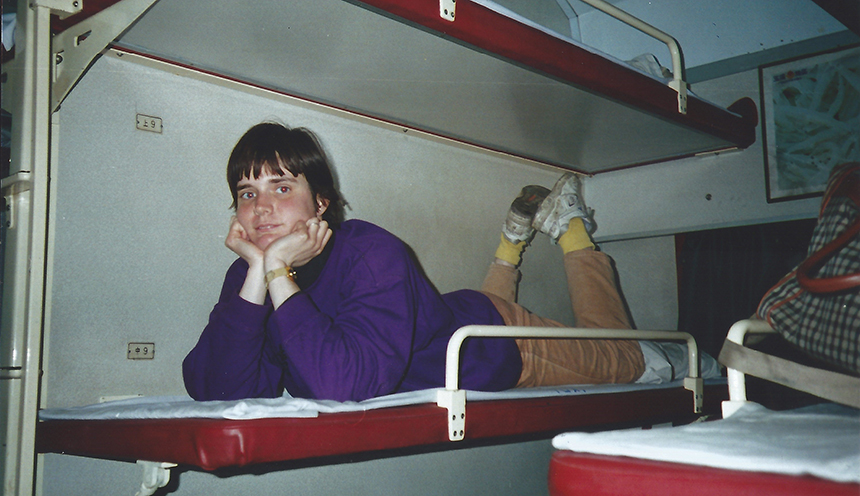 Emily Hackett '95 frequently traveled by train to visit far-flung corners of China during the year she studied at Tsinghua University in Beijing. (Photos courtesy of Emily Hackett)

Early one wintry morning, during an extraordinary year spent in China, Emily Hackett ’95 (T5) left her bicycle with a mechanic for repairs. Delayed by other errands, she did not return that afternoon. The mechanic waited up for her, late into the night at his small repair shed, catching a severe cold that laid him up for several days.

Since tipping was not an accepted custom in China, Hackett “thought long and hard about how to repay the mechanic for his troubles.” She decided to offer the mechanic a bag of mandarin oranges the next time she took her bike for repairs.

The mechanic refused to accept them. “I set the bag on the ground and walked away,” Hackett recalls. The mechanic hurriedly put them back on her bike before she could ride away. “I took them out and offered them again, but my hand was pushed back. Oranges rolled across the hard-packed dirt.”

She gathered them up. And, again, her offer was doggedly refused.

“Finally, I gave up and rode away. I was eating the oranges for a week.”

A unique opportunity at a critical time

Encounters like this one allow Hackett, a mechanical engineering alumna who is now a software engineer with Intel, to paint an intensely personal, but revealing picture of what it was like, learning to navigate cultural differences as a foreign student in China.

Her self-published memoir, Ghost Years: Recollections of an American student in 1990s China, offers snapshots of the country as it transitioned from a developing country to a superpower.

Hackett was inspired to write her memoir three years ago while serving as an alumni volunteer conducting college admissions interviews for her alma mater, the University of Rochester. One of her interviews was with a student from China, attending a private high school in the U.S. The student--upon hearing that Hackett had spent a year at Tsinghua University in Beijiing in 1995-96--immediately wanted to know more about her experiences.

Hackett was one of the few American students pursuing mainstream engineering studies in Beijing in 1995–years before most schools set up formal study abroad programs in China. So, she was uniquely positioned to capture snapshots of what “turned out to be an ephemeral world.” Despite all that had happened in previous years and decades, China was nonetheless starting to open up to the Western World, promoting economic capitalism and tolerating religions.

Thanks to friendships she established with other foreign students and with her Chinese classmates—and thanks to her own fearlessness—Hackett boldly explored broad swathes of the country, its culture, and society. And in doing so, she was exposed to many of its complexities and contradictions.

She spent holidays or visited with Chinese families in cities as far flung as Kunming and Urumqi. She ventured alone into the outskirts of the Gobi Desert. She spent a night with a Kazakh family in their yurt in the far northwestern province of Xinjiang.

She haunted the underground bars frequented by foreign students in Beijing, wandered through a Shanghai tenement, but also attended Chinese trade shows as a representative of the U.S. Embassy.

Her narrative is remarkably detailed in its descriptions. The dankness of the ubiquitous, government-built concrete apartments, for example, with interior walls invariably painted pale green to chest level, then white above. The cabbages, piled inside doorways and mounded behind restaurants as a winter food staple, gradually browning and rotting with the approach of spring. And, always, the infamous Beijing smog. In winter, it was thick enough to literally coat her clothing with soot.

But Hackett was exhilarated by the beauty of many of the places she visited, including the glacier-fed Lake of Heaven, and even a field of tea bushes cultivated in a woodland clearing that felt “hidden and enchanted.” Staring upward that moonless night while staying with the Kazakh family, Hackett writes, “was the first time I had ever seen the night sky without light pollution, and I exclaimed in amazement at the multitude of stars.”

During a trip to a club, she found it ironic—and troubling-- that a Chinese classmate she had befriended would vehemently defend government-ordained banning and burning of certain books, even as the Bob Marley lyrics “stand up for your rights” played in the background.

But she also was impressed with China’s determination to make more of itself.

“China had made gains that other so-called developing countries had not,” Hackett writes. “Literacy was almost universal, partly through a reworking of the Chinese writing system to ‘simplified characters.’ They had brought electricity to every county . . . People were out of the communes that had defined the darker days of the cultural revolution and lived as families in private apartments. Private enterprise was being encouraged.”

So, “it was hard not to see something admirable in the determination to provide for the basic physical needs of all, even if the concepts that we Americans elevate as life, liberty and the pursuit of happiness went unacknowledged.”

UR was the perfect springboard

Hackett, who grew up in Glens Falls, NY, says she became interested in science and engineering at an early age. She also became fascinated with other languages and cultures, starting when she first heard Spanish on Sesame Street.

“It was a terrific experience because of the ways that Rochester looks to educate the whole student,” Hackett says.

While at Rochester, she lived in the International Living Center, a special interest dormitory that focused on exposure to world cultures and diverse points of view. The University’s unique Take Five program allowed her to remain an extra year, tuition free, to study linguistics, Chinese, Spanish, and German.

She credits three of her mechanical engineering professors in particular – Stephen Burns, Alfred Clark, and James Li—for encouraging her interest in studying abroad in China and helping her organize her trip and obtain a prestigious National Science Foundation fellowship to help pay for it.

Li, who grew up in China before and during World War II, helped make the final connections for Hackett to study at Tsinghua University. The renowned researcher even gave Hackett an internship so she could spend time working with several Chinese students in his lab the summer before she left, “so I could practice the language and do some science,” she says.

Hackett arrived in China, largely naïve, but eager to learn. So, her memoir is as much about what she learned about herself. The merits of study abroad and of engaging globally are clearly evident, as Hackett becomes more comfortable in her surroundings – and more confident in herself. 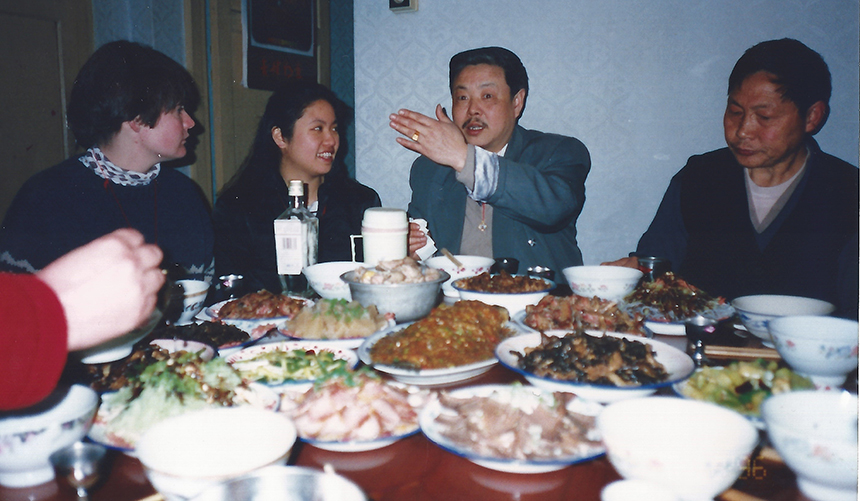 Hackett partakes of a Chinese New Year celebration meal with a family in Deyang. After the meal, the dishes were cleared from the table to spread tiles for a game of majiang, which intrigued Hackett. 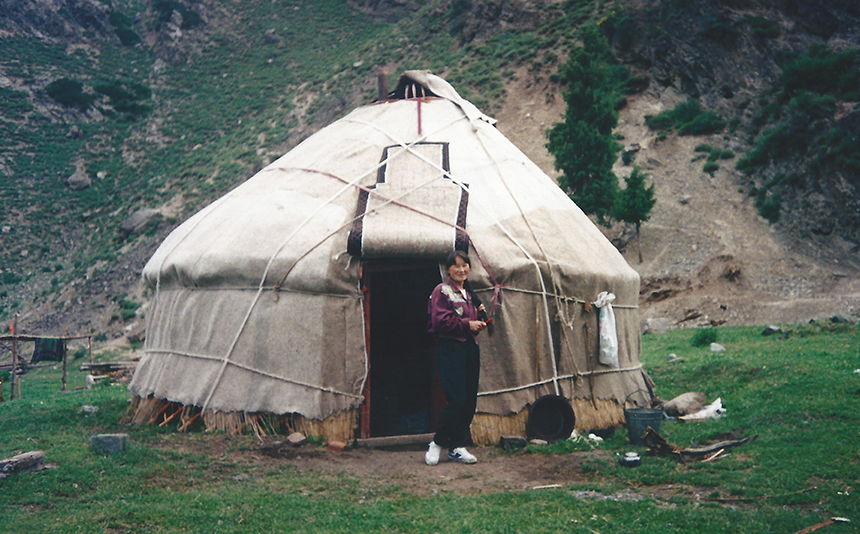 The yurt where Hackett spent the night with a Kazakh family near the Lake of Heaven.