Tram Nguyen ’22 doesn’t do anything halfway.

Which is pretty extraordinary considering all the activities she’s been engaged in since arriving at the Hajim School from Vietnam in 2018.

It seems like there isn’t anything Nguyen won’t try. When she was invited to participate in the University’s DandyHacks hackathon last year, Nguyen decided to try programming. She entered the hackathon as part of a team that won a prize for an app that tracks and stores an individual’s location data over two weeks for COVID tracing purposes. By December she had won nine prizes at other hackathons. (Read more about her projects here.)

Nguyen has also been gaining valuable hands-on experience as an undergraduate researcher at the therapeutic biomaterials lab of biomedical engineering professor Danielle Benoit, who creates hydrogels for drug delivery and tissue repair, as well as an Emergency Department research associate, and as a technical assistant in the RNA Metabolism Lab and Structural Dynamics lab at the Medical Center.

“My mom tells me a lot: ‘If you’re going to do something, you better do it all the way.

And the more new things she can try, the better.

“I’m like a kid who never grew up,” Nguyen says. “When you’re a kid, everything seems so new and amazing. Like the first time you see how a volcano works. I still enjoy that process of discovery and enjoying the feeling of ‘Wow, so that’s how that works.’” 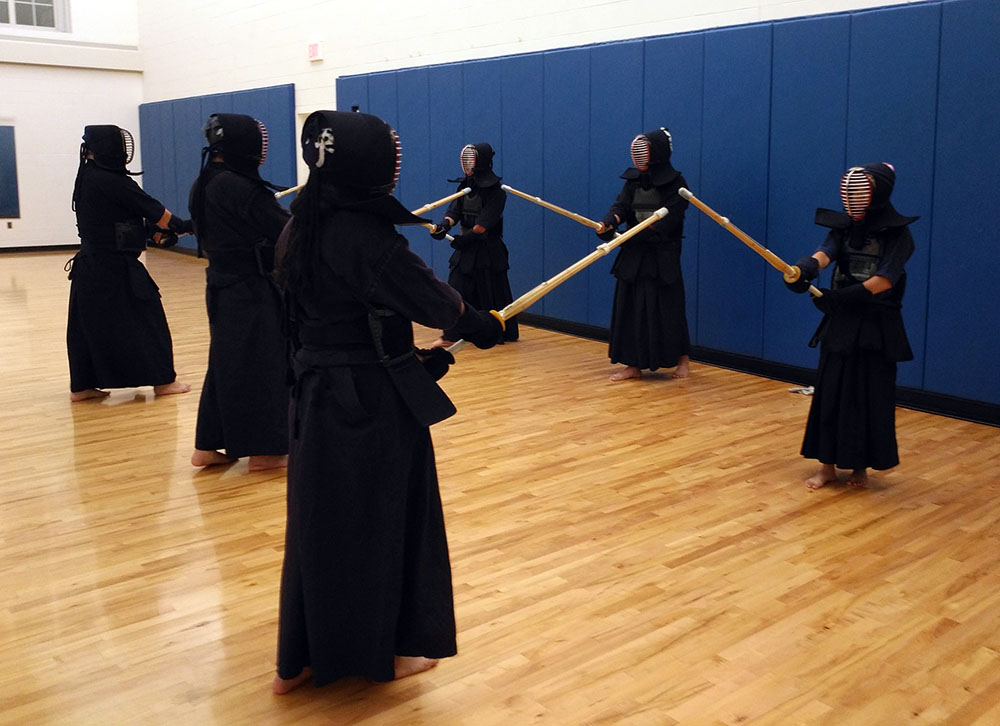 Tram Nguyen—shown at far right—is president of UR Kendo, a martial arts that interested her because it teaches self-defense, but also combines self-meditation with sword skills. The protective body armor enables even beginners to safely spar “all out,” Nguyen says.  “The fun thing about kendo is that it is one of the few martial arts or sports where being short and small actually is actually beneficial!”

Why she chose science over linguistics

Nguyen was born in Ho Chi Minh City, Vietnam, and grew up there-- except for about three years. Between the age of 5 and 7 she lived in Perth, Australia, with her mother, a loan officer, who went to Perth to complete master’s degrees in finance and business administration. While in Australia, Nguyen learned English (she’s also fluent in French and Japanese), which she continued to study in school when she returned to Vietnam.

Nguyen later qualified to attend a Vietnamese high school for gifted students. She was accepted into the school as an English linguistics student and was expected to confine her studies primarily to that subject.

However, the science club was open to all students.

“I enjoyed the science club because they were a bunch of cool, very brave people,” Nguyen says. “We did some crazy stuff, and of course mishaps occurred. We’d fire a rocket into a tree, and it would get stuck, and then we’d fire a second rocket at it to try to get it down. It was probably not a smart thing to do!”

Nonetheless, thanks to the science club, Nguyen realized her real interests were now in that area, which posed a dilemma. If she stayed at the gifted school, she would have to continue her studies in linguistics, which no longer interested her nearly as much as when she started.

She decided to come to the United States to continue her education.

Glad to be in Rochester

Her first stop was Miss Hall’s School in Pittsfield, Massachusetts, where she spent two years completing her GED so she could be accepted at a US university.

In addition to taking classes, she was varsity science bowl captain, science club president, robotics club president, president of the international student alliance, editor in chief of the school newspaper, and a peer tutor for AP biology.

Nguyen considered several universities, including Northeastern and NYU, but of all the similarly ranked schools, the University of Rochester offered the best financial aid package.

“It’s actually worked out great,” she says. “Because the BME degree is pretty heavy on its own, people wonder how I can do economics as well. I’ve overloaded (on courses) every semester, but I also came in with AP credits, which definitely helps.”

Also, “the moment I stepped on campus I drew out my four-year curriculum plan of what I needed to take.”

Her favorite teacher, she says, is Michael Rizzo, lecturer in the Department of Economics and her academic advisor, who received the Student Association Professor of the Year Award in Social Sciences in 2017.

“He teaches economics in a very non-traditional way, that really gets you thinking,” Nguyen says. For example, Rizzo starts one class by handing out money to the students, urging them to accept the money as a gift. Very few students actually accept the money, Nguyen says. It is an interesting experiment in how social norms and agreements regulate the choices people make, in this case about proper behavior in a classroom.

Her favorite place on campus is the Fabrication Lab in Rettner Hall, where UR Makers gather to do projects. “I actually stay in the lab more than I stay in my dorm,” Nguyen says. “Jim Alkins (the fabrication shop manager) calls it my second dorm.”

Nguyen says “it’s really a bummer” that she has not been able to return home to Vietnam for  visits since March 2020 because most countries aren’t accepting flights from this country due to the pandemic. Even so, Nguyen says, the hybrid instructional model adopted last semester has allowed her to attend classes, see professors, and experience at least a semi-normal University of Rochester experience.

Her goal is to be an innovator

Nguyen says she would prefer to pursue a career in industry, rather than academia. “Academia is a little too much research-based and theoretical,” she says.  “I like more of a hands-on approach, seeing how things work and, as in industry, following through to a finished product.”

“However, I know that especially in a biomedical engineering career, you need a graduate degree. So, after I finish as an undergraduate, I will do a master’s, perhaps in materials science. Or, if I want to do drug development, a master’s in pharmacology.”

Rochester’s Center for Medical Technology and Innovation (CMTI) master’s program in medical device design is also “very high” on her list of possible programs to apply to, she says.

Ultimately, Nguyen says, her goal is to be an innovator like Elon Musk, the CEO of SpaceX, who has a knack for “coming up with crazy ideas and making them work.

“I want to have the skills and also have the financial ability so that I can pursue something that might sound crazy, but make it work,” she adds. “I don't want to be a person who draws up a ton of fancy projects that never get realized. Getting something from paper to actual product involves not only a good idea, but good marketing and an understanding of what people need. Creating a really niche product is cool, but it’s not going to work if it’s not going to help anyone.”

It is pretty awesome watching a pumpkin arc through the sky over the Wilson Quad at the annual Pumpkin Launch. The enthusiasm of the participating students can be pretty awesome as well. Nobody exemplified that more than Tram Nguyen ’22 and her UR Maker teammates at the 2019 launch. Nguyen,at left, yanked the lanyard on her team’s trebuchet on the first launch, then dashed over for excited high fives all around. Her team finished second that day but was clearly first in team spirit.