Elon Musk, the billionaire entrepreneur who recently launched the first all-civilian mission into space, has galvanized a collaboration of Hajim School engineering students to address a pressing issue on Earth: climate change.

More than 30 students are vying for a $250,000 prize as part of Musk’s XPRIZE Carbon Removal Competition by designing a device that removes carbon dioxide from the air and converts it into commercially viable raw materials.

“We are doing something that affects the whole world, because the problem we are trying to solve is a global one,” says Jane Agwara, a chemical engineering PhD student who is leading the project. “So being involved in this is really exciting.” (See video to learn more.)

Team members expect to learn this month or early next month whether their proposal has been accepted, entitling them to $125,000 to go on to the next stage of the four-year-long competition: building a prototype.

The Meliora Emissions team includes four graduate students and 29 undergraduates, ranging from sophomores through seniors. They include students majoring in chemical, mechanical, and electrical and computer engineering, and geomechanics.

The device will filter out carbon dioxide from surrounding air. The captured CO2 will then undergo reactions and be converted to raw materials.

And senior design projects involving mechanical engineering students would then assist with optimizing components used for the final design of the absorption column, including insulation, fans, valves, and piping.

Agwara says she was impressed by the number of students who volunteered to help with the project—and their enthusiasm. “They are really into it,” she says.

Danielle Getz ’23 of chemical engineering, was already studying catalysts for carbon utilization reactions as a research assistant in Porosoff’s lab. She’s addressing carbon sequestration as a National Academy of Engineers Grand Challenges Scholar. And when she’s not working in the lab, she enjoys helping to maintain a campus community garden as a contribution to sustainability.

Participation in the XPRIZE project has given her a new appreciation for the foundations of chemical engineering she learns in the classroom.

“One of the biggest things we struggled with was a heat and mass transfer problem, and that was really out of the textbook we use for our heat and mass class,” Getz says. “So, it has been really interesting to see how some of the things we’ve been learning in class directly apply to a problem we’re working on.”

Kai Avni ’23 of mechanical engineering, a co-president of the Engineers for a Sustainable World student chapter, says he was eager to join the project, and enlist other ESW members as well. He became interested in fighting climate change while attending high school in Panama.

“I grew up surrounded by nature. My teachers were very environmentally conscious and educated us in the importance of preserving the environment and the impact that climate change is having,” he says.

The XPRIZE project was yet another opportunity for him at Rochester to explore an area of sustainability he was not familiar with. “Carbon sequestration is going to be a huge player when it comes to the fight against climate change,” he says. He would like to help organize the senior design projects in mechanical engineering and is planning to apply for an additional year through the University’s E5 program, in part to work on the XPRIZE project.

“It’s going to take a lot of work,” Agwara says. “We have an idea, and we know how we think it could work, but the goal is to see this actually come together—to have prototype that enables us to do exactly what we are proposing to do.”

And if all goes well, the device might one day be licensed to one or more companies that can put it to actual use.

“If we can do that, it would be awesome,” Agwara says. 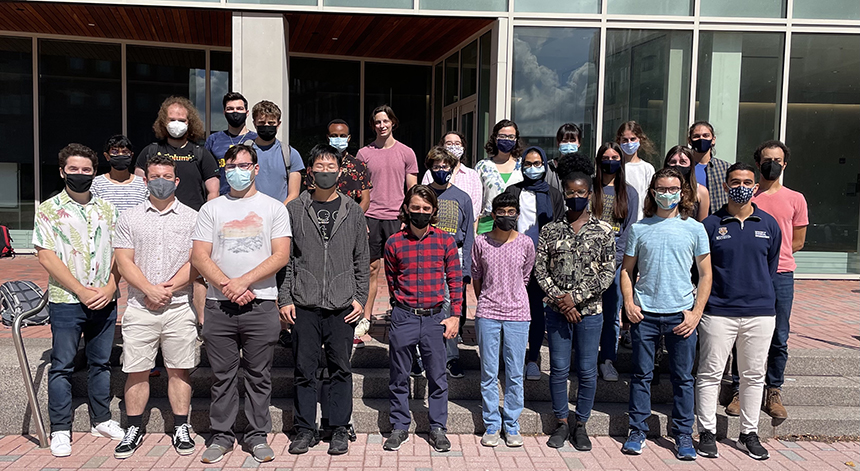 Members of the Meliora Emissions team.